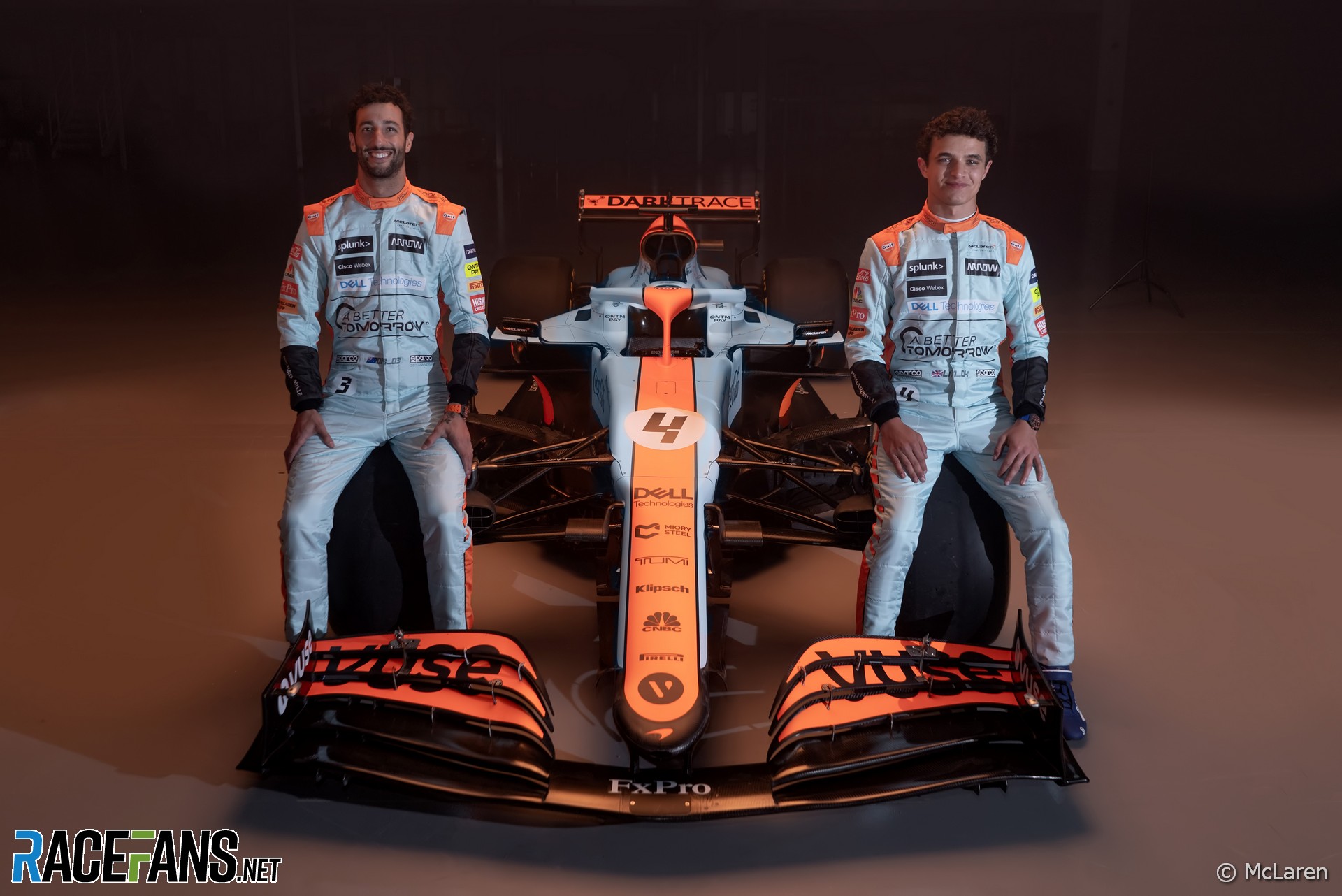 In the round-up: McLaren drivers Daniel Ricciardo and Lando Norris say Formula 1 should consider holding a special race for retro liveries, as NASCAR does.

McLaren have become the latest team to present a special livery for a grand prix weekend. Following Mercedes’ part-white livery at the 2019 German Grand Prix, and Ferrari’s burgundy-hued car which appeared at Mugello last year, they will use a special, one-off Gulf livery for this weekend’s Monaco Grand Prix.

At a media event last week where the livery was presented, the team’s two drivers reacted positively to the idea of holding a race especially for retro colour schemes.

“The proper old-school ones would be pretty awesome,” said Norris. However, he added, “it’s nice we are the only ones who are doing it” this weekend. “More eyes on us, unless we both crash into turn one.

“For one race, it makes it a bit more exciting. It would be cool to see everyone do something like that. Especially when you have a Williams or Ferrari [although] Ferrari would just be red. A lot of teams have had awesome and unique liveries over the years and it would be cool if everyone came up with their own.”

Ricciardo also reacted positive to the idea. “I’m aware it’s another expense for the team but that aside, for everything to be a throwback — not just our race suits, but casual wear, down to team hats, to properly do it — that would be cool for everyone to get involved.”

Since the #F4US drivers did not complete a full green lap in Race 1 this morning, it will not count toward points. The drivers will be gridded by the quali order from Saturday. The race will be made up later in the season. Race 2 starts at 1:10pm CT pic.twitter.com/U3vEvFTzhd

If @McLarenF1's one-off @GulfOilIntl livery for the #MonacoGP is really your thing, check out the history of the ROFGO collection – Roald Goethe acquired an example of every Gulf-liveried racing car.

"Our calendar is so busy, so if it meant kind of taking up another, let’s say long haul flight, and another free weekend, I’ll probably choose not to like the moment just to preserve all my energy for Formula 1."

"The teenager had to work hard for his laurels, though, as a late challenge from Englishman Toby Sowery (Juncos Racing) saw the top two separated by just 0.0283 of a second at the chequered flag on the Indianapolis Grand Prix road course."

"As an affordable customer engine, it shifted Formula 1’s balance of power from manufacturers to teams, setting the stage for Bernie Ecclestone’s commercial revolution."

There was a lot of approval for McLaren’s new livery yesterday:

Very nice. Zak Brown seems very good at this marketing lark. Just a simple change of colour scheme and the team will be the centre of attention at Monaco.