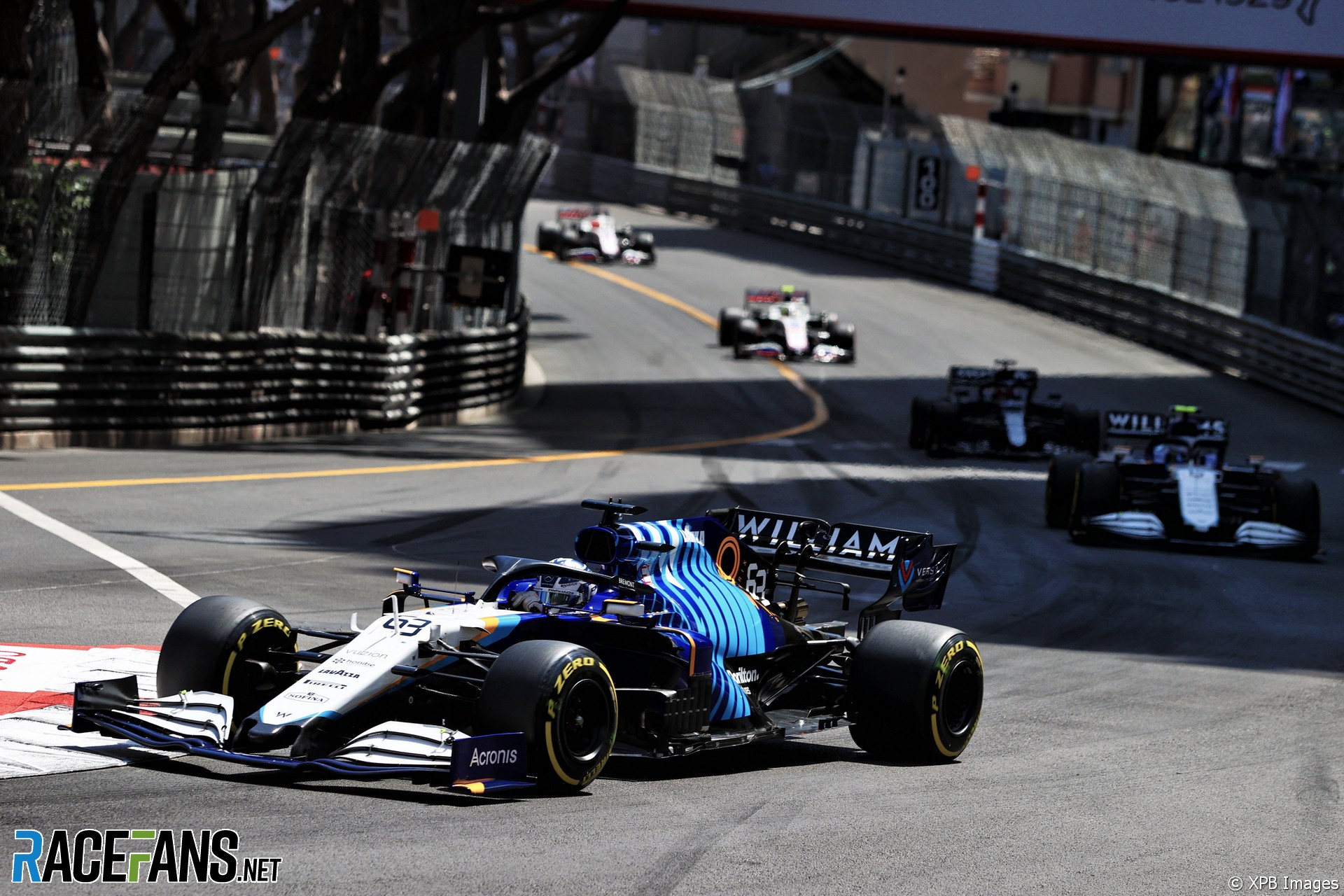 In the round-up: George Russell says he was stuck behind Daniel Ricciardo and Fernando Alonso during his first stint in the Monaco Grand Prix, while they struggled for pace.

George Russell has said that, although he finished the Monaco Grand Prix roughly where Williams would have predicted, his race was affected by Ricciardo and Alonso’s early stint struggles.

“It was pretty tough, to be honest. I mean, we finished where we expected to, so it was nothing too interesting in there. The first stint was really difficult for us, stuck behind Ricciardo and Alonso – they were really, really struggling for pace, for whatever reason.

“As a consequence I damaged the tyres a lot, which made me pit early and I came back out into traffic, so that that was sort of the knock on effects. We showed signs of a strong pace when we came out the pits on the hard tyres but as soon as we got the blue flags, we were losing tyre temperature and not much more we can do.”

Sainz “would have loved” to share debut Ferrari podium with Leclerc

Despite scoring his maiden podium since moving to Ferrari, Carlos Sainz Jnr said that the Monaco Grand Prix was “bittersweet” for him due to team mate Charles Leclerc’s retirement.

“At least we got a P2, a podium, which I’m sure it will help everyone’s motivation and aspirations. But yeah, the bittersweet feeling is coming from knowing that maybe a potential win went out of our hands. And I would have loved to share that podium with with Charles today.”

Petecof may be forced to withdraw from F2

Gianluca Petecof has said he may be unable to continue his Formula 2 campaign this season due to a lack of funding. He told Brazilian journalist Lito Cavalcanti that a lack of sponsors meant he would be unlikely to make the grid for F2’s next round, in Baku.

Petecof, the current Formula Regional European champion, had issues on his Campos car during the Monaco race weekend that limited his running. A fire on the car during practice went on to compromise his qualifying, before retiring twice in the sprint rounds and finishing 16th in the feature race.

He would be the second F2 driver to withdraw from the series on financial grounds this year, after Matteo Nannini, originally set to run a joint F2-F3 campaign, said his sponsors would no longer back him in F2 after the first round.

.@Carlossainz55 did more than a French Grand Prix distance this morning with @ScuderiaFerrari: 75 laps on the 2022 intermediate #Fit4F1 18-inch tyres! Not bad for a morning's work. He's back for more in the afternoon, on the full wets. @fia @F1 pic.twitter.com/rCQ3MpFi7c

"Speaking to Sky Sports F1 at the Monaco GP, Hamilton said his Commission was now in the closing stages of its research before presenting its findings and recommendations. 'I'm really excited,' said Hamilton. 'It's just coming to the closing end of the research.'"

A murder the world witnessed: How sport joined the fight for change (BBC)

"'There are still some people who don't fully understand what is happening and the reason for these protests,' Hamilton said. 'I continue to try and be that guide, to influence as many people as I can with it.'"

"Fittipaldi defied that diagnosis and returned in 2 1/2 months, while his legs were still healing, and later that season finished an IndyCar career-best ninth at Portland thanks to the help of a specially created cast and an aggressive rehab program. 'I had to go through a lot of things when I had the accident, overcoming that, and being able to overcome it mentally, as well,' he said."

Bruno Michel's debrief: It was special to watch this grid master the streets of Monaco (Formula 2)

"At 17 years old, Théo Pourchaire has scored his maiden F2 pole position and Feature Race win, in Monaco no less! It was his first time driving on the prestigious and highly demanding track… Watching him grow in Formula 3 last year, we knew he had great potential, but we did not necessarily think he would fully show it in F2 by round two, in Monte Carlo."

"For sure other drivers test me out sometimes to see what I am made of – to see how far they can push me but they would do this regardless of my gender. I’m confident, I have a strong competitive spirit and I thrive on a challenge."

W Series to be shown on Channel 4 (W Series)

"W Series continues to break down barriers as it today confirms the continuation of its free-to-air broadcast partnership with Channel 4 for the 2021 season. In line with its mission to promote diversity in motorsport, W Series’ on-screen commentary team will consist of equal numbers of women and men. Lee McKenzie, David Coulthard and Ted Kravitz – who presented W Series’ inaugural season in 2019 – will be joined by Anna Woolhouse, Alex Jacques, Amy Reynolds, Billy Monger and Naomi Schiff, who drove for W Series in 2019."

"Thanks to new technology, Sam Schmidt, an Indy car driver who was paralyzed from the shoulders down 21 years ago, is walking again for the first time – and danced with his daughter at her wedding. "

MaddMe says a better resolution to red-flagged Q3 sessions would be to extend time for drivers to set a fastest lap, rather than penalise a driver who had crashed.

The easy and sensible option would be to allow an additional 5 minutes to the session, to allow for teams to get there cars out again for a final push, rather than the resorting to deleting the fastest time for the misfortune of having an accident!

The stewards should also be able to review the relevant incident and make a decision whether they believe it to be done purposefully or not. Ultimately, what will happen is that teams will not risk a 2nd lap in any of the sessions.

Formula 1 is Formula 1 and not Indy Car!
@maddme