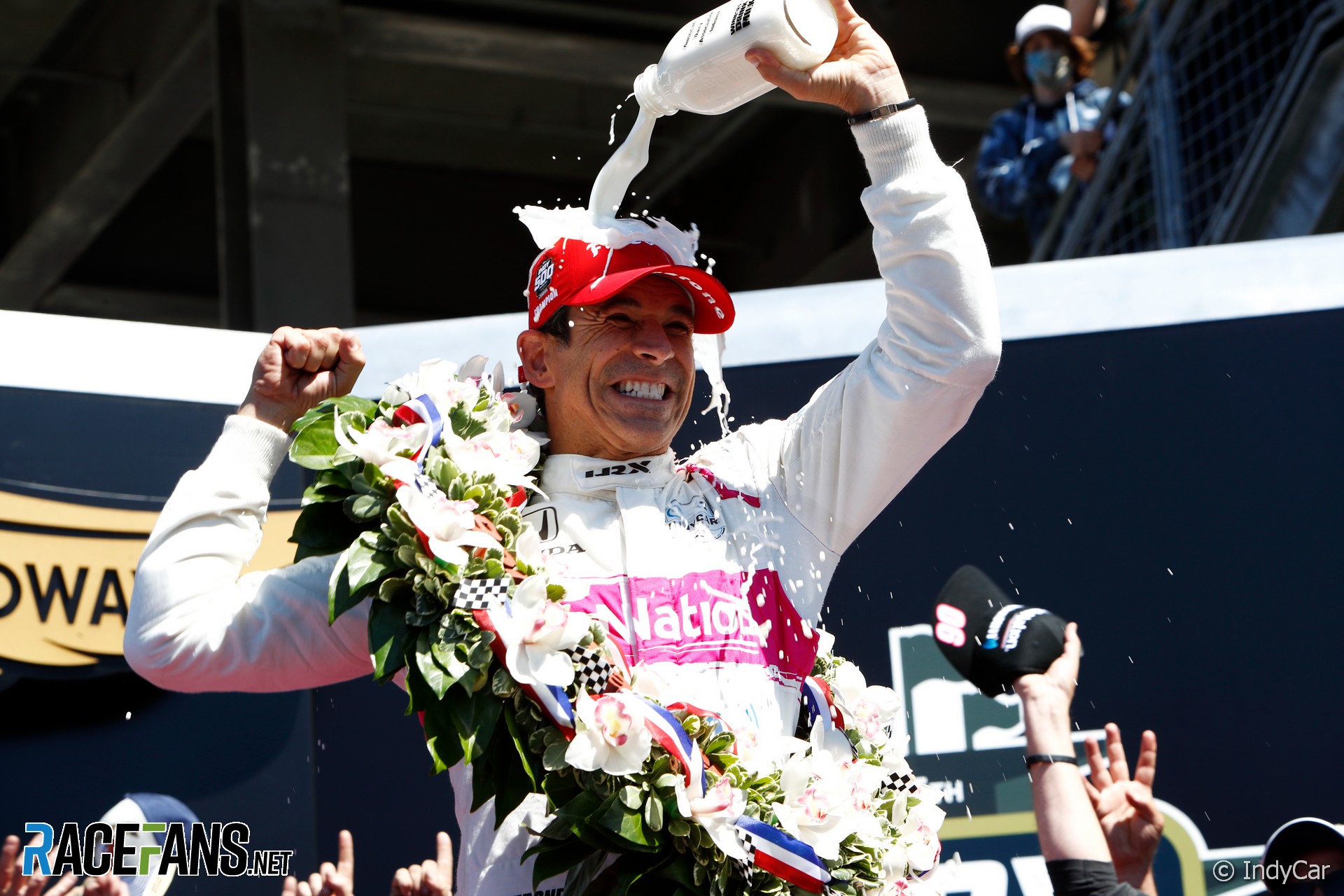 Helio Castroneves explained how he took advantage of a wave of slower traffic in the final laps of the Indianapolis 500 to beat Álex Palou to victory.

The 46-year-old said he had to use the backmarkers to stay ahead of Palou, who was quicker than him in clear air.

“I knew the potential of my car. I knew exactly what I had to do,” said Castroneves in the post-race press conference on Sunday evening. “When I saw traffic coming before me, in front of Palou, I said, ‘I got to get that right because that’s what is going to help me.”

It was clear from practice that overtaking was much more difficult when several cars were running nose to tail, said Castroneves.

“In practice you have five cars, six cars, everybody lined up, nobody passing each other,” he explained. “With 25 laps into the tyres, I don’t think he’s going to be able to pass me either. That’s what I was thinking. Turned out to be the right thought.”

Castroneves admitted he couldn’t lap as quickly as Palou could in clear air.

“He was very good. He was very fast,” said the Meyer Shank driver. “The Ganassi guys did a great job.

“They were very, very strong on their own. They really were able to do some amazing laps. I think it was almost 221 [miles per hour]. I tried myself, and I couldn’t do it. I decided just to wait for the right opportunity.”

After Palou lost time lapping Felix Rosenqvist, Castroneves made what proved to be the race-winning manoeuvre, lining up the Ganassi driver as they began to penultimate lap. He swept around the outside into turn one as the pair closed on another group of backmarkers.

“My strong corners were both two and four, I knew that,” said Castroneves. “It’s just a matter of waiting for the right opportunity.

“When I saw the traffic – it was a bunch of it actually – I’m like, ‘That’s it, I’m not going to wait because I need that traffic to pull me so I can get the same speed.’ When I made the move, I said, ‘That’s it.'”

Castroneves described the tense moments as he rounded the final lap with Palou in close pursuit, the pair drawing closer to the cars ahead. “When I saw Hunter-Reay in front of me, [I thought] ‘Is he going to block? What is he going to do? I don’t know.’ I tried to make sure that Palou wouldn’t divebomb me. It was perfect.”

Having qualified eighth for his first race with Meyer Shank, Castroneves said he knew he had a quick car for the race. “I felt that my car was very good since after qualifying, after that practice,” he said. He told Meyer Shank Racing co-owner Michael Shank “don’t touch it, the car is really good.”

“The car was so good, so I just had to make sure that I stay there in the end,” Castroneves explained. “Once the pit cycles came in, I was in second place with Palou. Pato [O’Ward] came to play a little bit. I was like ‘just keep doing what I’m doing, understanding what I need to do.’

“I was having a little bit of vibration towards the end, but it didn’t bother me. I just kept on it, make the right tools to change the car a little bit. When I crossed the finish line, I was like, ‘Can you believe it? I don’t believe it.”

His record-equalling fourth Indianapolis 500 victory came 12 years after his third. The 46-year-old said he learned a lot from the near-misses which came in the intervening races, including a pair of agonizing runner-up finishes in 2014 and 2017.