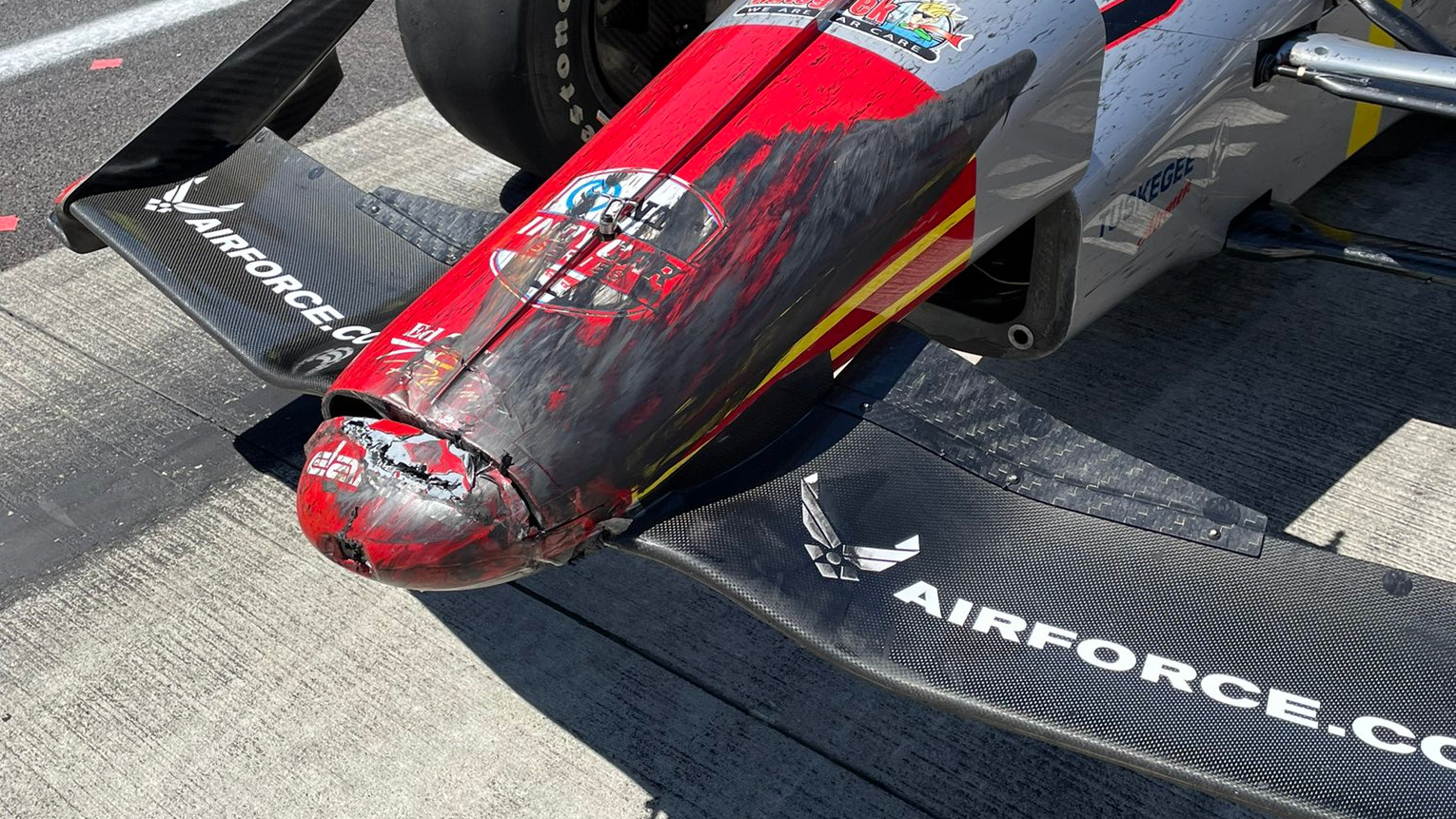 A spectacular collision with a flying wheel ended Conor Daly’s hopes of winning Sunday’s Indianapolis 500 after the Carpenter driver led more laps than any of his rivals.

Speaking as Helio Castroneves celebrated in victory lane, Daly pointed to his car’s damaged nose and said: “The only reason we weren’t there is because of that there.”

Graham Rahal’s car shed its left-rear wheel on lap 119 as he re-joined the track at turn two following a pit stop. It bounced into the path of Daly, who struck it at speed with the nose of his car.

Astonishingly, the impact with Rahal’s wayward tyre was minor enough that Daly could continue driving. He even overtook Jack Harvey at the restart and briefly climbed into the top 10 before ultimately dropping back to 13th.

“This giant tyre just flew out of the sky,” explained Daly. “I had no idea. About par for the course, for me – a flying tyre ruins our race.”

Had the wheel struck any other part of his car it would likely have meant instant retirement and possibly a serious crash. As it was, the damage left him with a significant handling imbalance.

“We just had to work with what we had, right?” Daly smiled. “The car started understeering quite a lot, pushing a lot. But I mean, it was nice to be up front!

“I think we proved that we could be up there, racing with those guys,” said Daly, whose 40 laps in the lead are the most for him in any single race in an IndyCar career that has spanned 70 events over eight seasons. “I mean, everything has to go perfect, and if you hit a flying tyre that you’ve never seen before until it’s right in front of your face – it’s tough!” he laughed.

Ed Carpenter Racing once again demonstrated great potential at the Indianapolis Motor Speedway but couldn’t capture the victory they’d worked towards all year. Daly’s team mate Rinus VeeKay, in his second Indy 500, started from the front row and led 32 of the first 49 laps but came away with an eighth place finish after Rahal’s accident compromised his strategy.

“I was leading the first stint, then I wanted to save some fuel behind Conor, so I was running second for a lot,” said VeeKay. “And then with the yellow (for Rahal’s accident) we just kind of fell short, and it didn’t go our way.”

“I was running 13th with a few laps to go, and then passed five cars – so nothing to complain about. Lady luck wasn’t on my side today, but there’s many more races this season, and many more 500s in my future coming up.”

Team owner Carpenter produced the team’s best result of the day having spent much of the race mired in the midfield after what he called a “rookie mistake” during his first pit stop.

“I stalled the car somehow – hadn’t done that in a while,” Carpenter explained. He recovered to finish in fifth place.

“I passed a couple of cars to get back up to fifth. The car was really good, it was just tough running deep in the pack. But it was great to be able to get back to the fight in the end. From how it looked early on, to come away with a top five – it isn’t a bad day at all.”