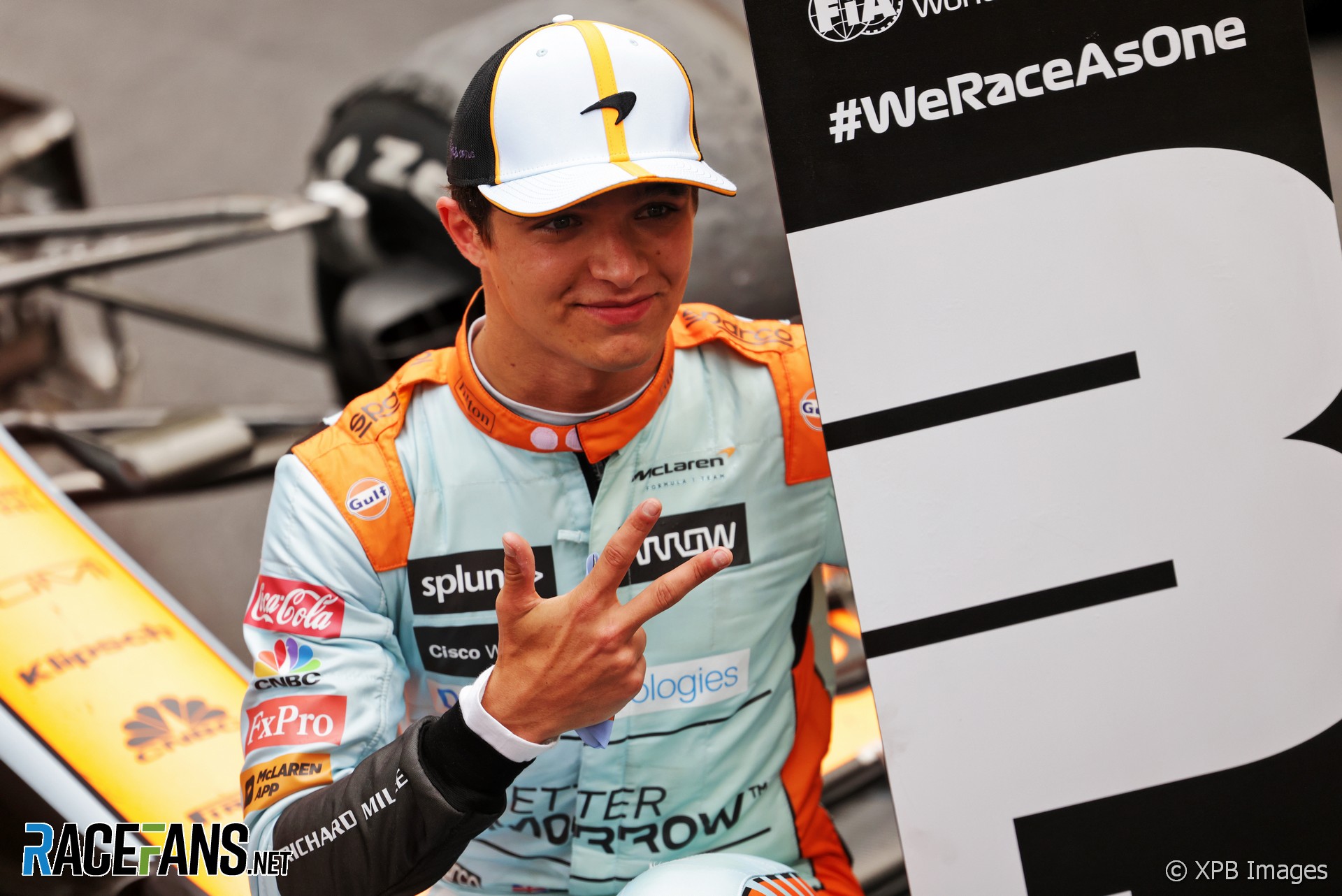 Lando Norris has come of age at the beginning of his third season of Formula 1.

The McLaren driver ended 2020 with an assured drive to fifth place at Yas Marina, leading the midfield home behind the untouchable Mercedes and Red Bulls. He has carried that form into the new season in fine style.

In Bahrain, Imola and Algarve, he ensured his MCL35M was the first midfield car home. And thanks to McLaren’s off-season gains, those top two teams are considerably closer than before; enough that Norris has often taken points off their cars.

As Carlos Sainz Jnr departed McLaren for Ferrari, and Daniel Ricciardo arrived in his place, Norris has been his team’s constant. What better time, then, to ink a new, multi-year deal?

Speaking to RaceFans and selected media in Monaco, where the team was resplendent in a one-off livery celebrating sponsor Gulf, Norris explained why he pledged his future to the team which brought him into Formula 1.

“It’s a combination of a few things over the last couple of years that we’ve that we’ve done,” says the 21-year old. “But then also things we have coming up in the future.”

The team which last took a driver to the world championship in 2008 is investing in a major upgrade of its facilities.

“Having our own wind tunnel is one of the biggest things,” Norris says. “How much easier it will make their lives in the factory, the guys and girls who have to travel all the way to Germany every time, and go to the wind tunnel. They have to spend isolation there for three weeks, then come back, isolation again, so the amount of time we lose a lot of time compared to other teams who are able to do it a lot quicker.”

That investment is just part of the changes McLaren Racing CEO Zak Brown and team principal Andreas Seidl have planned to bring the team back to the front. Like many of their rivals, the team has an eye fixed on new technical regulations which will arrive for the 2022 F1 season, and the opportunity they present to significantly close the gap to dominant reigning champions Mercedes, and challengers Red Bull.

“I think what we have now is still taking a couple of years to settle into place and come all together for the next few years,” says Norris.

“In 2022, everything changes. I think we’ve had these rules for a few years now where we were a long way behind with these rules. We caught up a lot with these rules. And the fact we managed to catch up as much as we have has been pretty good.

“But then in 2022 everything’s different. So I have the belief that we can start off on a much better foot, I would want to say, in the best way possible.

“You still know that Mercedes and Red Bull are going to be fast from the off next year. But if we can start much closer then we’ll still be able to progress from there on.”

Having started 2021 so strongly, Norris might have been forgiven for thinking he had a chance to attract the attention of one of the top teams. But he says he would be reluctant to leave the team that brought him into Formula 1 if such an opportunity arose.

“I owe a lot to the team for giving me the opportunity to be here and everything. Getting to do already the FP1s and in-season test that I did it back in 2017, I think a lot of that set me up very well to come into Formula 1 in a good way.

“They’re the reason I’m in Formula 1 now, so I owe them a lot, I have a lot of loyalty for them. And I think loyalty is one of the biggest things in terms of respect between us and the teams and stuff, so it wouldn’t be an easy decision for sure.”

Norris’ new deal is a career milestone – the moment he moves from being a relative newcomer in the sport to one who has proven he has earned his place in the top flight. He feels more assured of his place in F1.

“It’s still quite early, still year three,” says Norris. “But I feel much more like my own driver rather than just a driver who’s in Formula 1.

Not since Lewis Hamilton have McLaren brought a new driver into the sport who has impressed in the way Norris has. But he is characteristically modest about his chances of becoming the team’s next world champion.

“You never stop learning, you never stop getting better,” he reflects. “In many ways. I’m still early days, I would say.

“You have like Daniel or Lewis, who’s an incredible driver, but he still says now he makes mistakes and he still learns and he’s still getting better and so on. So I’ve got a long way to go until I’m at that stage.

“But me comparing to the driver I was a few years ago, I’m just a much more complete driver.”

From that has come the increasingly impressive performances which had already earned him his first podium finish of the year at the time of our interview. A second followed a few days later on Monaco’s streets. It’s hard to imagine there won’t be more to follow.