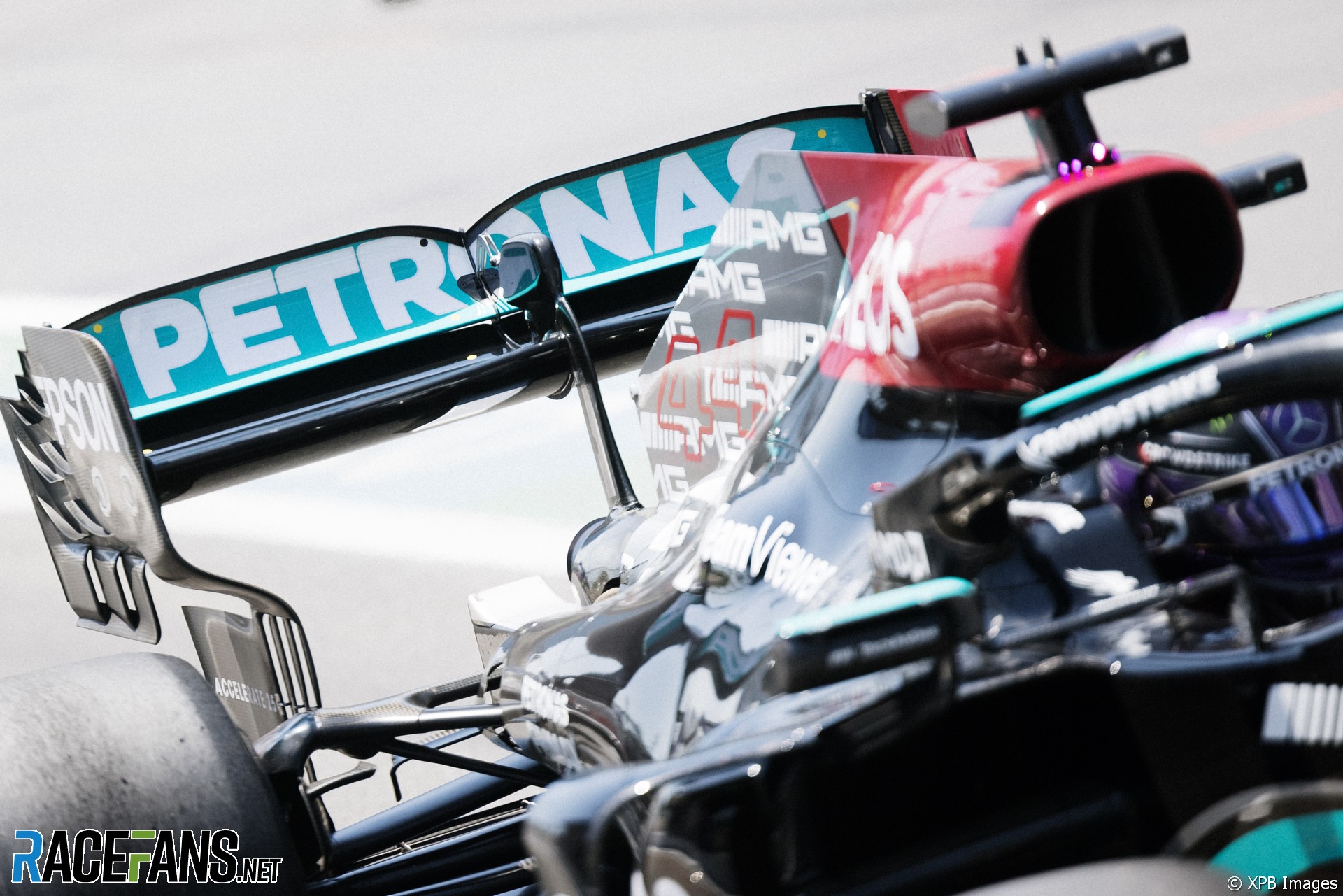 Mercedes had to try some “extreme things” with their set-up to unlock the performance from their W12 after the team struggled in practice.

Lewis Hamilton qualified second on the grid for the Azerbaijan Grand Prix, crucially ahead of championship leader Max Verstappen. The front-row start for Hamilton was a major turnaround in fortunes for Mercedes after a dismal first day of practice which saw both cars finish second practice outside the top 10.

Speaking after qualifying, Hamilton explained how the Mercedes mechanics had worked until 11pm on Friday looking for a way to resolve their lack of pace.

“Basically, when we arrived here, it didn’t feel too bad in FP1 and then obviously as we got through the rest of the sessions, FP2 and FP3, were pretty much a disaster,” explained Hamilton.

“We did some changes overnight, which didn’t rectify the issue going into today. Then in FP3, we tried a few different things and then we tried something right at the end just with the set-up, and it unlocked the potential a little bit.”

Hamilton said his team “were here last night until 11 o’clock” working on the car and continued tweaking it until 10 minutes before qualifying began. “Then just had to shake it off and go for it and just go all out.”

Mercedes CEO Toto Wolff said the team took risks with their cars’ set-ups which did not pay off as they searched for a solution to their poor performance.

“In FP3 we worked through some really thorough engineering programmes and we were not shy of trying extreme things,” he said. “Which, at the end, were extreme as we expected, and weren’t the silver bullet.

“But it was just really crunching through the numbers, trying things, getting the feedback of the drivers. And eventually we had the car in a more decent place. So it was the last run in FP3 where we tried to confirm the step and the car was there or thereabouts.”

One obvious approach Mercedes took was running different rear-wing specifications on their cars, as they also did at the Portuguese Grand Prix last month. On that occasion Hamilton ran a slimmer rear wing with a twin-pillar mount, while Valtteri Bottas used a steeper, single-pillar wing.

This weekend the two have reversed: Bottas has the twin-pillar wing with a shallower main element. On the face of it, Hamilton would appear to be at more of a disadvantage running a steeper wing, producing more drag, at a track where straight-line speed is critical.

However Hamilton went into the weekend knowing he would have the opportunity to take a tow from his team mate in qualifying. Mercedes rotate which of their drivers has first say in the qualifying running order – which is standard practice for many teams – and this week was Hamilton’s turn to have first call. The expectation he would benefit from his team mate’s slipstream may have given him the confidence to run a steeper rear wing.

Wolff said the difference between the drivers’ rear wing choices did not account for the gap between the pair in qualifying, where Hamilton was 1.2 seconds quicker, but indicated it could play a role in the race.

“I don’t think it was a big pace disparity today,” he said. “Tomorrow, it might have a slight effect.

“But the difference was that the car was very tricky all weekend and somehow Lewis found the confidence for qualifying and Valtteri struggled. I think, on a circuit like this one, that is important.”

Hamilton said the key factor in Mercedes’ turnaround had been working out how to get their tyre temperatures into the optimum levels more reliably.

“It was really just about getting the tyres to work,” he explains. “We just can’t get our tyres to switch on like the others generally can. And so the night-and-day difference feeling was that all of a sudden the tyres started working and we’re kind of back in the game. So it was just then about pulling the lap together.”

Having found more pace in their car over the course of Saturday’s running, Wolff believes that the team have a reason to feel confident about their potential for Sunday.

“We had a quick racing car yesterday,” Wolff said. “In the long runs, we had good tyre degradation and we have good straight line speed. So it should put us in a decent position for tomorrow.”