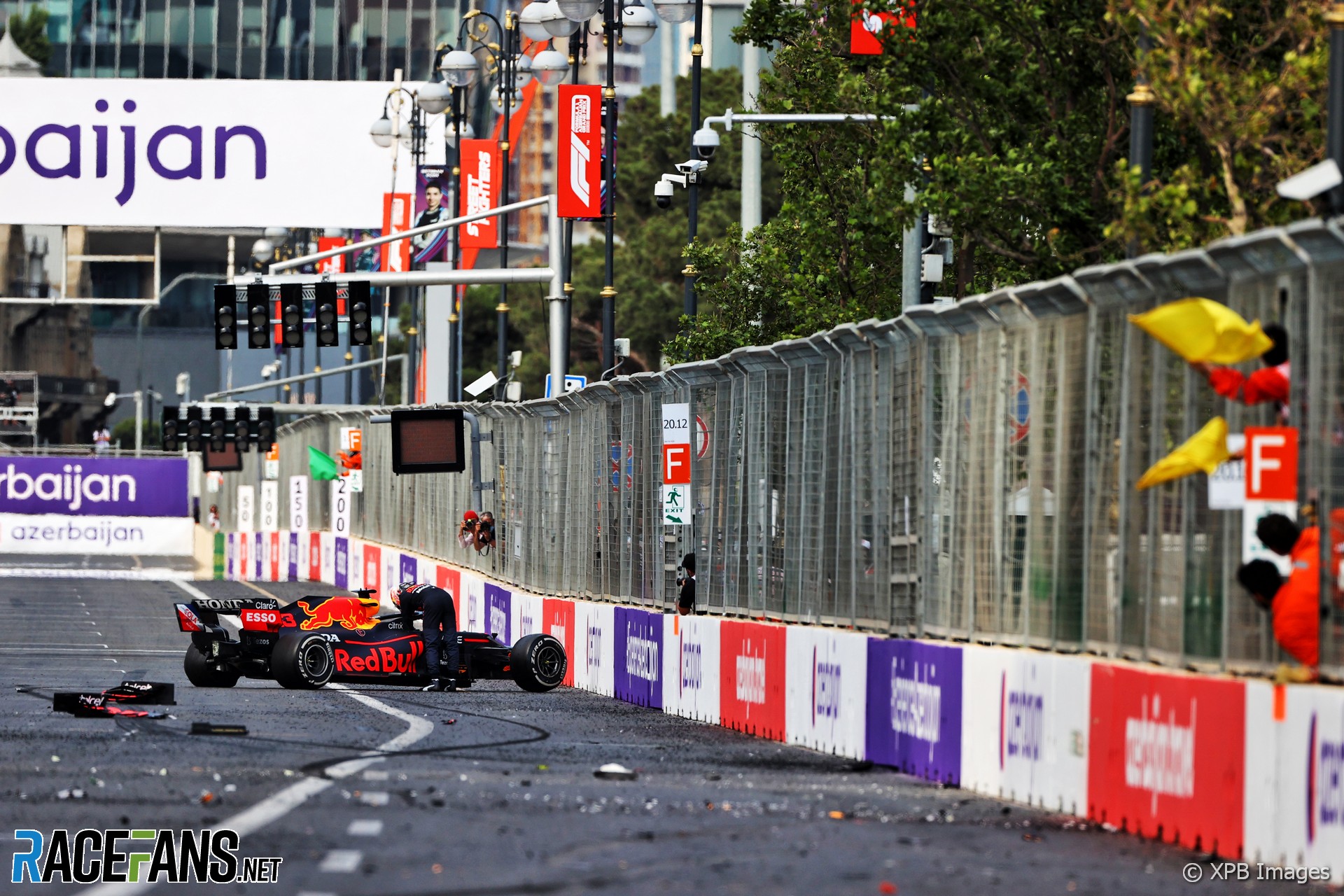 Max Verstappen said he had no indication he was about to suffer a tyre failure before the crash which cost him victory in the Azerbaijan Grand Prix.

The Red Bull driver was leading the race with five laps to go when he suffered an apparent left-rear tyre failure which sent his car into the wall on the pit straight, where speed exceed 300kph.

“I didn’t feel anything up until the moment that I suddenly went to the right,” explained Verstappen after he had been released from the Medical Centre at the Baku City Circuit. “The tyre just blew off the rim.”

He struck the barrier nose-first but was able to climb out of his RB16B unaided. “It’s not a nice impact to have,” he said. “It’s quite a dangerous place to have a tyre blow out at that speed. But all fine with me, the car not so much.”

Although Lewis Hamilton also failed to score, Verstappen rued the lost opportunity to close on his championship rival.

“Up until then I think we had a very strong race,” said Verstappen. “I was basically matching the lap times that I had to do behind. We were fully in control.

“Of course it’s very disappointing what happened. We lost out on a lot of points, we could have opened up the gap in the championship as well, so to have this happening, especially so close to the end, is very frustrating.”

His team mate Sergio Perez, who was running second at the time of Verstappen’s crash, went on to take victory. Red Bull team principal Christian Horner said it was a day of mixed feelings for the team after a failure which cost them their first one-two finish for five years.

Horner said Verstappen and race engineer Giampiero Labiase had the race under control when the failure struck without warning.

“We were staring down the barrels of our first one-two since 2016,” he told Sky. “Everything in control. GP had just checked in with Max, all okay. And then boom, the tyre went.

“At the moment we don’t know why, it looked like the wear was all in good shape so whether it’s debris or something as happened. But it’s a big place to have an accident. Thankfully he’s okay.”

“We were managing the tyres pretty well and you could see all the wear pins and all that was going well,” Horner added. “You can see it’s suddenly deflated. Whether it’s a bit of debris from the shunt earlier you just don’t know.

“So I think let’s get the tyre back, look at it fully. But obviously [we were] feeling at that point that the world’s just dropped from under us.”