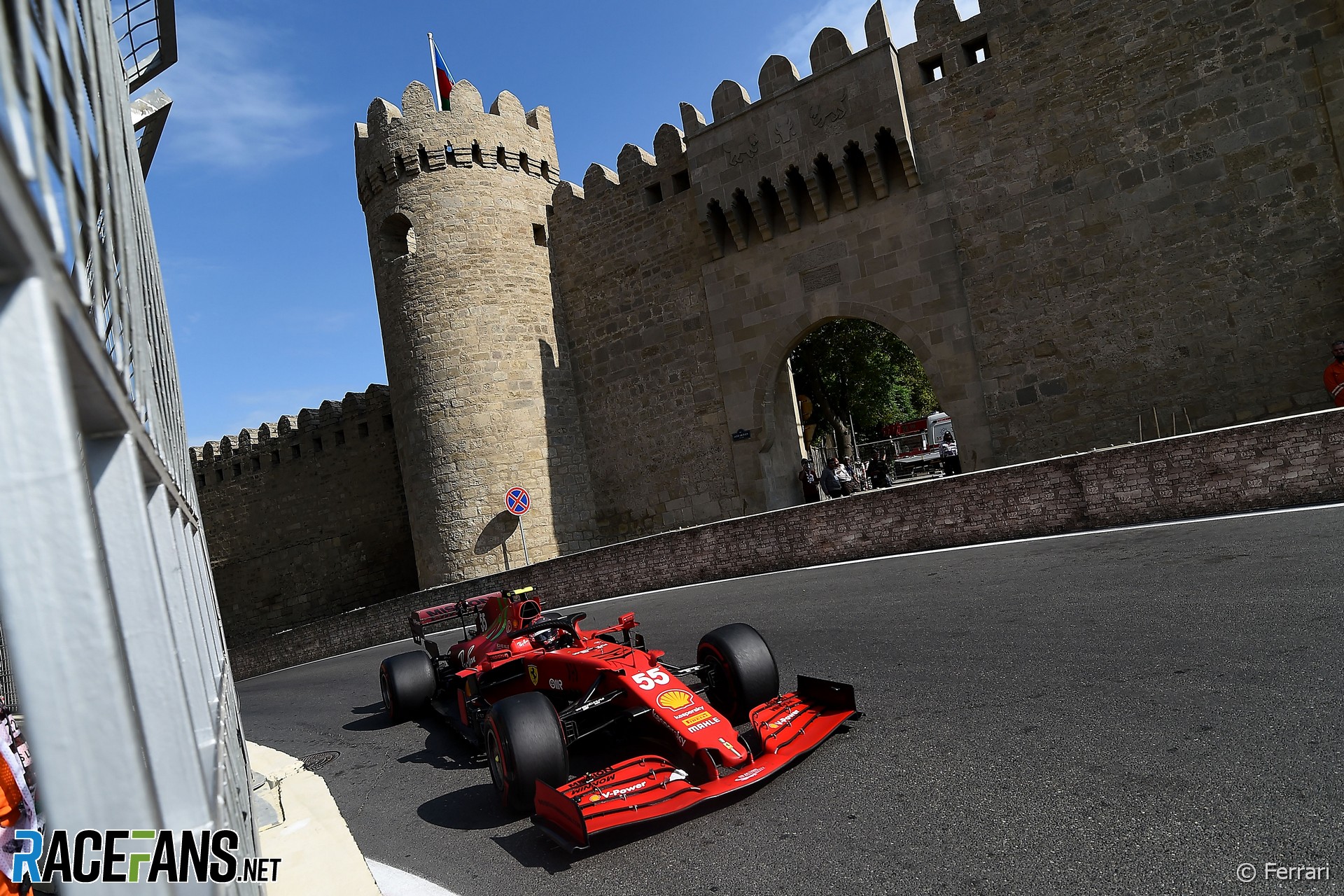 In the round-up: Carlos Sainz Jnr is determined to learn from a difficult Azerbaijan Grand Prix.

Carlos Sainz Jnr had a tricky weekend in Baku, including a Q3 crash and early visit to the run-off that severely compromised his race.

“It hasn’t been my my greatest of days, to be honest,” he admitted.

“Every time I had a cold tyre on the car – at the start or after a pit stop or in the last start or after a Safety Car – I was always struggling with with front locking, struggling with the feeling of the brakes, with the front tyre and today it has cost me. It has caused me a mistake, a couple of positions at some of the starts. And in the end it means that that the end result of the weekend is not as good as it should be.

“But it gives me an opportunity to focus on something, in trying to improve something, which is the feeling with the car and the front tyres and the brakes in those first laps when the tyre is cold and something that I will put some focus on to try and get better in the next few races.”

Esteban Ocon said his retirement from the Azerbaijan Grand Prix was due to a turbocharger failure.

“I can’t seem to catch a break here,” said the Alpine driver. “It’s very tricky, obviously, we had a boost pressure loss, so we had to retire the car and unfortunately it was not our weekend. That’s clear.”

Ocon had hoped to take advantage of a “messy” race to score point in Azerbaijan. “Qualifying didn’t go our way but we had the pace for the top 10. We did a good start, we were in front of both McLarens, I was fighting, I was doing my my race and it was going well. So it’s a shame.”

Easy to make a mistake in two-lap race – Norris

Lando Norris said he felt “fifty-fifty” about the Azerbaijan Grand Prix ending with a two-lap race from a standing start. He moved up two places at the final restart, partly thanks to Lewis Hamilton going off ahead of him.

“I’m sure Lewis was like, ‘I can get a win here’ and then went straight on,” said Norris. “So it’s so easy just to make a mistake and for it all to go so easily wrong.

“On the other hand, it can go right and you can gain two places. It’s always difficult to judge how aggressive you want to be, how many risks you want to take, but I thought I took a decent amount of risk versus reward ratio and it paid off.

“So I’m pleased with P5. Even with this weekend, with the penalty yesterday and starting P9 and the bad first lap and everything I was happy with that.”

Oscar Piastri finished second the Formula 2 feature race despite being penalised for an unsafe release from his pit box. He admitted the error was his fault.

“The team decides when I leave, but I was too excited to get out of the pit box and went while the light was still red,” he explained. “It was the first time where I’ve had that sort of situation, where I’ve had to wait for someone in the pit lane and I just wasn’t thinking about it.

“Normally the only reason the light wouldn’t turn green is if a wheel was still getting put on, but all four wheels were on and I was on the ground, so it was just a mistake on my part. Thankfully, it wasn’t worse, and thankfully there wasn’t a Safety Car so the penalty didn’t make much difference in the end.”

Helmut Marko confirms the Red Bull Ring considered whether it could run its track in reverse to hold its extra race this year, but had to shelve the plan, while noise concerns have made extending the circuit between turns one and three unfeasible.

"Starting from 11th after a poor Qualifying session on Friday, the Brazilian made up four places during a manic start, before gaining a further three throughout the race, narrowly missing out on a podium to Robert Shwartzman."

"Oliver Bearman won the final Italian Formula 4 race of the weekend at Misano as Van Amersfoort Racing team-mates Nikita Bedrin and Bence Valint came together in a dramatic collision."

After Nicholas Latifi’s penalty for doing what his team told him to do, Bleu points out that there has to be some leeway for drivers to follow race control’s instructions, especially at a high-speed track like Baku.

Remembering last year’s Italian Grand Prix where Hamilton and Giovinazzi were penalised for doing the opposite infraction. I remember a lot of debate where the pit being closed signal should be.

But it’s the same lights used in both cases (pit lane being closed or pit lane must be used) so they have to be early enough so every driver can react and not reverse the decision too late.
@bleu