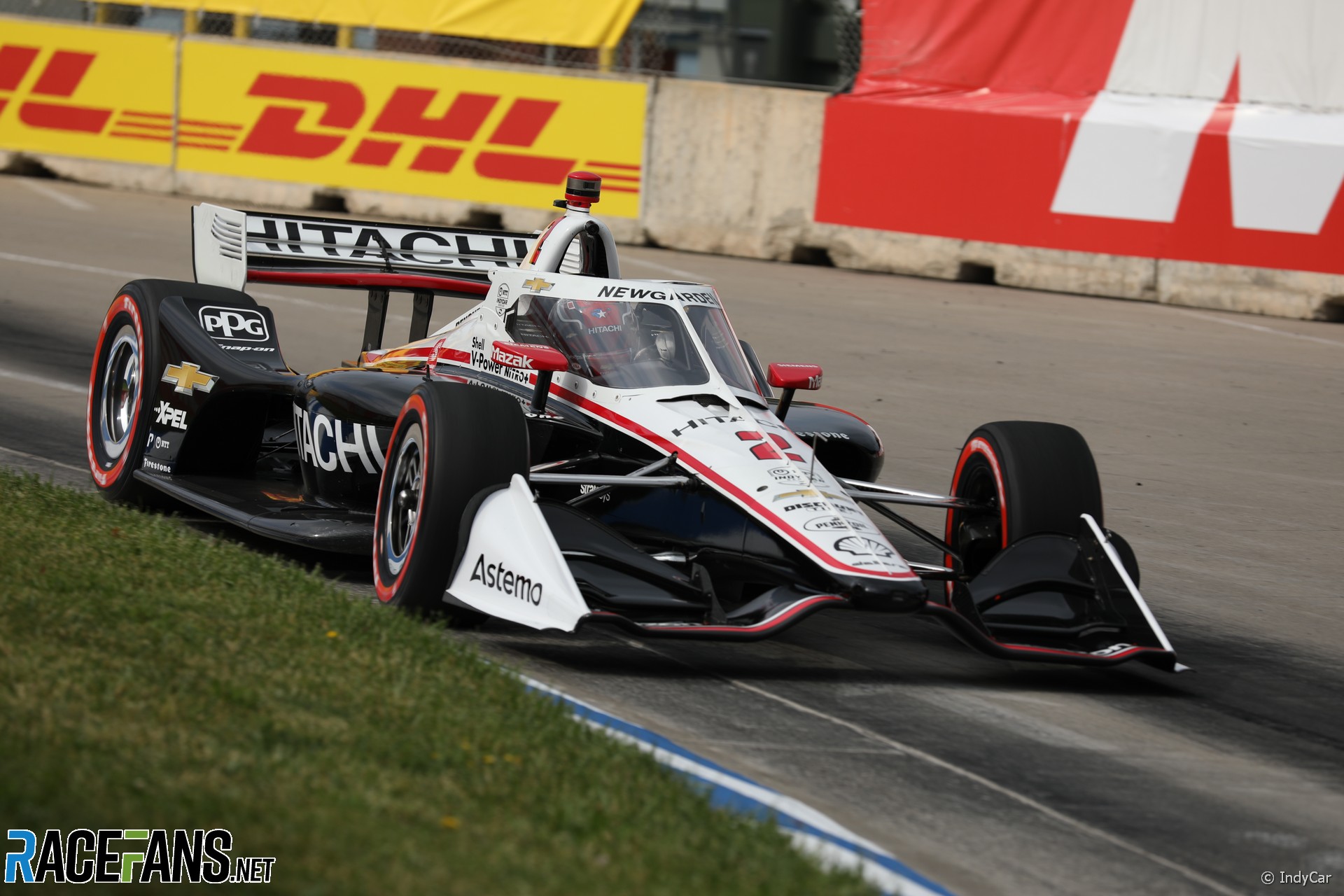 Josef Newgarden nearly led Sunday’s Detroit Grand Prix race two from start to finish. But as his tyres faded in the final laps, Patricio O’Ward found his way by to score his second weekend of the year.

The Penske driver said his difficult final stint was the legacy of a pit stop strategy compromised early in the race by the decision to cover a potential full-course yellow which never materialised.

“It felt like we had a good car and it just didn’t work our way strategy-wise,” said Newgarden after Sunday’s race. “I think it all just didn’t play into our favour.”

Newgarden led the first 67 laps of the 70-lap race, doing the first 46 laps over two stints on the black sidewall primary tyres. But at the end of the race, he had to run the final 24 laps on a used set of red sidewall alternate tyres, which was further than any driver except James Hinchcliffe ran on that compound.

His first pit stop came after Dalton Kellett’s car stopped at the exit of pit lane on lap 18. Fearing a caution may come out, Newgarden and a number of front-runners headed into the pits. That meant a longer stint on softer tyres later in the race.

“Probably the worst part was we had to put about 10 extra laps on those [alternate] tyres because we thought the caution was going to come out in that first stint around lap 18,” Newgarden explained. “You just can’t risk missing the caution. If you miss the caution, you’re just hosed. It completely ruins your day.”

While Newgarden started the race on primary tyres, his closest challengers at the time were all on alternate tyres when they came in for that first pit stop.

“I think that compromised us more than anything. That we had to run 25 laps on used reds so that was not ideal,” said Newgarden.”

A charging O’Ward emerged from the chasing pack, taking second place from Colton Herta before passing Newgarden to take victory. “The cautions bunching us up probably hurt us as well,” said Newgarden. “Just brought the whole field back to it.

“I think we probably could have held Colton off, potentially – if we just would have run cleanly to the end there. But that’s kind of impossible to say.”

Newgarden said it was only a matter of time before O’Ward passed him, once the McLaren SP driver forced his way into second place and closed in.

“He was coming like a freight train,” Newgarden said. “My tyres were cooked, and he was having great drives off the corner. I think that’s what kind of did us in. It almost did us in with Álex [Palou], too. Thankfully we were able to hold on to second.”

The performance of the alternate compound tyres during both races in Detroit was a major factor over the weekend. However, Newgarden believes the balance of the compounds was much better than when the series last visited the Belle Isle circuit two years ago.

“But I think the fact that they (the red tyres) are more fragile than the blacks makes it interesting to watch. I think as a spectator it’s probably more fun to see that mix-up and that dynamic, than them being just both really durable and just a little time offset. That’s what you get here. You get quite a bit of spread. But a lot less spread than what it was in ’19.”

After his third runner-up finish of the 2021 season, Josef Newgarden is fourth in the IndyCar standings, 51 points behind championship leader O’Ward.