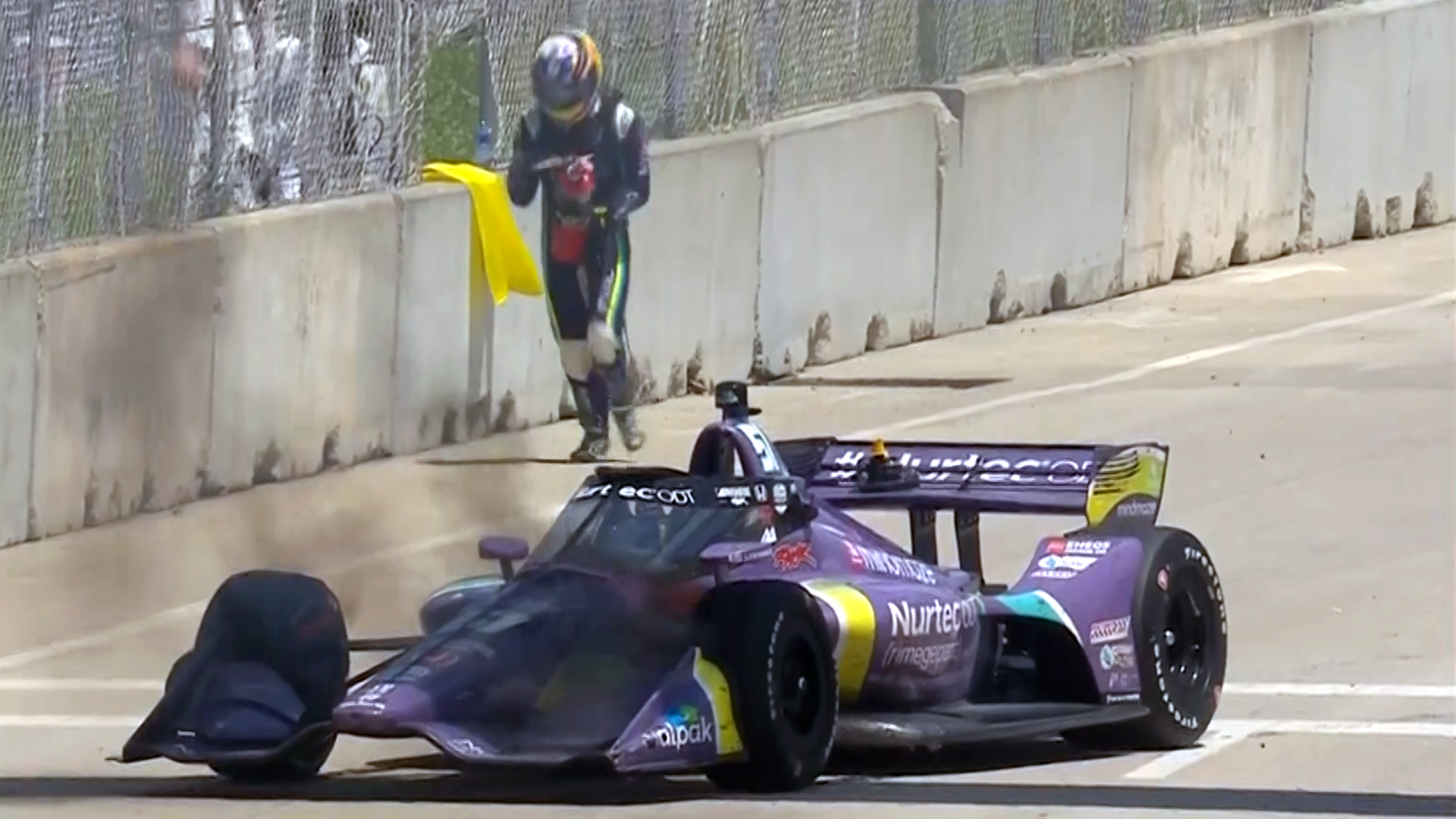 Six months on from his horror crash in the Bahrain Grand Prix which ended his Formula 1 career Romain Grosjean took matters in his own hands to tackle another, much smaller fire.

The Coyne/Rick Ware driver’s two races at the IndyCar Detroit Grand Prix followed a similar and frustrating pattern: Qualifying well in the morning, showing the speed of a contender while minor collisions put him outside the top 10, followed by an eye-catching retirement.

On Saturday, he crashed on his own, leading to a pivotal red flag. On Sunday, he spun due to a brake failure, and his front discs caught fire shortly after. Fearing for his car, Grosjean grabbed a fire extinguisher to douse the flames himself, though the safety team arrived on the scene before he could use it, and pulled him away from his smouldering machine.

It ended a weekend of clear potential for better results. But a number of setbacks – including some of his own making – Grosjean left the double-header without taking the chequered flag on his first visit to the Belle Isle street circuit.

“It was a pretty eventful weekend in Detroit,” Grosjean said. “I think we had two mega qualifying results with a third yesterday and fifth today.”

On Saturday Grosjean ran in the top 10 but found his car a handful early on. “We struggled a bit more with the balance. But we were hanging in there at the restart following the red flag and we were looking good.”

“I made an attacking move on Simon Pagenaud but sadly we touched, and it caused a puncture.” That dropped Grosjean to 21st. “After that, I was running at the back and I was trying to find some pace, but I was a bit optimistic, and I ended up in the wall.”

Sunday’s race kicked off with Grosjean in the thick of battle just one corner into the race. An early lunge from Alexander Rossi pinned Grosjean between Rossi and Scott Dixon, who all made minor contact.

While racing Jack Harvey after both drivers made their second pit stops, Grosjean punted Harvey into a half-spin during an attempted overtaking move, earning himself a drive-through penalty for avoidable contact for Grosjean. This buried Grosjean down in 18th place for most of the race, where he remained until he retired with his brakes ablaze.

“I got sandwiched at the race start and I lost a fair bit of positions,” Grosjean explained. “Then we tried to come into the race, but I picked up a drive-through penalty and we tried to come back from there.

“Eventually we had a brake fire, and I had to extinguish a fire, but we’re all good here,” he added with a wry smile.

“I think the positive of the day is that we improved the car a lot from yesterday and we can now look forward to Road America.”

Grosjean’s number 51 Dale Coyne Racing with Rick Ware Racing entry is currently 16th in the IndyCar entrant championship standings, which includes Grosjean’s results, as well as the results from former Haas F1 colleague Pietro Fittipaldi at Texas and the Indianapolis 500. The top 22 full-time entrants in the championship at the end of the season will earn a $1 million USD bonus at the end of the season as part of the IndyCar Leaders’ Circle programme.