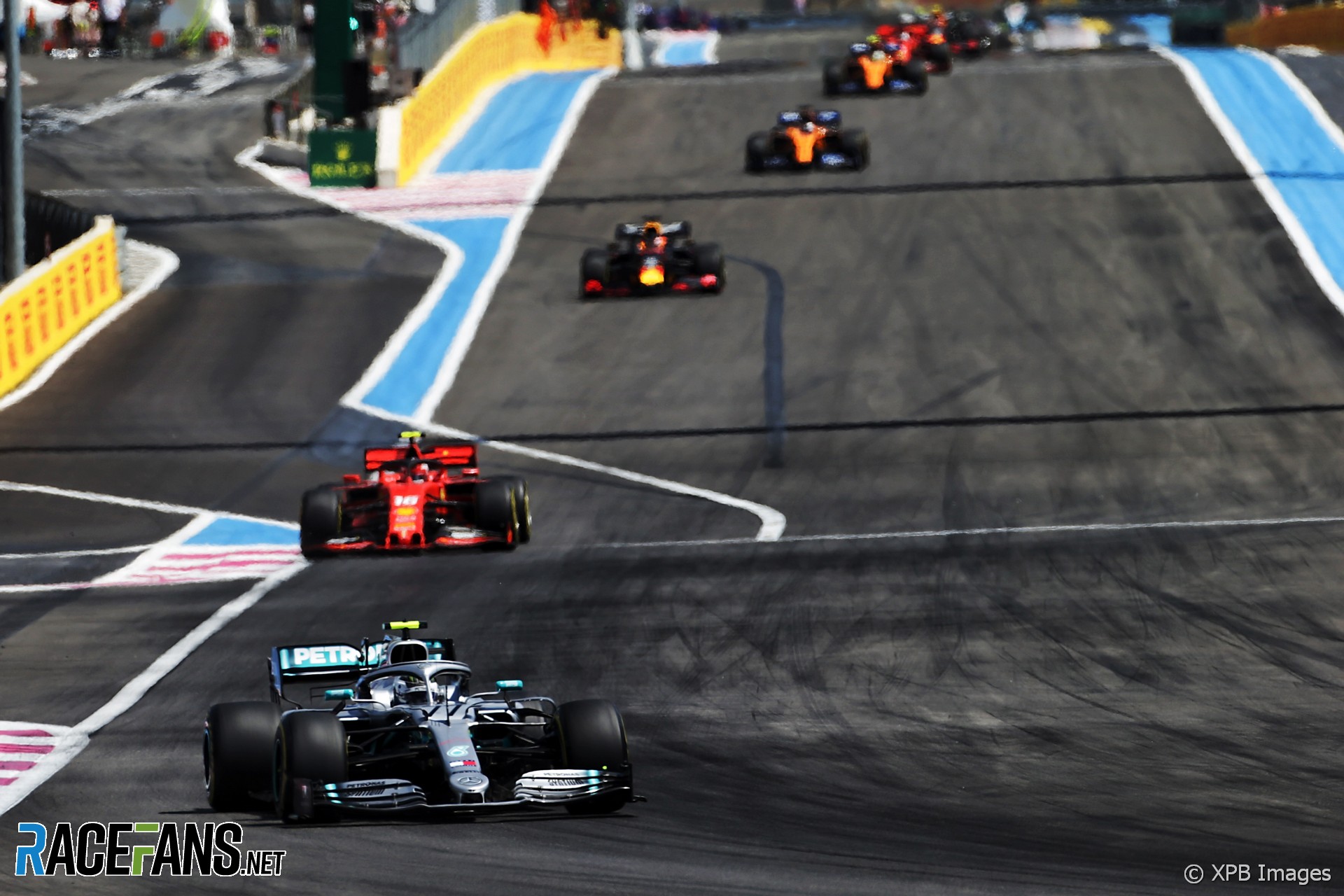 Changes to the track surface at Paul Ricard may aid overtaking at a circuit where Formula 1 cars find it difficult to pass.

But an 11th-hour date change for the French Grand Prix means one of the show’s stars won’t be there: Romain Grosjean’s planned public run in a Mercedes Formula 1 car won’t go ahead as he’s racing in the USA, though his private run will happen at the track later this year.

Will new asphalt change the racing?

A total of 73 overtakes in the 106 laps raced since it returned to the F1 calendar in 2018 may not sound too bad for Paul Ricard, but the French circuit quickly built a reputation for boring grand prix racing that it decided it needed to shake off for 2021.

During the period where it was holding no racing last year, it called on Studio Dromo – who renovated Silverstone and Zandvoort – to get to work on the circuit. Over 70% of the 5.8-kilometre track was worked on to “the maximum” with changed cambers and crests not only improving drainage but also posing more of a challenge to drivers and therefore hopefully leading to more battling on track.

However the resurfacing of the track also means it’s going to be smoother than the last two times F1 raced there, and a more consistent asphalt without bumps tends to lead to fewer mistakes and therefore less overtaking. And then if those who are at the front in qualifying also lead the way on race pace, as it was the last two times, then the action may all come down to who pits when.

Mercedes back on a normal track, and back on form?

Two fairly anomalous performances by Mercedes have coincided with the paddock heading to two rather anomalous tracks in Monaco and Baku, and it would be expected that returning to a more conventional circuit in Paul Ricard will lead to a return to form.

Lewis Hamilton won the French GP in 2018 and 2019, and in the latter year nobody could get near Mercedes’ pace in qualifying. Hamilton took his second victory at the circuit by 18 seconds and Ferrari was the only team that had neither of its drivers lapped by the winner.

High winds down the Mistral straight could punish low-rake cars such as Mercedes’ as they change direction, but nearly three months of development has now made the W12 more stable, if not faster. The circuit has a mix of high and low-speed corners of the sort F1 cars are designed for and developed on, and Mercedes’ form at the first races showed it has the car to beat on conventional layouts.

However it’s not just been the lap times that have held Mercedes back recently, with repeated pit stop bungles and strategy decisions in qualifying and the races that have worked out to their disadvantage. So changing scenery may make no difference at all.

Fernando Alonso’s F1 return does currently have him ahead of Alpine team mate Esteban Ocon in the championship standings, but it’s Ocon who has scored on more occasions and outqualified Alonso four times already.

He sees Paul Ricard as the start of “a new championship” for him in his return, due to the unfamiliarity of much of the first six rounds.

“In a way the start of the season is not the best possible calendar for a new-coming driver,” he said.

“I had Imola, I had Portimao, two circuits that I was not racing for years, or never like in Portimao. And the guys, they were racing four months ago in last year’s championship. And then two street circuits: Baku and Monaco.

“So the first six races of the championship, four they were extremely challenging to get used to. So from France, a new championship hopefully, just for me. On the experience side, I hope we can get something that I feel a little bit better the balance of the car, and more feedback than what I feel now.”

Paul Ricard kicked off F1’s first ever attempt at running races for three weekends in a row back in 2018, and the logistical nightmare of that was overshadowed by fans’ logistical nightmares as there were queues lasting hours that resulted in some fans abandoning hopes of seeing F1 cars and others abandoning their vehicles and trekking to the circuit.

Teams were getting back to hotels from the circuit after midnight on qualifying and race day, so a long start to what was going to be a long few weeks was not appreciated at all. After making their final escape on Sunday night, many then headed over 1,100 kilometres north-east to the Red Bull Ring deep in the Styrian Alps. Following that weekend, another 1,650km on the road for those who were going straight to Silverstone and even more for the Italian teams making a detour to their factories.

It was dubbed a race between races, described in gruelling detail here, and was an experiment not repeated for 2019. However the pandemic-hit 2020 season had to make use of compressing the schedule, with back-to-back-to-back runs being the format for the first nine rounds of the year although there was at least far less travelling than even a spaced out F1 schedule would have.

Liberty Media’s decision to expand the F1 calendar to a record number of grands prix this year means more triple-headers though, with Paul Ricard once again being the starting point. It will take a toll on F1 personnel, and harder worked people are more likely to make mistakes. But can anyone afford to take it a little bit easy or drive more carefully to preserve energy and parts for the weeks ahead? Not really in F1.

The return of track limits

Track limits dominated the discourse in press conferences through the opening few races of the season, rivalling the Mercedes versus Red Bull battle up front and the struggles of drivers changing teams further down the grid, but once the paddock headed to street circuits it practically became a non-issue.

And now they’re off to the circuit perhaps more renowned for track limits violations than any other.

Daniel Ricciardo was dropped from seventh to 11th in the 2019 French GP following two track limits related penalties applied post-race, with the extensive run-off all around the track jokingly said by some to be more attractive than the racing going on.

The smoother, grippier surface of the circuit this year should mean less wild moments of drivers losing grip – even with the downforce-sapping 2021 rule changes – but if the speeds are higher in the corners than they were two years then teams will definitely be pushing the limits of the track and going beyond them. It’s a scenario Pirelli are hoping won’t happen, and that was even before Baku.

The two high-speed tyre failures which occured during the last race at Azerbaijan raised many uncomfortable questions for Formula 1. Chief among which were, when so many changes were made to the cars and tyres in the off-season to prevent a repeat of last year’s failures, why are they still happening?

F1’s official tyre supplier Pirelli is due to present its findings ahead of this weekend’s race. A curious detail of the latest failures is that they occured at a track which is not particularly punishing on tyres. Paul Ricard is a more demanding layout, and Pirelli has brought three compounds from the middle of its range – the C2, C3 and C4 – for this weekend’s race.

If you’re heading to France for this weekend’s race, we want to hear from you: