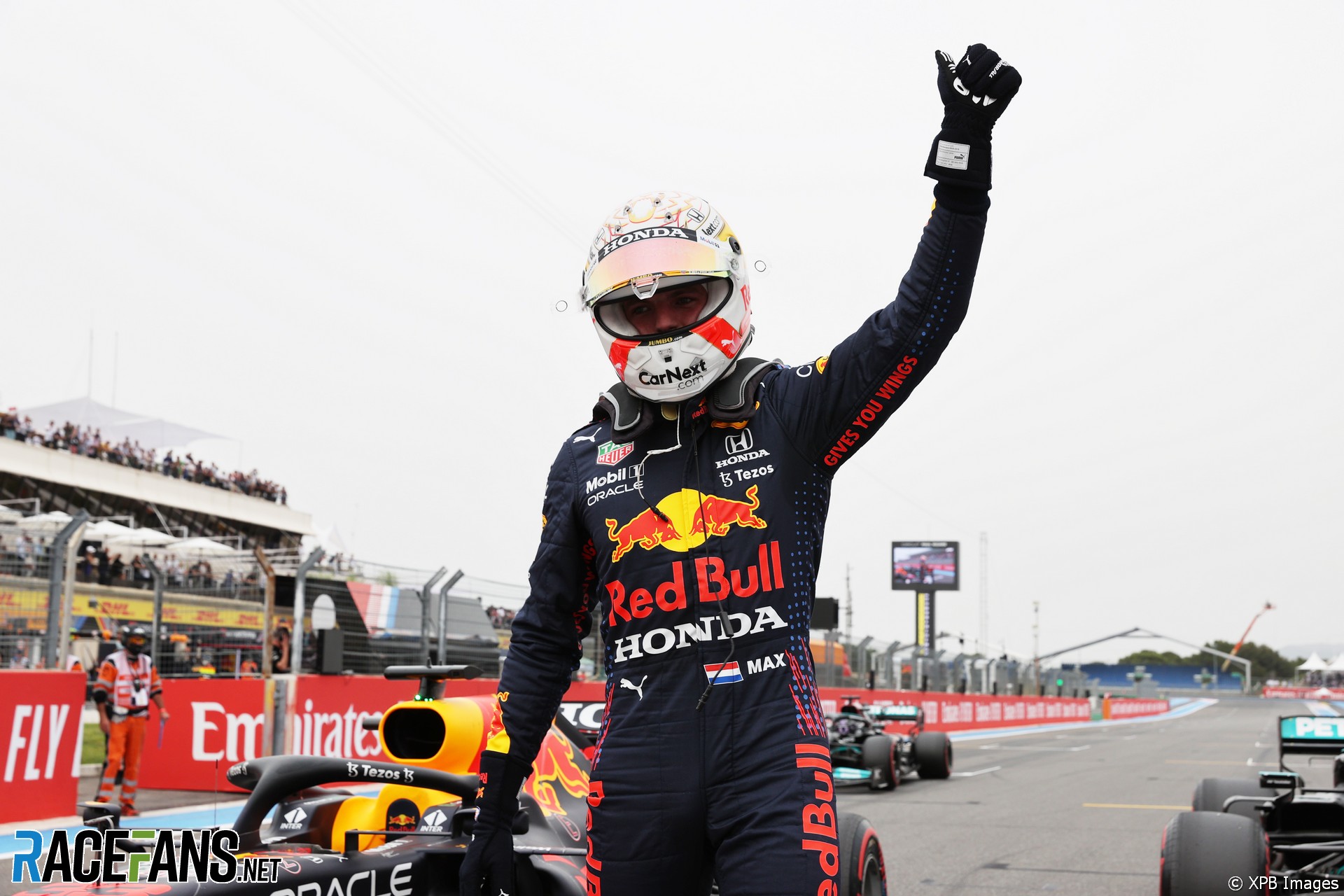 Max Verstappen will start from pole for the first time since the season-opening race in Bahrain after beating championship rival Lewis Hamilton by over two tenths of a second in France.

Verstappen secured his second pole of the season at the Paul Ricard by improving on his final lap of the day to become the only driver to break the 1’30 barrier.

Hamilton will line up alongside his rival on the front row of the grid, ahead of Valtteri Bottas and Sergio Perez.

Conditions were cool and cloudy as qualifying for the French Grand Prix get underway. But before any drivers were able to complete their first timed laps of the afternoon, the red flags were brought out after Yuki Tsunoda spun in the middle of turn one and slowly backed his AlphaTauri into the barriers.

While the impact was light and the damage minimal, Tsunoda was unable to get his car into gear and was forced out of the session without setting a lap for the second time of his young F1 career.

When the session eventually restarted, Verstappen and Red Bull set the early benchmark, six tenths of a second ahead of the two Mercedes of Bottas and Hamilton.

Hamilton improved to within a quarter of a second of Verstappen on his second attempt, before being informed that the time loss to his championship rival was “mostly straight line speed”.

In the closing minutes, Lance Stroll was in danger of being eliminated after having his one and only flying lap deleted for exceeding track limits. The Aston Martin driver then abandoned his first lap on his final run, leaving him with just one lap available to secure himself a place in Q2.

However, Stroll’s effort was scuppered when Mick Schumacher spun his Haas exiting turn six and skidded into the barrier, breaking his front-left suspension.

The session was stopped with no time remaining to restart the session – dooming Stroll to a 19th place start.

In an ironic twist, Schumacher’s accident secured his progression into Q2 for the first time in the season in 14th place – albeit he would take no further part in the session.

Also eliminated were Kimi Raikkonen in 17th, with Nikita Mazepin the slowest of drivers who successfully set a legitimate laptime in 18th place.

With tyre choice for the race a crucial factor heading into the second session of qualifying, it was no surprise to see all the front runners venture out on the medium tyres as Q2 began.

After the first runs, Red Bull were comfortably quickest with Sergio Perez sitting atop the times ahead of Verstappen and the Ferrari of Carlos Sainz Jnr, with the Mercedes of Bottas and Hamilton only able to manage the fifth and seventh fastest times, respectively.

Hamilton immediately opted for a second run on the medium tyres, improving to break the 1’31 barrier for the first time and go quickest of all.

With time counting down, Charles Leclerc was under threat of a surprising early elimination from the session, but was able to improve when it mattered most to get through in ninth place.

Lando Norris was told to abandon his final attempt for McLaren, while team mate Daniel Ricciardo was sent back out on soft tyres to try and secure his passage into Q3, and successfully managed to qualify for the final shootout in tenth place.

That left Esteban Ocon as the surprise first driver to be eliminated from the session, unable to do better than 11th. Sebastian Vettel also found himself out of qualifying in 12th place to compounding a frustrating qualifying for Aston Martin after showing promise earlier in the day.

Antonio Giovinazzi was the next driver to be eliminated in 13th, ahead of Russell’s Williams. After having crashed out at the end of Q3, Mick Schumacher will provisionally line up 15th as he was unable to set a time in the session.

The final shoot-out for pole position for the French Grand Prix looked to be another head-to-head between Red Bull and Mercedes.

Pierre Gasly was the first driver to set a lap time, but he had his time deleted for exceeding track limits on the exit of turn six.

The two Red Bulls of Verstappen and Perez occupied the top two places after their first attempts ahead of Bottas’s Mercedes, until Hamilton split the Red Bull pair by going second, three tenths slower than Verstappen’s best.

In the dying moments of qualifying, Gasly improved to go ahead of Bottas, as Sainz moved up to a provisional third place.

Verstappen’s second effort was even more superior than his first, just sneaking under the 1’30 mark to go seven tenths clear of Hamilton.

Bottas improved on his final effort to jump to second place, with Perez moving to third fastest. That meant only Hamilton could challenge Verstappen for pole and while he lowered his quickest time, it was still not enough to usurp the championship leader, with Verstappen taking his second pole of the season.

Hamilton will start second ahead of team mate Bottas with Perez starting fourth in the second Red Bull. Carlos Sainz Jnr will line up fifth, ahead of Gasly and Leclerc.