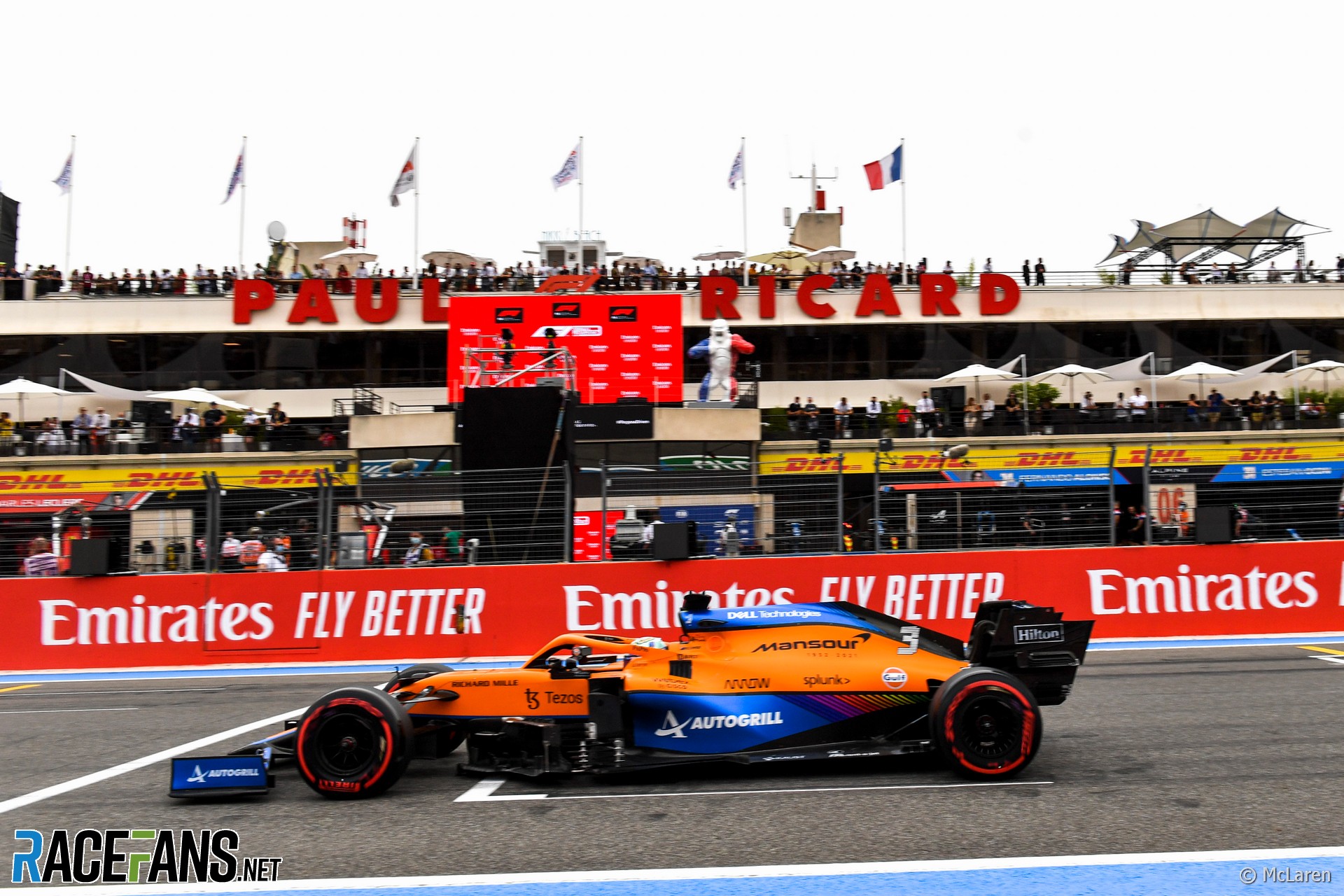 In the round-up: McLaren team principal Andreas Seidl says Daniel Ricciardo has made progress after he returned to Q3 at Paul Ricard.

Seidl: McLaren glad to have both cars in Q3

Seidl drew positives from McLaren’s performance in qualifying for the French Grand Prix, as both drivers reached Q3.

“We saw the picture throughout the qualifying sessions that we have seen all weekend,” said Seidl. “So it wasn’t a surprise. [On the] positive side, it’s obviously good to have both cars again in quali three.

“It’s good to see also that Daniel made definitely a good step forward. [He] feels a lot more comfortable in the car, which allowed him again to go into quali three after the last two weekends, which were challenging for him.

Seidl added he is “optimistic we can fight for good points” in the race.

Following the extended furore around Red Bull’s “flexi-wing,” the team have been forced to change their set-up for the French Grand Prix.

Now running a much more slimline wing, Perez said he believed it would provide an edge over Mercedes on Paul Ricard’s straights.

“I think that’s an advantage for tomorrow, come race day,” Perez said. “We have good straight-line speed and we are able to go through the corners and still look after the tyres.”

Schumacher: Haas “hopefully in the ballpark” for a fight

Mick Schumacher and Haas reached Q2 for the first time this season at the French Grand Prix. However it came in part due to the session being red-flagged after the Formula 2 champion crashed.

Looking forward to the race, Schumacher believes there is a chance for the Haas drivers to race rival teams for a change.

“The long run pace actually felt pretty good, so I’m looking forward to try and seeing where we’re going to end up,” he said. “Obviously, we saw in past appearances that Williams seemed to be very quick in qualifying and in race pace sometimes they’re a bit closer to us or we’re closer to them, however you want to see it. So hopefully we will be in the ballpark of being able to fight someone tomorrow.”

Arthur Leclerc took his first Formula 3 victory in Saturday’s second race in a lights-to-flag, confident fashion. However, he had had to recover 18 places, from 30th to 12th in the first race of the day, in order to take reverse grid pole after a mechanical failure had ruled him out of

“In the beginning this morning I went with my mind, I said I have to maximise all the opportunities that I get and focus on my job. We knew we had the pace straight away from free practice, but in qualifying I was a bit unfortunate. It was a really good recovery this morning, to be honest I didn’t expect to come back from so far back on the grid and we made it to P1 this afternoon.

Unfortunately both #Porsche99XElectric will be disqualified due to technical infringements.

Josef Newgarden denied Colton Herta late on to take pole position at Road America ahead of the ninth round of the #IndyCar season tomorrow. pic.twitter.com/yoEbtKjAbx

"Smolyar: 'The race changed so much compared to the first one. There was more wind, and I was expecting it to be easier to overtake with the DRS, but it was harder to overtake.'"

"Louis Foster prevailed in a chaotic opening race of the weekend at Spa-Francorchamps for Euroformula. The Briton started from pole and fended off an attack from Cameron Das and Joshua Mason down the Kemmel Straight on the opening lap"

Red Bull are finally delivering on the potential they had throughout the hybrid era, says @Kingshark:

Red Bull have been stuck with a hugely inferior power unit to Mercedes for the last eight years. 2021 is the first time in the hybrid era where they don’t have much of a power deficit, and they are immediately championship contenders again.

Looks like Red Bull never really forgot how to build aerodynamics, it’s just that their wings have been clipped for most of the hybrid era.
@Kingshark

4 comments on “McLaren encouraged by “good step forward” from Ricciardo”