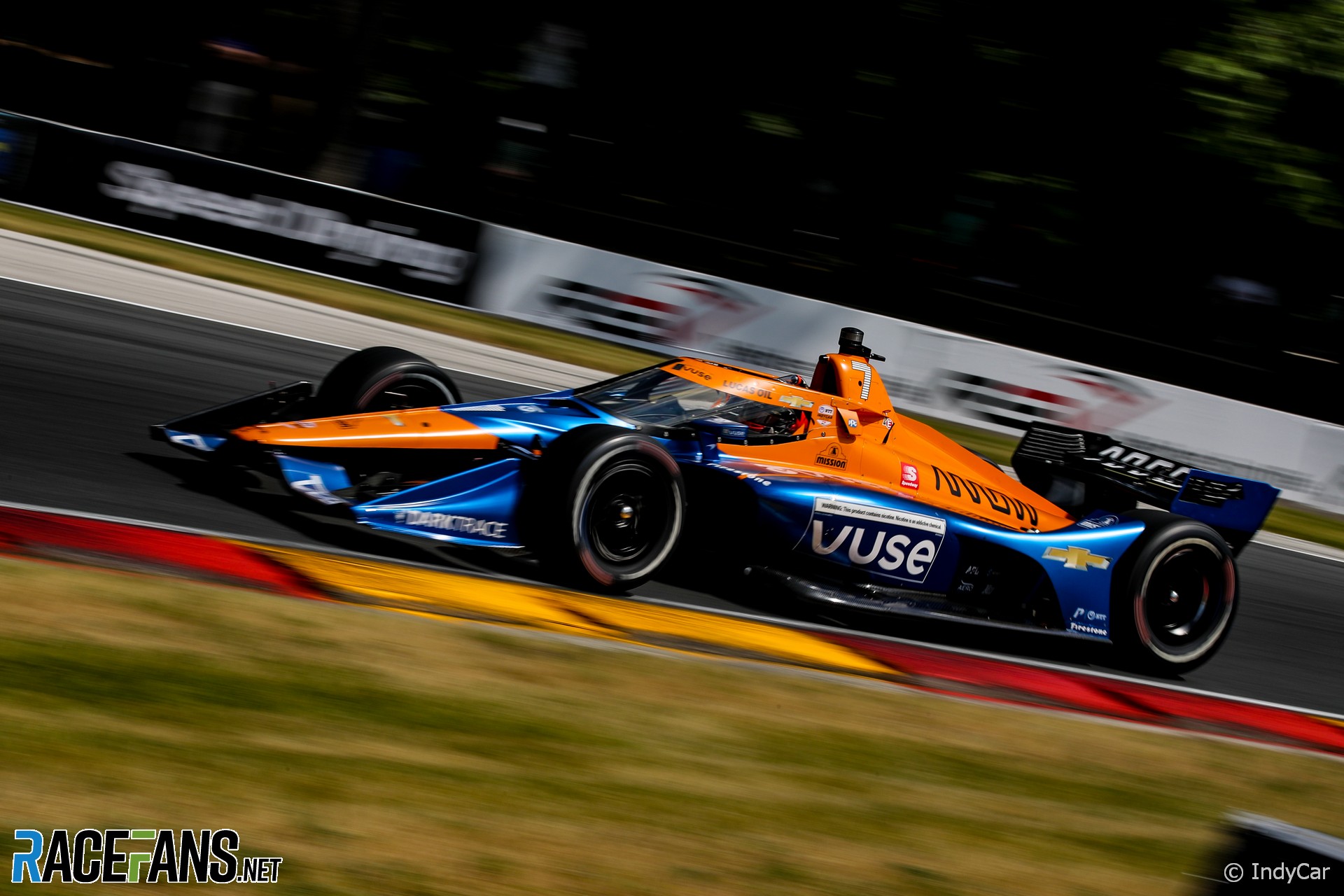 On Friday morning, Kevin Magnussen was introduced to the IndyCar Series paddock and media for the first time, knowing that he was, in his own words, “the very least prepared I’ve ever been to step into a race.”

Less than 48 hours earlier Magnussen was tapped to drive for McLaren SP, taking over their orange and blue number 7 Dallara/Chevrolet in place of the injured Felix Rosenqvist. He hadn’t tested an IndyCar prior to the start of the weekend, and wasn’t acclimated to the physicality of driving a Dallara IR18 with no power steering. He had driven the 6.5-kilometre Road America circuit – though in testing, not competition – and found a track which reminded him of classic European circuits like Spa-Francorchamps.

“I’m as prepared as I can be with the limits of time, but it will be a steep learning curve for sure when I get in the car for the first time this afternoon,” said Magnussen. Even with a team mate like championship leader Patricio O’Ward supporting him, Magnussen faced a very steep learning curve over the course of the weekend.”

Among the useful sources of information Magnussen tapped ahead of his debut was Romain Grosjean, his Haas Formula 1 team mate of the previous four seasons, who’s successfully made a new home at IndyCar.

“After leaving Formula 1 it’s like a whole new world of opportunity has opened up,” Magnussen said of his surprise IndyCar chance. “It feels very good to be able to look at all sorts of different things and just go and have fun with what I’m doing.”

“I’m a racing driver and a very passionate one. I love driving race cars, and I love competing. Being able to do all these different things and experience all these different cars and tracks around the world is really a privilege, and this weekend is going to be another big privilege.”

From Friday afternoon’s first practice, to second practice on Saturday morning, Magnussen improved his best lap time by 3.5 seconds. But he finished second-to-last in his qualifying group, only four-tenths quicker than Jimmie Johnson. This left Magnussen, a veteran of 120 Formula 1 grands prix with McLaren, Renault, and Haas, starting 21st on his IndyCar debut.

Perhaps some observers expected more from a recent Formula 1 castaway in the prime of his career, just a week on from his first win in the IMSA SportsCar Championship on the streets of Detroit. But being one second off making the cut for the second stage of qualifying after just 31 laps in an unfamiliar car is not to be sniffed at.

He didn’t make much forward progress at the start of the race, and had a wild off-track excursion through the grass at turn 13 after six laps. This dropped him down to 20th, behind Takuma Sato in a damaged car. Magnussen made his first pit stop on lap 14, then came in again on lap 17 during the first full-course caution following Johnson’s spin at turn eight.

With a fresh set of alternate compound tyres, Magnussen went from 22nd to 18th by the time the second caution came out, this time for Marcus Ericsson’s spin at turn three. Since Magnussen had pitted under the last Safety Car period, Billy Vincent, the competition director of McLaren SP – and strategist for their number 7 Dallara/Chevrolet – saw an opportunity to get his driver to the front of the field. Vincent made the call for Magnussen to stay on track, while every other car in front of him rushed to pit lane to refuel and change tyres.

When the race restarted from lap 25, it was Kevin Magnussen leading the field to the green flag, his first time at the front in a single-seater race since winning the 2013 Formula Renault 3.5 title. And with the lapped car of Sebastien Bourdais as a buffer between himself and second-placed Takuma Sato (who also ran the same strategy), Magnussen was able to string together consistent laps in clean air, on a fresh set of the softer, alternate compound tyres.

Sato was eventually able to work his way past Bourdais, then lunged past Magnussen going into turn five on lap 31 – just before Magnussen went to the pits for his third pit stop.

Magnussen would have been able to make it to the end on one more pit stop, had he been able to reach the chequered flag. But on lap 33, his car lost drive out of turn seven, and his debut IndyCar race was over, classified 24th out of 25 starters. A unflattering result to cap off a very difficult weekend, yet one which Magnussen entered and exited with a positive outlook.

“I’m going to leave here with a big smile on my face although we didn’t finish the race due to a mechanical issue. I’ve had a very fun experience and want to say thank you to everyone involved,” Magnussen said after the race.

“All-in-all, this weekend has been a fun experience. I’m very thankful to Arrow McLaren SP for the opportunity. I want to wish Felix a speedy recovery and to be back where he should be in the car.”

Magnussen spent a total of six laps in the lead. That’s six more laps than he led across the entirety of his Formula One career. That was double the amount that his father Jan led over 11 starts in the CART series in 1996 (with Penske-Hogan Racing) and 1999 (with Patrick Racing).

While he obviously didn’t take the lead on merit alone, once he got up to the front, he began to look like a driver who belonged there. Last month Magnussen attended the Indianapolis Motor Speedway during practice for the Indianapolis 500, which by itself sparked discussion of whether or not the 28-year-old Dane wanted to follow Grosjean into the series.

“The Indy 500 is definitely something that I want to do one day,” Magnussen said. “I’m not really actively working towards it at the moment, just kind of taking things one day at a time. I have my season with Chip Ganassi Racing and Cadillac in (IMSA) DPi and that’s my main focus. And then what happens in the future and will happen. I’ve said that IndyCar and especially the Indy 500 – it is a dream to do it, and we’ll see if it happens from there.”

Magnussen’s Road America debut came at too short notice and was too brief to draw firm conclusions about his potential as an IndyCar driver. But he left tantalising unanswered questions about what he could do with a full-time drive, and ‘K-Mag’ would surely be welcomed back to IndyCar any time in the future – be it with McLaren SP, Ganassi, or another team.