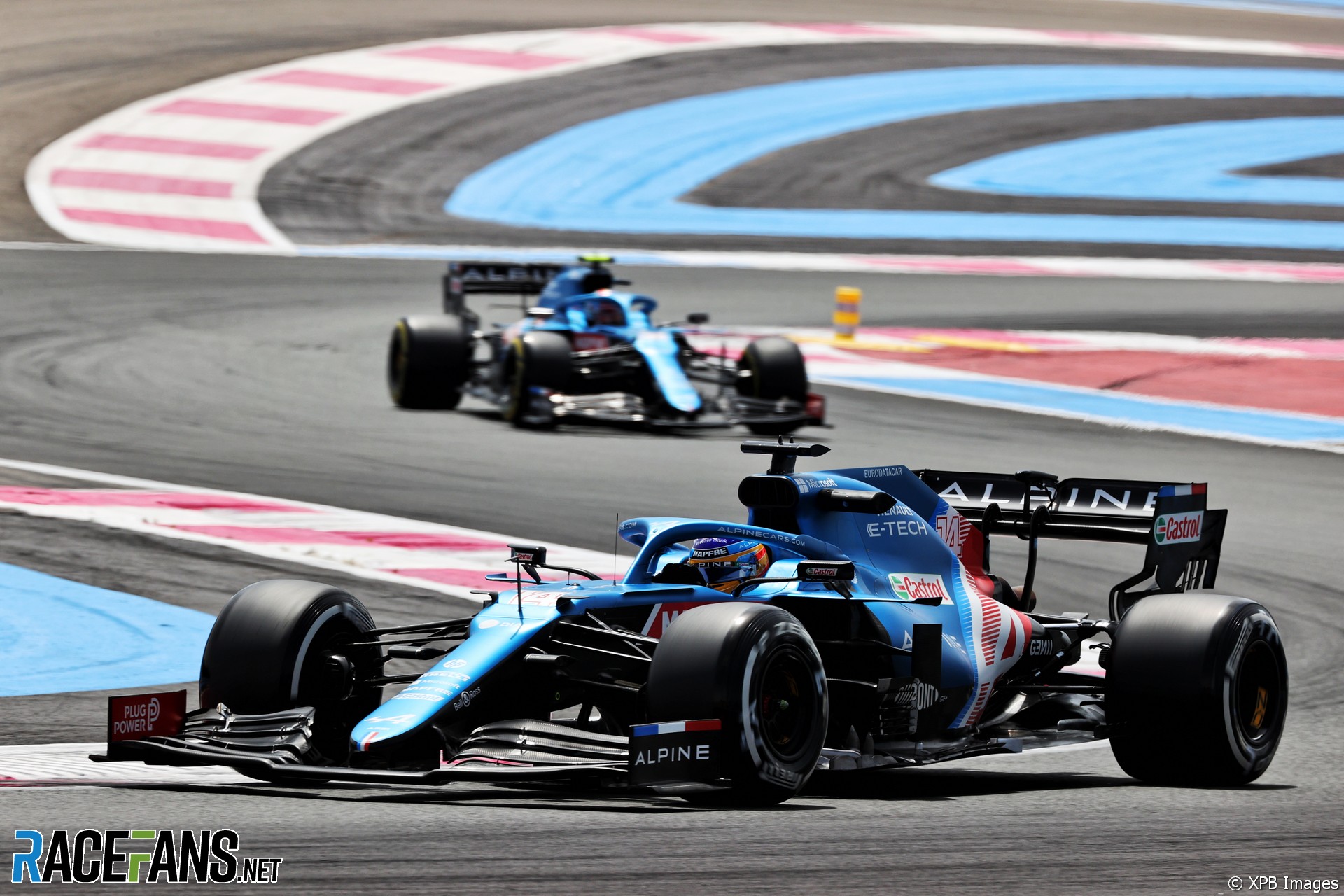 In the round-up: Fernando Alonso says the French Grand Prix showed Alpine can beat Ferrari at tracks where tyre degradation is high.

After lining up behind both Ferraris at Paul Ricard, Alonso finished ahead of them. He is hopeful Alpine can produce more of the same at tracks where tyre degradation is high.

“In qualifying, they are four tenths or half a second faster. But then in the race, there are some circuits [where] they are very hard on tyres like a Portimao or here, and we have the chance to to fight with them, which is always nice.

“In some of the circuits it is a disadvantage so we benefit from that. But we still need to work on trying to understand this tyre.

“It felt nice to finish in front of the Ferrari, but at the end of the day, it doesn’t matter who is in front, you try to score points. Four points in the pocket, starting ninth, finishing eight, it’s a good performance.”

Mercedes “left points on the table”

Mercedes team principal Toto Wolff says the team understands where it went wrong at the last race, and is aware it must stop throwing points away after losing ground in both championships last weekend.

“While we know there is still a long way to go and plenty more opportunities to come, in a season like this, every single point will matter and make the difference,” he said. “And we’ve left points on the table at the last few races.

“We’ve debriefed France and understand the areas where we have the opportunity to improve. So, now it’s all about focusing on bringing those improvements to the next two rounds in Austria, where hopefully we can swing the positive momentum back in our favour.”

After George Russell delivered Williams’ best result of the season to date in France, the team’s head of vehicle performance Dave Robson confirmed the team “made some improvements to the FW43B” at Paul Ricard.

“This weekend we will be looking to consolidate those gains and to confirm the performance uplift in slightly different conditions,” he added.

Today is a VERY good day. Why? Because 30-odd years ago I arrived in #F1 as “the only gay in the village”, branded “fat faggot” by one of the drivers, & today the F1 team I work for has festooned its cars with #Pride logos. I’m not crying. You’re crying. #WeRaceAsOne #LoveIsLove pic.twitter.com/9fz2eJQrAk

.@ESPN earned 1.056 million viewers for Sunday's grand prix @PaulRicardTrack, the best for an F1 race since the 2019 event in Canada on @ABCNetwork (1.13 million). pic.twitter.com/QJnAR2qGzj

'Like a Super Bowl every year': Miami mayor Francis Suarez on the city's Formula 1 race (The Drive)

"The truth is that it would not surprise me if, in the future, we do see it downtown. Because I think what happens is that every major sports franchise, they come into a city, they get their first stadium, if you will, and then when they show and they prove that they work, and that it's a great thing for the community, they usually get their second stadium."

Drive to thrive: Netflix's docuseries a boost for Formula 1 (NBC)

"Tim Hauraney, a former professional driver who is now a Formula 1 commentator and analyst for Canada’s The Sports Network, said the difference is palpable. 'I've never seen it like this, and I've been involved in the sport, in racing, since I was nine years old.'"

"Gene Haas, the other owner with his name on the building, hasn't been around, either. Your best chance to see Haas of late is on television at a Formula 1 race, where the two Haas cars are among the worst in the field this season."

"The talent lined up to take part this year reflects the breadth of the areas that the Lions covers, and the crossover between its world and the showbiz universe. They include actor and Pilot Wave executive producer Gal Gadot; actor, director and Nine Muses Entertainment founder Bryce Dallas Howard; musician and president and chief strategy officer at Carnival World Music Group, Wyclef Jean; musician Ed Sheeran; and Formula 1 racing driver Fernando Alonso."

Was Jacques Villeneuve’s failure to win a race after his world championship season down to poor team choices or something else?

Jacques was the kind of driver that excited me back in the 90s. And reading about him later, way past his F1 days, made me realise how good and unusual a driver he was.

He was a bit of a joke in the later years, but a lot of his points were bang on. I remember him going public against Sauber for not taking advantage of the rule allowing teams on the lower half of the grid to use a third car. BAR in 2004 and McLaren in 2005 surely got a lot of info that translated into the good results they had, yet Sauber ran two cars always.

It’s one of those guys that you don’t fully understand how they weren’t more successful, how they gathered the wrong people around them or chose the incorrect path. A bit like Alonso, only Fernando kept delivering even with the odds against him.
@Fer-no65

10 comments on “Alonso: Alpine can take fight to Ferrari on high-degradation circuits”