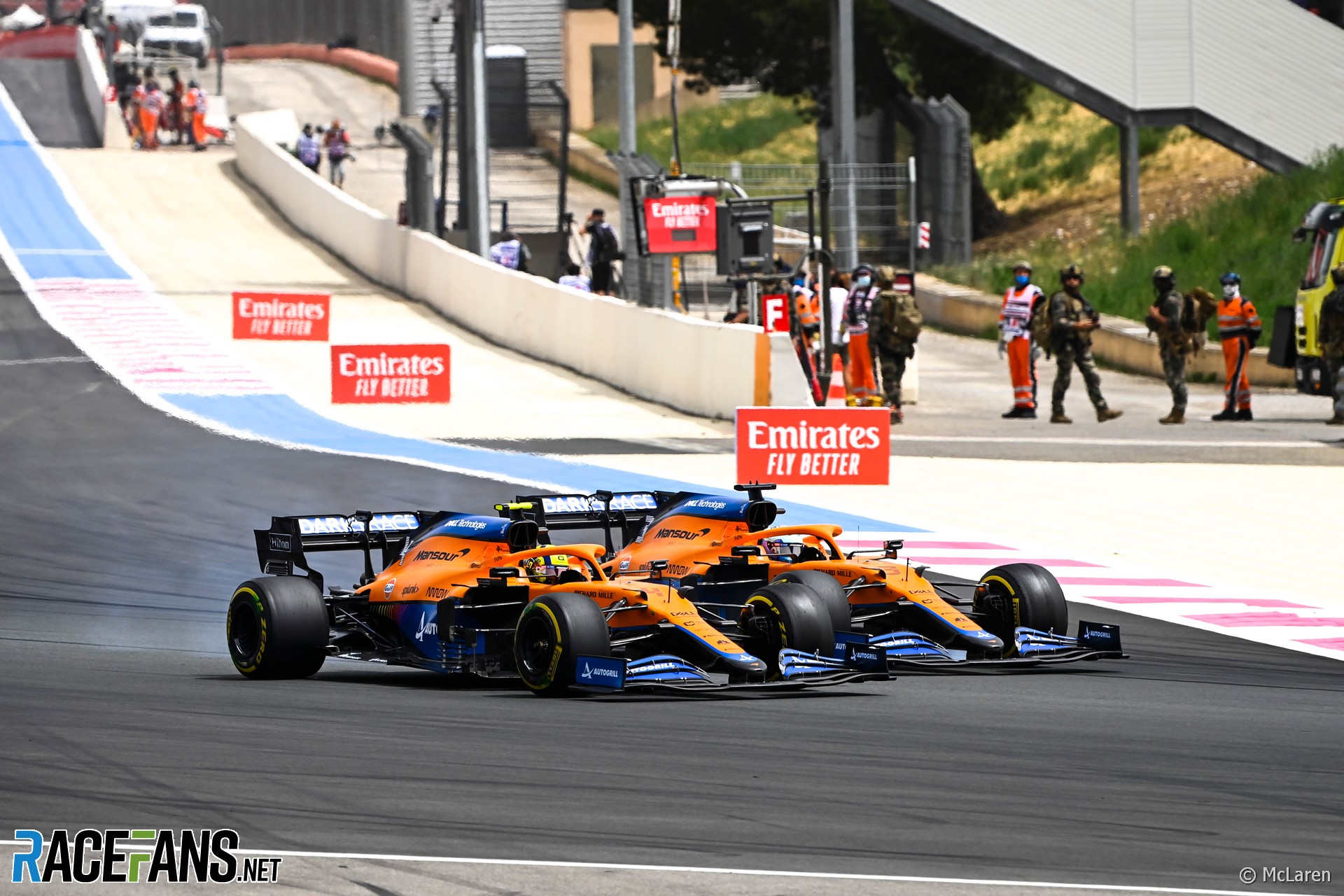 In the round-up: McLaren say their drivers have clear instructions about when they are allowed to race each other.

Seidl: McLaren drivers have clear rules about racing each other

During the French Grand Prix McLaren’s Lando Norris went off-track after being pushed wide by team mate Daniel Ricciardo, who had moved to defend against him.

After the race, team Principal Andreas Seidl said he had no concerns about their drivers’ behaviour, as they have been told what’s expected from them.

“The rules are clear for our two drivers and within the team,” Seidl said. “That they’re both allowed to race for position if there’s not a strong reason for not allowing them to race because of, let’s say, there’s a huge difference in terms of pace, because of strategy or whatever reason.

“In the end, I guess what we have seen was on the limit but was ok. It wasn’t touching, that is the most important.”

After a frustrating French Grand Prix when Alpine slipped from strong Friday performances to both cars finishing outside the points on Sunday, Esteban Ocon says that it’s impossible to predict their position in the midfield currently.

“I don’t know at the moment. I think if we look at the last year when we raced there, we were a contender for top 10,” he said.

“Obviously, this year everything’s a bit different. But I think we will be navigating through there. The aim is to is to be in the top 10 again, score points and try to do the best we can. But at the moment, until we put the car there, we are not going to be sure.”

Christian Horner has said that Red Bull taking the French Grand Prix win, at a circuit previously dominated by Mercedes, was ‘fantastic’ but there was still a long championship to go.

“We came [to Paul Ricard] knowing that this would be one of Mercedes’ strong circuits. They’ve led every lap there prior to this race, bar one. And that was with Lewis.

“So it’s fantastic that we’ve that we’ve had a big score here this weekend. It’s the win the Max should have had two weeks ago. But you can see how close it is. There’s nothing between the two cars. So we’ve just got to keep pushing and keep looking for performance and pushing all the way through.

“There’s such a long way to go in this championship. You can’t take anything for granted.”

Rob White, who worked as a power unit technician on Jenson Button’s McLaren in 2014, has invented what he says is a new aerodynamic concept to allow electric vehicles to run more efficiently. His bike, which he claims produces 70% less drag than a conventional superbike thanks in part to a void running through its centre, lets vehicles use less power to reach higher speeds. White intends to use it to make a land speed record attempt next year.

White said the project had a genuine purpose for the electric vehicle industry, as well as being a bid to be the fastest. “The records are all champagne, but are actually the insignificant part of the story.

Today we celebrate #INWED21, and what better way to mark the occasion than re-living our celebrations from Puebla, with Team Manager Delphine Biscaye representing ROKiT Venturi Racing on the podium in Mexico.#PueblaEPrix #MadeInMonaco #ABBFormulaE pic.twitter.com/IiRyarGXw8

‘The future potential is incredible’: How Formula One transformed its US reach  (Black Book Motorsport)

"'We know our TV audiences are up,' says Targett-Adams. 'The US was our fourth biggest market in 2019 in terms of unique reach. We have had a very strong start to the 2021 season. Our race audiences are one to 1.5 million-plus.'"

"'Drive to Survive obviously plays heavily on what goes on behind the scenes in Formula One, and I think that that’s something the fans haven’t really seen until Netflix came along.... Something like Rush really showed the relationships outside of that; taking it a step further and seeing the private relationships.'"

Jeddah, Le Mans and Susie Wolff: getting to know you with Reema Juffali (BRDC British F3)

"Juffali: 'It’s been a short, but action packed three-year career. Having had no real racing experience, I decided to jump into single seaters with British F4 in 2019 and 2020 to learn my craft the right way.'"

Ahead of what may very well be a wet Styrian Grand Prix, X1ZNet says that rain may have had the biggest effect on Paul Ricard’s surface, despite no wet sessions.

Personally, I believe the rain showers that cleaned the existing rubber from the track was probably more significant that changes to the track or surface.

I remember the same thing happening in Montreal 10 or 15 years ago – bright and sunny all three days, but late Saturday and overnight, there were heavy thunderstorms, but everything dried up by Sunday morning.

The drivers were unprepared for the lack of grip and increased wear.
X1ZNet