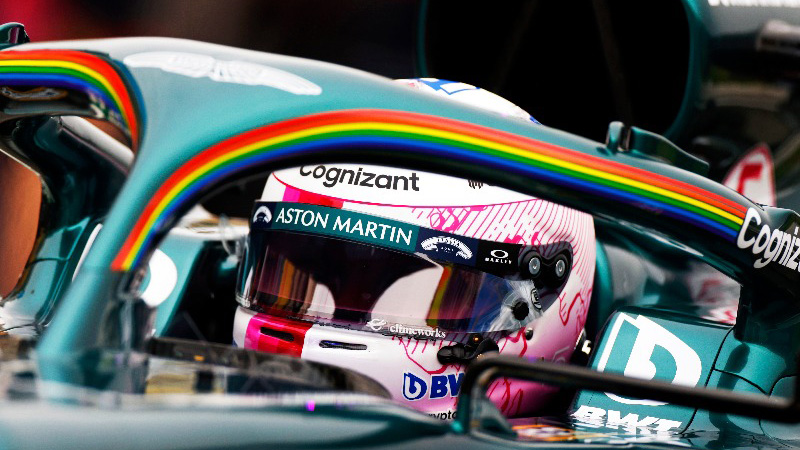 Sebastian Vettel has criticised the decision of football’s governing body UEFA to prevent a stadium in Germany from displaying the colours of the pride flag at a Euro 2020 match yesterday.

Munich city council intended to illuminate the city’s stadium in the flag’s rainbow colours ahead of Germany’s match against Hungary to show support for LGBTQ+ rights during pride month. But Euro 2020 promoters UEFA blocked the move, claiming it “contravened its regulations as a political and neutral organisation”.

“I don’t know all the details but I think to excuse it as a political message I think is the wrong path,” he said in response to a question from RaceFans.

“It’s definitely not harming anybody and I think it’s a great message that they would have loved to send out and were not allowed. So I think some institutions need to rethink their approach on banning these type of messages. As I said it’s definitely the way forward and I didn’t understand it.”

FIA president Jean Todt recently commented on the relationship between sport and politics, indicating he disagreed with suggestions Formula 1 should avoid racing in countries with poor human rights records.

“Incidentally yesterday Stefano [Domenicali] was there, he came to visit me, and I had Jacques Toubon, former justice minister who has been until last year in charge of human rights in France, and I spoke with him about that. And everybody is in favour of having races wherever around the world.

“The only thing is, I mean, we are a sport, it’s also something I discussed very often with the Olympic Committee, with Thomas Bach, with Christophe De Kepper, because they have the same problem. And clearly we consider that sport should not be involved with politics.”