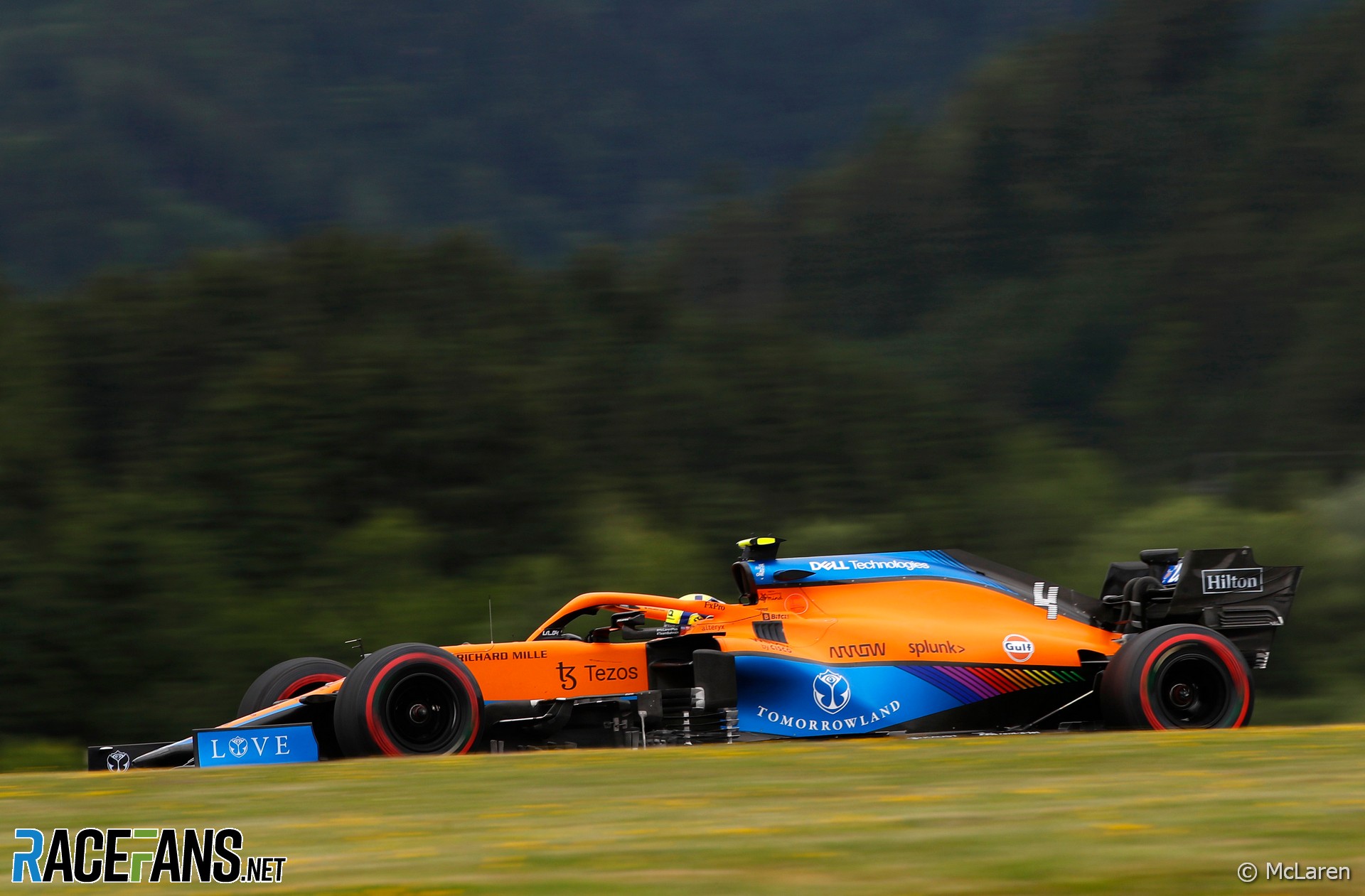 The most pressing question arising from Friday practice at the Austrian Grand Prix is not who is fastest on which tyres, it’s when will those tyres drop off?

A rain shower in the second session, just as drivers were embarking on their final qualifying simulations of the day, not only meant we didn’t get to see all drivers at their most representative pace but also reduced the grip level of the Red Bull Ring for the final half-hour.

The end of Friday’s running was used for long runs, on the softest C5 tyre for some, most on the C4 too. One of the reasons for that was running on the latter compound through the day was frequently done using the new prototype rear tyre construction from Pirelli, so teams didn’t have sufficient data on the actual C4 rear tyres – the softest compound in use in last week’s Styrian Grand Prix – over a stint in the mild conditions at the circuit.

But the addition of rain made the end-of-practice data of limited use anyway, because tyre degradation was occurring at a different rate to that of a dry track. Ferrari had observed particularly bad graining in first practice, and Charles Leclerc did long runs on both of the soft compounds in second practice. While there was less locking up, particularly of the front-right, and less graining in the afternoon it appeared to come at the cost of lap time as Carlos Sainz Jnr and Leclerc ended up 13th and 16th fastest.

Perhaps unsurprisingly, the driver who could take the C4 tyre longest was Red Bull’s Sergio Perez, who extended a planned stint of 21 laps to 30. Red Bull and AlphaTauri’s drivers rushed to the top of the time sheets on the C4 in both sessions and Verstappen’s benchmark on that compound could only be beaten by the Mercedes drivers on the C5.

Pirelli reported a 0.7 second gap in lap time between the two compounds, although Verstappen’s pace suggests that gap is halved when one is bolted to a Red Bull. That corresponds with the view of Mercedes’ Lewis Hamilton, who said his rivals had two tenths in hand and he was expecting them to “to turn up a little bit more” come qualifying.

Red Bull’s preference to run on the C4, with only nine laps clocked up between Perez and Verstappen on the C5 in second practice, means it’s not really clear what Red Bull’s advantage on the softest tyre may be. Was the team being cautious?

“The soft tyre is pretty racy,” Red Bull’s team principal Christian Horner said of the C5. “It’s very much a one-lap special and could be tricky if we end up qualifying… the delta on it is quite large so can you afford not to take it in Q2?”

Horner’s downplaying of his team’s ability to reach the final segment of qualifying using a slower compound is simply games. Throughout both practice sessions, the Red Bull was generating heat in its tyres quicker and was so planted it still had more grip by the final sector where cars with less downforce would slide and grain the tyres. That was most evident at Ferrari and Aston Martin, whose drivers fought with major oversteer at times. Leclerc was able to always save it, Aston Martin’s Lance Stroll did not and spun twice.

Pirelli’s Formula 1 head Mario Isola thinks the faster C5 “is close to a qualifying tyre” at the Red Bull Ring, because if teams want to pull off a one-stop strategy they won’t want to be starting on the softest tyre.

“That is obviously affecting the qualifying tomorrow because if they want to plan a race on one-stop strategy they have to start on the medium and move to the hard,” said Isola. “If they are forced to qualify with the soft the strategy has to be a two-stop.”

Red Bull and Mercedes have such a gap up front that if they’re going to be lapping the rest of the grid again then they can factor in a two-stop strategy to take themselves out of traffic when approaching cars to be lapped. However for the next-best outfits from the Styrian Grand Prix, Ferrari and McLaren, it’s the opposite problem and their Friday strategy shows it. They may struggle to complete the race with one stop, but go for two and they may end up outside the points.

The two teams were the only ones to use the C3 tyre in the morning, then McLaren’s Lando Norris did two stints on it in the afternoon. He isn’t yet committed to the more optimal one-stop strategy though in this weekend’s grand prix and said the softer compounds were “quite difficult to manage”.

After trying various tyre and set-up combinations, Norris goes into Saturday practice with one more set of the C4s and one more set of the C5s to use than the Mercedes and Red Bull drivers he’s desperate to catch. Maybe his Friday plan could reward him over the next two days.

There was one more storyline on Friday, which was the practice-only drivers. Guanyu Zhou looked solid in his first ever official F1 session with Alpine, completing aero testing for the team and going 14th fastest in FP1, while Alfa Romeo’s reserve driver Callum Ilott did no harm to his race seat ambitions for 2022 by having a trouble-free session in 16th place – albeit a second slower than Kimi Raikkonen who used an extra set of softs – and Williams’ Roy Nissany outpaced regular driver Nicholas Latifi.

NB. The quickest lap times set in both last year’s race at the Red Bull Ring have been used as a reference.