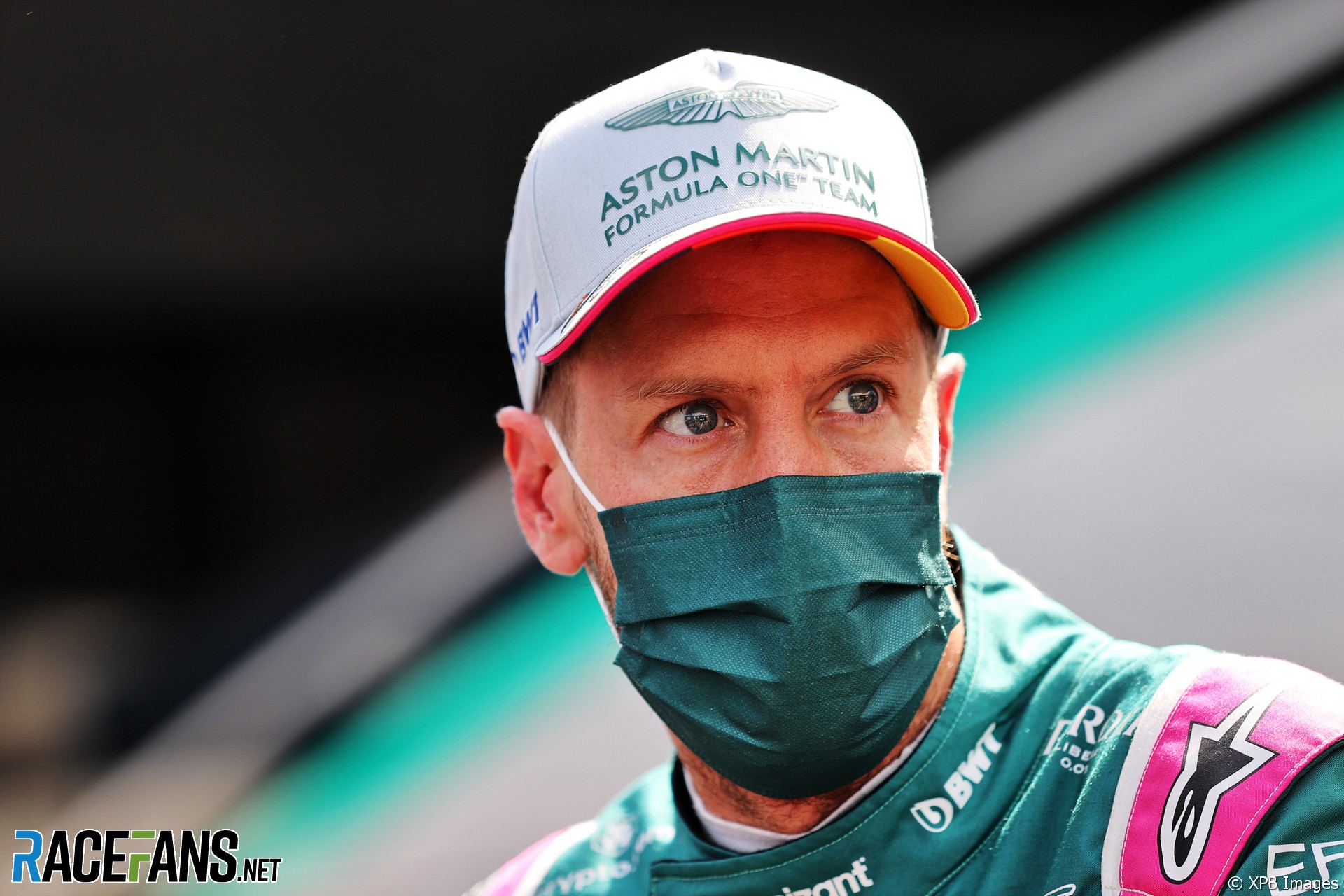 When FIA race director Michael Masi informed teams that race control would pay close attention for any drivers deemed driving “unnecessarily slowly” through turns nine and ten during the Austrian Grand Prix weekend, the intention was to avoid the very scenario that unfolded during the final moments of Q2.

Fortunately, the sport avoided a potentially disastrous accident. But Fernando Alonso said his weekend “is over” after he was held up by Sebastian Vettel into turn ten on his final flying lap, forcing him to back out and ruining his chances of progression, dooming him to 14th on the grid

Vettel, Valtteri Bottas and Carlos Sainz Jnr were all investigated for failing to follow the new rules, but only the Aston Martin driver was punished.

What happened at the end of Q2

Trains of cars queuing in the final sector before starting a lap has become a common sight in F1 qualifying sessions in recent years. While the temptation of gaining a tow from a rival can be strong – especially around a high-speed circuit such as the Red Bull Ring – the impact of dirty air on modern aerodynamics can destroy a qualifying lap.

In the final minutes of Q2, Alonso was the first driver on circuit to begin his final flying lap, with Pierre Gasly, Antonio Giovinazzi and Yuki Tsunoda spaced evenly behind the Alpine driver.

With Perez also passing Vettel, the Aston Martin driver became the last car in the queue to begin his final lap. But by this stage there were only 20 seconds remaining in the session and Alonso’s Alpine was now closing quickly on Vettel on his hot lap.

By the time Vettel accelerated on the approach to turn ten, Alonso was rounding turn nine at full speed, only to find Vettel’s Aston Martin in the braking zone for the final corner. While Perez was able to cross the timing line to begin his lap with only one second remaining, Vettel received the chequered flag and was forced to abandon his final attempt.

Alonso was furious as, having set two personal best sector times up to that point, he was forced to back off and was therefore eliminated from qualifying in 14th.

“What the fuck was that?,” the Alpine driver raged over his radio, gesticulating his disgust at Vettel, who held his hands up apologetically in response. Despite having failed to start his final attempt, Vettel still progressed comfortably through to Q3, eventually securing a provisional grid slot of eighth.

What the drivers say

Alonso placed the blame at the feet of the Aston Martin engineers, rather than Vettel himself – but believed they were not the only ones guilty of defying the race director’s warnings.

“I don’t think that is his fault because, honestly, when we are driving in turn nine, turn ten, we rely completely on our engineers and also on the radio, and he didn’t have free track in front of him,” said Alonso.

“The nature of the circuit and the way that people were slowing down in turns nine and ten – which are written in the notes of the grand prix that you cannot do it – is the biggest topic, probably. I guess they will not penalise ten or 12 cars, which is the only way that could change our weekend. So it is an unfortunate situation and an unlucky situation.”

Bottas, who was investigated for driving too slowly into the entrance of turn nine, passed Perez and Vettel on the approach to the corner. He believes the so-called ‘gentlemen’s agreement’ between drivers not to cut the queue at the end of out-laps is not being consistently honoured.

“I think that gentlemen’s agreement, it sometimes feels like it’s there, sometimes not,” Bottas said.

“Normally, by the time you get to the last corner, then people kind of respect it, I feel. But there’s so many different cars doing different type of out-laps. Some cars, they need a bit faster out-lap.”

Nikita Mazepin – who drew the ire of some on his debut for jumping the queue in qualifying in Bahrain and promptly spinning off at turn one – highlighted the hypocrisy he saw in the Q2 blocking debacle.

“First of all, I was made a very easy target in Bahrain qualifying and everyone’s made a big deal out of it at the time when I didn’t know very much about the qualifying myself in Formula 1 – it was my first ever one,” Mazepin said.

“Yesterday in the driver’s briefing, our race director has made new rules saying that you have to make your track position in turn eight and you’re not allowed to pack up turns nine and ten, which means that you have to keep up the speed into those two corners. And what I’ve seen happened in Q2… is the exact opposite. And I think every driver is human. They can get caught out and they’ve been caught out. Everyone just needs to apply the same rules to each other and then it will be a happy place.”

What the stewards say

Almost immediately after Alonso was seen to be blocked by Vettel from his onboard camera live on the world feed, the stewards announced they would investigate the incident after qualifying.

While it was of little surprise when Vettel was later handed a three-place grid penalty for the incident, what was more curious was the stewards’ reasoning for absolving Bottas and Sainz of appearing to breach Masi’s directions.

“When Alonso approached the last two corners (nine and ten), there was still a queue of three cars preparing for their final qualifying,” the stewards explained in their decision. “Vettel was the last car in this line and impeded Alonso and as a result, Alonso had to abort his final qualifying lap.”

With no mention of the race director’s warnings about driving too slowly through the penultimate corners, Vettel’s offence was purely that of impeding a rival – the same Yuki Tsunoda was deemed guilty of during qualifying for the Styrian Grand Prix a week prior.

Bottas and Sainz, however, were both cleared of driving unnecessarily slowly in the final corners, with the stewards offering the same explanation for both drivers:

“At the end of Q2 [Sainz and Bottas] slowed down at the entry of turn nine to create a gap for [their] final lap. This is contrary to the race director’s event notes 24.2a.

Onboard footage from both Bottas and Sainz reveals the pair both hovered at the apex of turn nine at a greatly reduced pace before eventually accelerating up to speed. This appears, on paper, to directly convene Michael Masi’s instructions not to create gaps “between the entry of turn nine” and the final corner.

Beyond this, Stroll, Ricciardo, Hamilton, Russell and Bottas all appear to be driving at a reduced speed around the apex of turn nine before their final laps in Q2, with Perez only unable to go faster as he was sitting under the rear wing of Bottas’s Mercedes.

Why Bottas and Sainz drew the attention of the stewards and not their rivals also, is unclear. If the pair were excused for going too slowly due to the cars around then, then is Vettel not a victim of the same set of circumstances?

Finally, there is the matter of the gap that Perez and Vettel built up on the run through turn eight to back themselves up from the pack ahead. If the pair were trying to ensure that they would be up to speed by the entry of turn nine – as the new rules obliged them to – then their efforts were frustrated by the trio of Hamilton, Russell and Bottas all jumping ahead of them in the queue, leaving them with hardly any more time and space to give themselves a gap to start a clean lap.

Vettel’s efforts to adhere to the new rules therefore saw him ultimately fall foul of another. Aston Martin CEO Otmar Szafnauer was unimpressed.

“It wasn’t just a ‘gentlemen’s agreement’, it was written in the race director’s notes for the weekend,” Szafnauer pointed out, “so it’s part of the local rules that you had to make space prior to turn nine and not in the middle of it or the entry of it.

“The others didn’t do that, Seb did. And because he follows the rules, he’s the one that gets called to the stewards. So it’s a bit unfair. I must say it was unfair on Fernando too, he was on a quick lap and Seb had nowhere to go.”

55 comments on “Analysis: The “unfair” decision to penalise one driver when many were at fault”