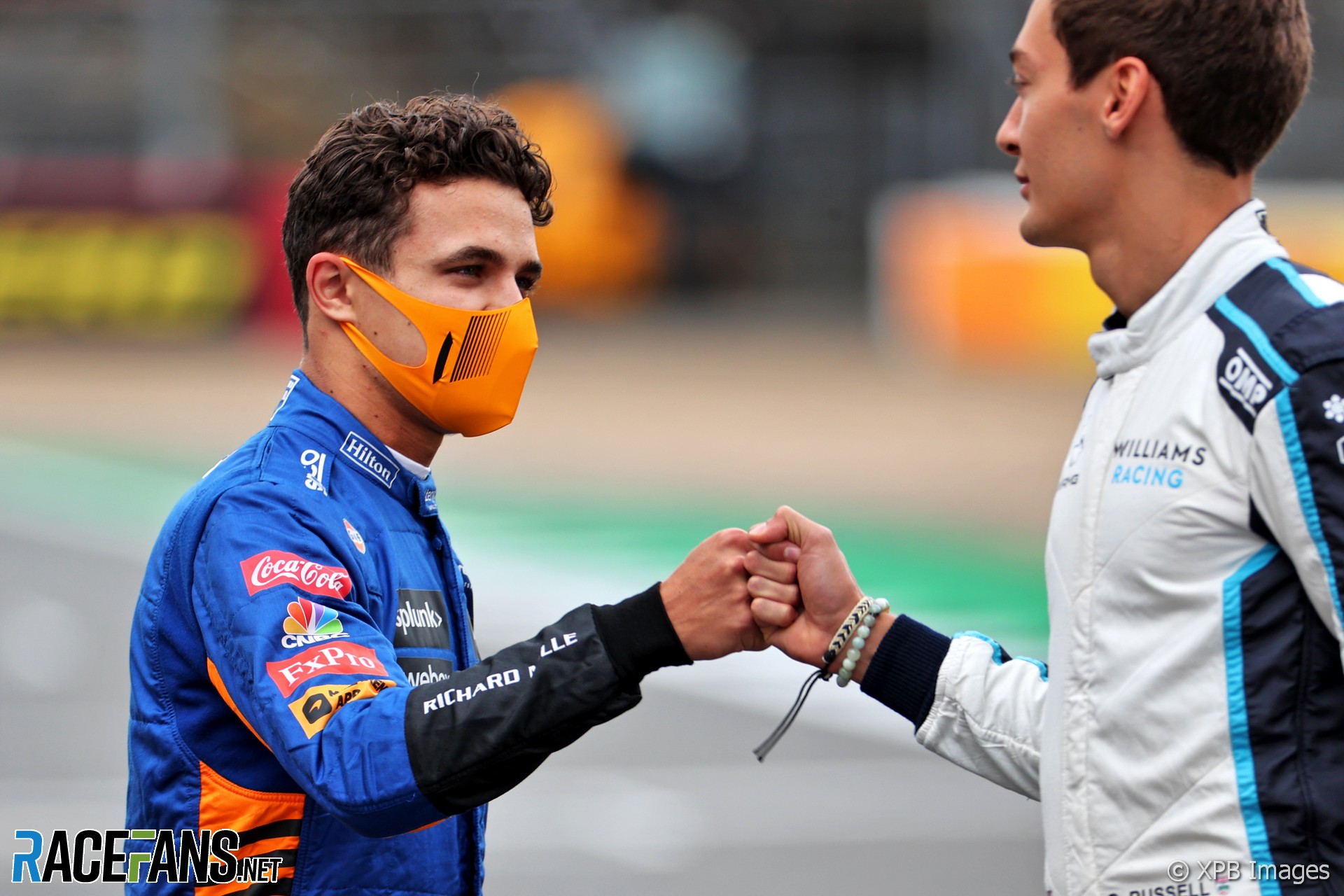 In the round-up: Lando Norris says returning to the F1 paddock is a welcome distraction after being mugged last weekend.

Norris glad to put Wembley incident behind him

After being mugged following the Euro 2020 final at Wembley, Lando Norris said that although the incident had affected him, being back at F1 was a welcome distraction.

“I’m alright, maybe not in perfect condition, but getting there. I think one of the best things really is being able to come to Silverstone, get my mind off of it and and focus on a different job.

“So just excited to be here, getting there and I’m sure I’ll be all right tomorrow.”

Daniel Ricciardo said that driving Ayrton Senna’s 1990 McLaren at the Goodwood Festival of Speed last weekend had been a childhood dream realised.

“It was pretty awesome. It was, I don’t know, one of those just crazy, a little bit ‘pinch yourself’ moments or experiences.

“I found myself cleaning the car at one point because I as a kid I would have loved to have just been anywhere close to that car, let alone like, touch it, clean it, sit in it, whatever. I was there and certainly enjoyed just being a part of it and getting [to be] able to drive it.

“[It was] just surreal like we do get so caught up sometimes in like the competition of the sport. One day when we finish, we’ll look back on it with fond memories. But it was definitely hard to not be in the moment and appreciate that for what it was.”

After three races in a row many people in F1 used the following weekend for some downtime but Fernando Alonso chose to participate in an endurance karting race at his own karting track, where he reunited with a former F1 rival.

Alonso said the event meant the British Grand Prix is his fifth consecutive race weekend but that he had enjoyed it. “We [did the race] in my place, in my circuit, a couple of endurance races with a four-stroke kart and my team was Pedro de la Rosa and another two friends from Spain.

“We spent the day with friends and it’s not an ultra-competitive race, but we still have fun. It’s a nice way to spend weekends, behind a steering wheel.”

After W Series announced its new teams structure, Veloce have appointed Mariella Bailey to lead their single seater programme. Bailey has previously worked in an operations role for Veloce’s Extreme E and esports programmes and played an early role in Dare To Be Different, the grassroots campaign to get more girls and women involved in motorsport.

Bailey is the daughter of former F1 driver Julian Bailey, who drove for Tyrrell in 1988 and Lotus in 1991, scoring a single point-placing finish at the 1991 San Marino Grand Prix.

TikTok logos will appear on @AstonMartinF1's headrest and halo from this weekend's #BritishGP as part of a tie-up between the two which will see the #F1 team produce "exclusive social content" for the platform. pic.twitter.com/KhaIpB58yp

"'Yuki did a fantastic job last year. I was quite surprised, to be honest. I don't think anyone expected him to have such a strong first year, but he really grew a lot, especially towards the end of the year. He really came alive, and it was impressive'"

"Moore: 'It’s one thing racing at Silverstone, the home of British motorsport, but to get the opportunity to race on the biggest weekend of the year in support of the British Grand Prix will be something I’ll cherish for the rest of my life. I’ve raced at Silverstone a few times before and have done quite well there, so I’m hoping I can repeat that this weekend.'"

"Addressed an issue where users would experience a corrupt save if they edited their vehicle's livery from within the MyTeam HQ. Saves that were previously corrupted as a result of this bug will be able to be resumed after applying the patch."

"Motorsport Games’ partnership with IndyCar will produce a brand-new franchise that has been eagerly anticipated by racing and gaming fans. The IndyCar series' bold, audacious and unapologetic style of racing is primed for a video game franchise built entirely around its expanding brand."

"Heavy rains and once-in-a-generation floods have severely hit the Rhineland-Palatinate state where the Nürburgring is located. The area and people have been badly affected, with emergency services working around the clock to save lives. A state of emergency has been declared for the region."

After F1 unveiled a 2022 concept car demonstrating regulations intended to improve cars’ ability to follow each other, GT Racer explained some of the issues with dirty air and why the problem lies with the car behind more than the car ahead of it.

It’s less about the speed and more about how you produce it.

You could probably have cars that offered identical peak performance and lap times to what we have now but which were better in terms of racing if the way they were achieving that performance was been generated in a different way.

It’s the same misconception people have with dirty or turbulent air. A car that produces less or even no downforce at all will still produce a lot of dirty air because anything travelling through the air at 200mph is going to create a ton of turbulence.

The problem therefore isn’t that the cars are producing so much turbulent air but more how sensitive the aerodynamics are in terms of been affected by it.

If you look at IndyCar for example. On ovals they still struggle to follow closely despite having way less aero in the low drag setup and relying more on the underwing and ground effects because at 220mph-plus the cars are still very sensitive to the turbulent air.

And that is why you still see cars just understeer straight into the wall if a car ahead moves up the track and takes all the air off the front end of the car behind. In that situation you can even sometimes see the car behind just swap ends due to the sudden shift in aero balance.
@GT-Racer