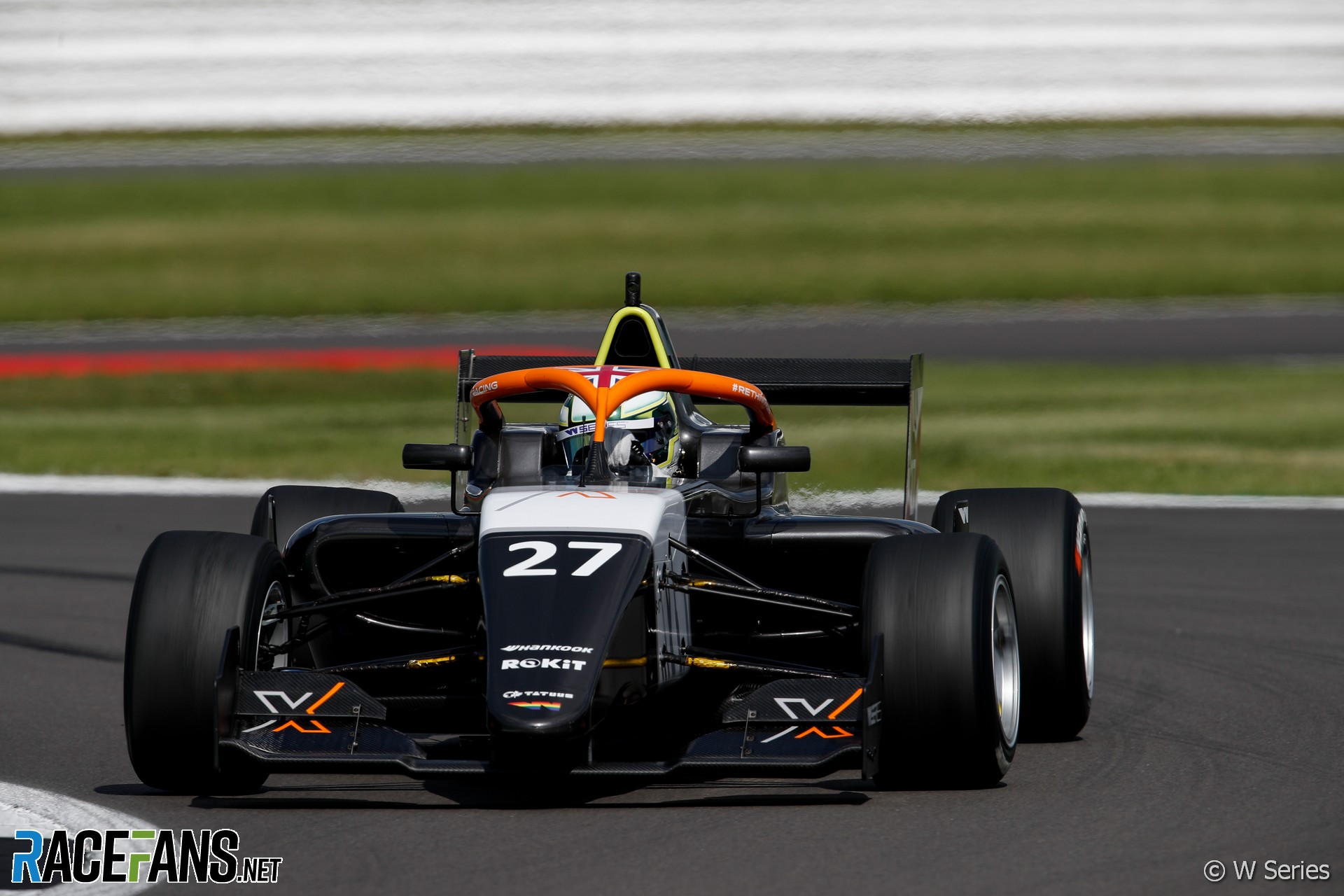 Alice Powell has scored her second win of the year in W Series, and triumphed on home ground for the second time, after her victory at Brands Hatch in 2019.

She didn’t have a straightforward run to victory after taking pole position yesterday. Second-placed Fabienne Wohlwend, who was three tenths of a second slower than her rival in qualifying, good start and went into Abbey side-by-side with Powell.

Wohlwend finally made the pass stick through The Loop. Behind them Jamie Chadwick took up the chase was initially able to keep up, but within the first three laps slipped back from the top two by more than a second and a half.

Miki Koyama, who had suffered technical difficulties at the previous round, had more problems at the start and stalled on the grid. Koyama was able to start her car but a substantial distance behind the pack.

Beitske Visser’s start was relatively poor, forcing her back down to seventh on the first lap while Emma Kimilainen, Sarah Moore and Nerea Marti moved forwards. But Kimilainen seemed unable to catch Chadwick, especially with initial pressure from Moore forcing her to defend.

Powell and Wohlwend continued to build up their advantage and were quickly able to pull a nearly four-second gap to third-placed Chadwick. After ten minutes of racing, Powell was still within six tenths of a second to Wohlwend but most other cars had spread out to leave gaps of more than a second throughout the field.

With 17 minutes to go a train had developed behind Kimilainen. Nerea Marti was able to pass Moore just before Abbie Eaton made a pass on Belen Garcia that almost let Jessica Hawkins through behind her, before Garcia slammed the door shut.

Koyama’s trouble continued as she stopped on-track with 12 minutes remaining, pulling over in the run-off at the outside of Village. The Safety Car was required to retrieve her car.

The race restarted with just under seven minutes remaining. Wohlwend kept the lead initially, but ran wide out of Club corner. Powell was waiting to pounce and took the lead taking the lead down the Hamilton straight and immediately drawing out nearly a second on Wohlwend. She kept that margin, despite running so wide at Luffield that she dipped a wheel into the gravel but managed to hold it.

Piria and Hawkins duelled for the final laps, repeatedly swapping before Hawkins finally made it stick to keep hold of 11th place.

Moore and Visser ran side-by-side for most of the penultimate lap, Abbi Pulling joining them to nearly go three-wide through Brooklands. Visser eventually passed Moore, immediately having to defend from Pulling behind.

On the final lap, Belen Garcia made contact with Hawkins, who moved up to 10th, but may be penalised for the move.

The chequered flag saw Powell maintaining her comfortable lead, Wohlwend behind and Chadwick well ahead of the pack but not close enough to have troubled the leaders.

Powell re-took the championship lead with her win, with Chadwick relegated to third and Moore now third in the standings. However after the race came to an end race control announced Chadwick was under investigation for a post-race infringement of the race director’s instructions, which means Powell’s points lead may yet grow further.

One comment on “Powell fights back for home win at Silverstone”