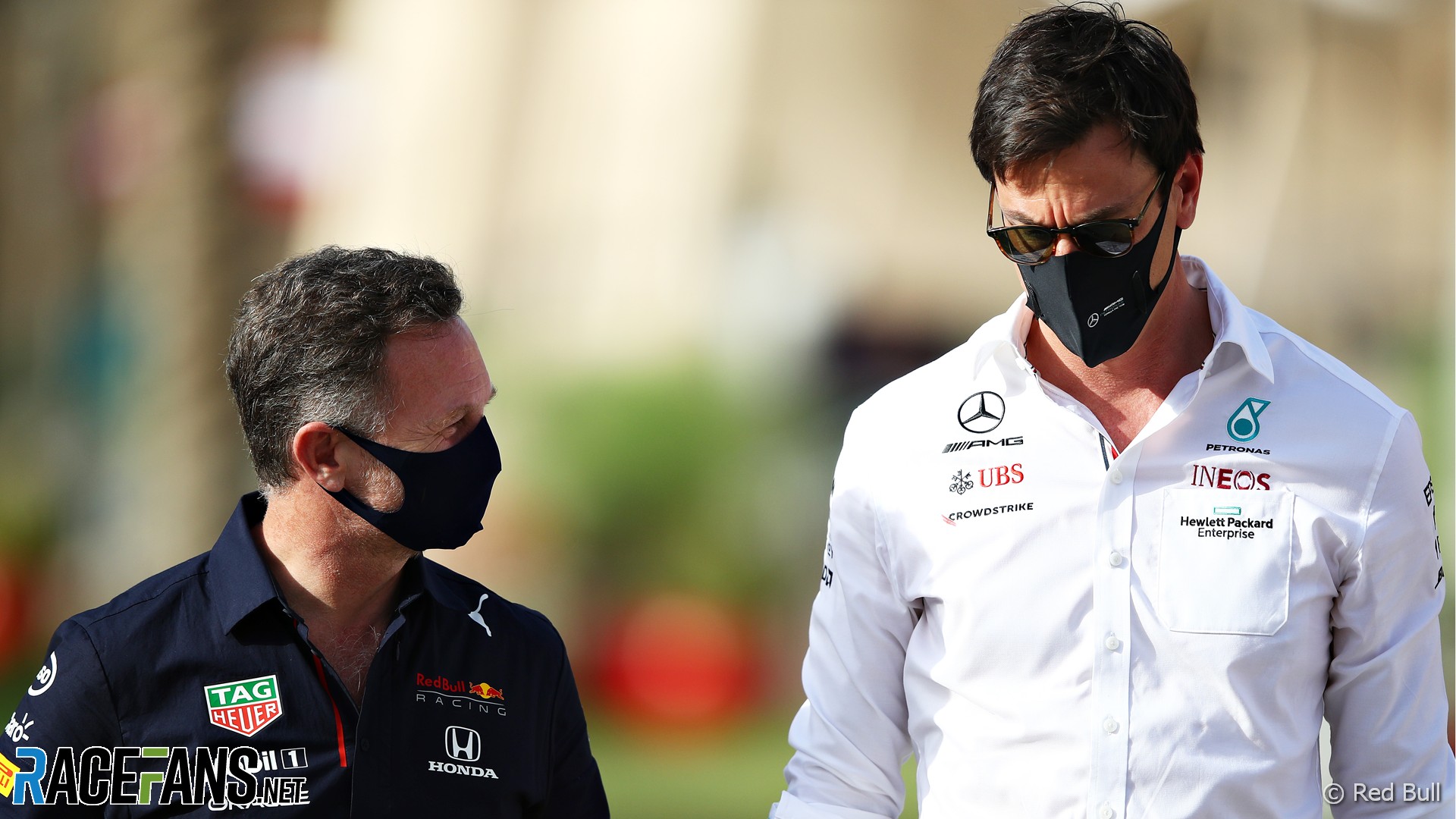 Red Bull team principal Christian Horner and his opposite number at Mercedes, Toto Wolff, are not short of grounds for disagreement these days.

Besides the controversial clash between their two drivers at last weekend’s British Grand Prix, the long-term future of Formula 1 is another subject which divides the pair.

A working group made up of representatives from current Formula 1 power unit suppliers, as well as Audi and Porsche, met in Austria to discuss how the world’s foremost motorsport should power its cars after 2025.

Mercedes were represented by Daimler CEO Ola Källenius and board member for group research and Mercedes chief operating officer Markus Schäfer – both from the automotive side of the business, rather than their Formula 1 team. However, Horner attended to represent Red Bull Powertrains directly, as a power unit supplier with no road vehicle arm.

“But I think where everybody was unified was they want something that gets cost under control, is sending the right message, delivering the right emotion. And therefore sound, for example, is extremely important or certainly was for us. And there’s various ways to be able to achieve that.

“To get the costs under control are key objectives that the group collectively will be working on because this is an engine probably not just for the for the next five-year period, it could be the next 10 years. And of course, you’ve got to look at where the automotive sector is going to be in that period and where does Formula 1 want to and need to place itself.”

F1 has always tried to link itself to road car engine development. But the technology beneath the engine cover of an F1 chassis cannot be directly transferred: Even in exceptional cases like the Mercedes AMG Project One hypercar, which claims to get as close as possible to putting a real F1 power unit into a road-legal machine, there will be some adjustments needed to make it exhaust and safety standards compliant.

But F1’s engine suppliers weren’t always original equipment manufacturers [OEMs]. The series previously attracted independent engineering companies like Cosworth, who have said they will not re-enter F1 while MGU-H is part of the hybrid system, despite developing high-end hybrid and pure electric powertrains for automakers’ road cars.

Horner, representing a supplier whose concerns for justifying spend on their powertrain department will not be based on relevance to road vehicles, said that there was potentially a conflict between automakers and the spectacle of F1. “I think the fundamental question is, where do we want Formula 1 to be?

“Where does it fall? If you follow the theory of where OEMs are going – electrification – one could say that we could end up in Formula E in eight [or] nine years’ time.

“Now, that isn’t Formula 1. Formula 1, for me, it’s about noise, it’s about entertainment, it’s about the fastest cars in the world. And I think the fact that we’re going this biofuel route and the sustainable fuels, I think that we can [show] that the combustion engine does have a future

“I think there’s no reason to think that why not introduce high-revving engines that sound fantastic, that are doing it in an environmentally friendly manner. I think the biofuel and sustainable fuels enable you to do that.”

Wolff, as part of Mercedes, sees things differently, arguing that electrification of F1’s power units should increase. “We can’t go back to a Flintstone engine,” he said. “And on the other side, going all-electric [in 2025] is too early.

“We should, nevertheless, come up with a power unit that we can be proud of, and being proud of means having still the audio-visual experience for the fans from an internal combustion engine [and] having a hybrid component that is very strong on the electrical side. So we are giving the electrical side at least equal the performance than the ICE, or more.

“In my opinion, [that’s] the transition step to something in 2030 that can be very different, depending on where the car market goes and we see some of the big auto manufacturers commit to the 2030s to be all-electric.”

OEMs and power unit suppliers are not the only companies with a vested interest in using F1 for technological development, however. Fuel firms like Shell and Petronas are necessary to fill the tanks, if F1 is to keep an internal combustion element to its powertrains and the partnership with Saudi Aramco that F1 announced in 2020 is predicated on the idea of developing sustainable fuels together.

The options, for bio- and synthetic fuels, are very different. ‘Biofuel’ refers to an increased ethanol mix in existing petrol. F1 currently mandates a road-legal blend of ethanol and petrol (in contrast to IndyCar) and as countries move to increase the percentage of ethanol used in road fuel, the series can follow that. However engines designed for petrol cannot run pure ethanol as a fuel and so developing a mix still relies on a supply of some kind of gasoline.

OEMs and fuel suppliers alike are currently investing in e-fuels or synthetic fuels. Porsche has committed to opening an e-fuels plant in Chile to become the first producer of hydrogen-to-petrol fuels. The process is relatively easy to run on a chemical level (hydrogen is combined with carbon dioxide to create synthetic methanol, which can then be refined to a synthetic petrol) but excruciatingly limited by needing hydrogen through electrolysis, powered by renewables, in order to claim carbon neutrality, which is not yet an efficient process.

Although not yet at a production stage for any mass conversion to e-fuels, Wolff argued that F1 could act as a fast-tracking ‘laboratory’ for development. “I think what we need to achieve is to be the fastest laboratory in the world to develop sustainable fuels, whether this is just bio[fuels] or whether it’s synthetic fuels or e-fuels that are available as pump fuels, because that can be a real contribution to the planet, that we develop high-performance fuels that work for us.

“If you listen to our fuel partners, what we need to achieve is not a spaceship fuel but something that the final customer can actually utilise in his own machine. And it’s not only cars that will be on the roads, but it’s also all kind of industrial applications or machines that run on fuel or kerosene that may utilise our development and our science.

“I strongly believe in that. If you look at what we have done for the NHS and with the CPAP and how quickly it went from prototype to actually being deployed on real patients, I think the speed of development and delivery in Formula 1 can make a real difference.”

While Wolff and Horner sing from the same hymn sheet on the possibilities offered by synthetic fuels, their attitudes towards the role electrification should play in the future of Formula 1 differs sharply, and poses a philosophical question which will shape the sport’s future.

95 comments on ““We can’t go back to a Flintstone engine”: The clash of visions over future F1 power units”