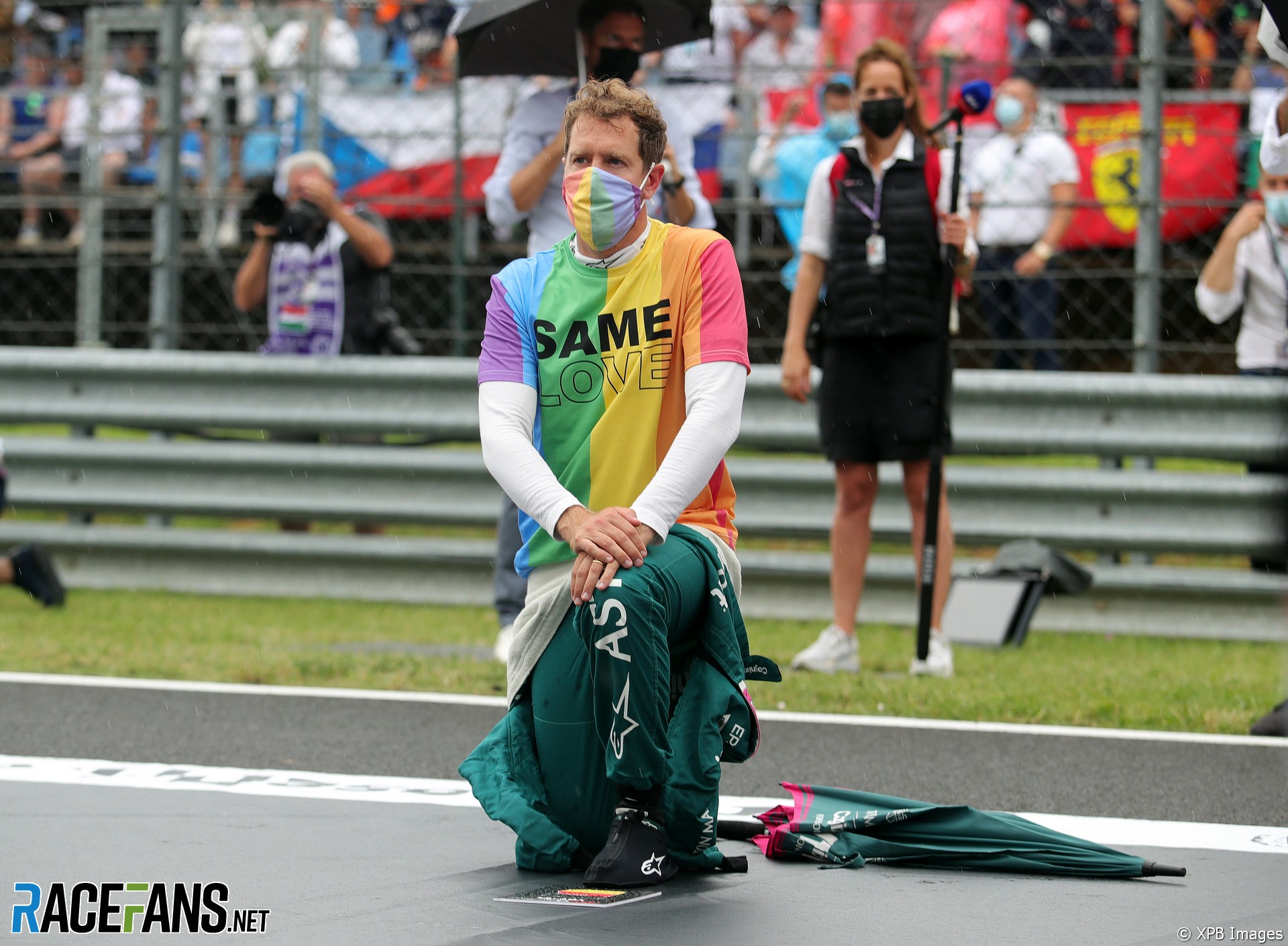 In the round-up: Sebastian Vettel was perplexed by the offence some took at the T-shirt he wore in Hungary.

Vettel wore a T-shirt with the slogan “same love” and the colours of the LGBTQ+ pride rainbow at the We Race As One moment ahead of the Hungarian Grand Prix. The Aston Martin driver, who criticised Hungary’s new law banning gay people from appearing in television programmes or educational material aimed at those under 18, was disappointed by the negative reaction it provoked from some.

“It’s disappointing that just a couple of colours in a different order make such a difference,” said Vettel. “We all stand in the rain before the race on this carpet and we have all these nice slogans and yet it seems to be a problem for some. I don’t understand. It’s a sad world, in some regards.

“If it helps for supporting those people who suffer in countries that are part of the European Union, I’m happy to express myself.”

“Esteban is such a wonderful guy, he’s just really pleasant, super respectful,” Hamilton said. “I’ve always had good rapport with him. I remember when he was in our team, watching and just trying to learn as much as he could.

“I was so happy to see him actually get a seat here and then you’re going up against two-time world champion is not easy. And he’s really taken to it like a duck to water.

“So I’m really, really proud of him and wish him much more success. Hopefully this boosts that team forwards and hopefully they’ll improve over the year and we’ll see closer racing with them.”

Following his crash in practice and elimination in Q1, Yuki Tsunoda had a poor start to the Hungarian Grand Prix weekend. He said that was adding up to his least successful event in F1 so far, until the first-lap drama shook up the order.

“It was okay in the end,” Tsunoda said. “[If it had been] like a normal race, I don’t know if I could’ve taken points or not, I would say.

“For me, it was the worst race week until the qualifying or until the race in this year. So I have to really analyse and try to work hard to find out what’s the issue and we’ll be back in Spa.”

Daniel Ricciardo said he was looking forward to a break after finishing outside the points in a joyless Hungarian Grand Prix where he suffered heaby damage from the start.

“I don’t want another race after that,” said the McLaren driver. “That was a long 70-something laps or 68, whatever it was in the end.

“I want to get away for a bit, but actually I’ve got testing, I test here on Wednesday so I’ll stay on the game for another 72 hours and then get away. It’s been a busy last few weekends, so I’ll switch off for a little bit.”

YESSS!!! Double points!!! So, so happy for every single member of this team. 2.5 years of incredibly hard work and we’re getting our reward. COMEEE ONNN @WilliamsRacing!!!

I don’t know what to write I’m lost for words, we just won the Hungarian @f1 Grand Prix i will forever remember this moment !!🔥
Thank you to @AlpineF1Team without them I would not have make it, and what a drive by the legend himself @alo_oficial he’s part of this too 🔥 #P1 pic.twitter.com/PpbyTOD4oL

The people booing @LewisHamilton are unquestionably not real race fans. These people have zero idea of the hard work and dedication to be at the top of the sport & also what he has done for it. No place for it at all… really poor 👎🏼

You’re the F1 TV director. You can either show RBR frantically repairing VER’s car – pivotal to the race & championship – or you can show drivers milling about in pitlane. Annnd…you choose to show milling about. #facepalm

"Rafael Villagomez, Victor Martins and Amaury Cordeel have been served with time penalties following today’s race three at the Hungaroring."

Alice Powell: W Series has kick-started my career again for me (Females in Motorsport)

"Powell: 'Over half a million people tuned in on Channel 4 for the Silverstone race. That’s amazing for a series that is so new. It’s a great way to showcase female talent and the younger generation of racers coming through too.'"

Another race, another red flag.

As I watched and waited for what is now the go-to response to a crash with debris, I did ponder why Bottas and Stroll didn’t attempt to keep going, on three wheels behind the Safety Car. After all we know a front suspension can be replaced in 30 minutes as Red Bull did after an incident on a lap to the grid last year. Surely it’s now worth the gamble that a red flag might allow otherwise race-ending damage to be repaired?

No doubt the teams will be considering this. It’ll be like the WEC/Le Mans soon!
Davethechicken