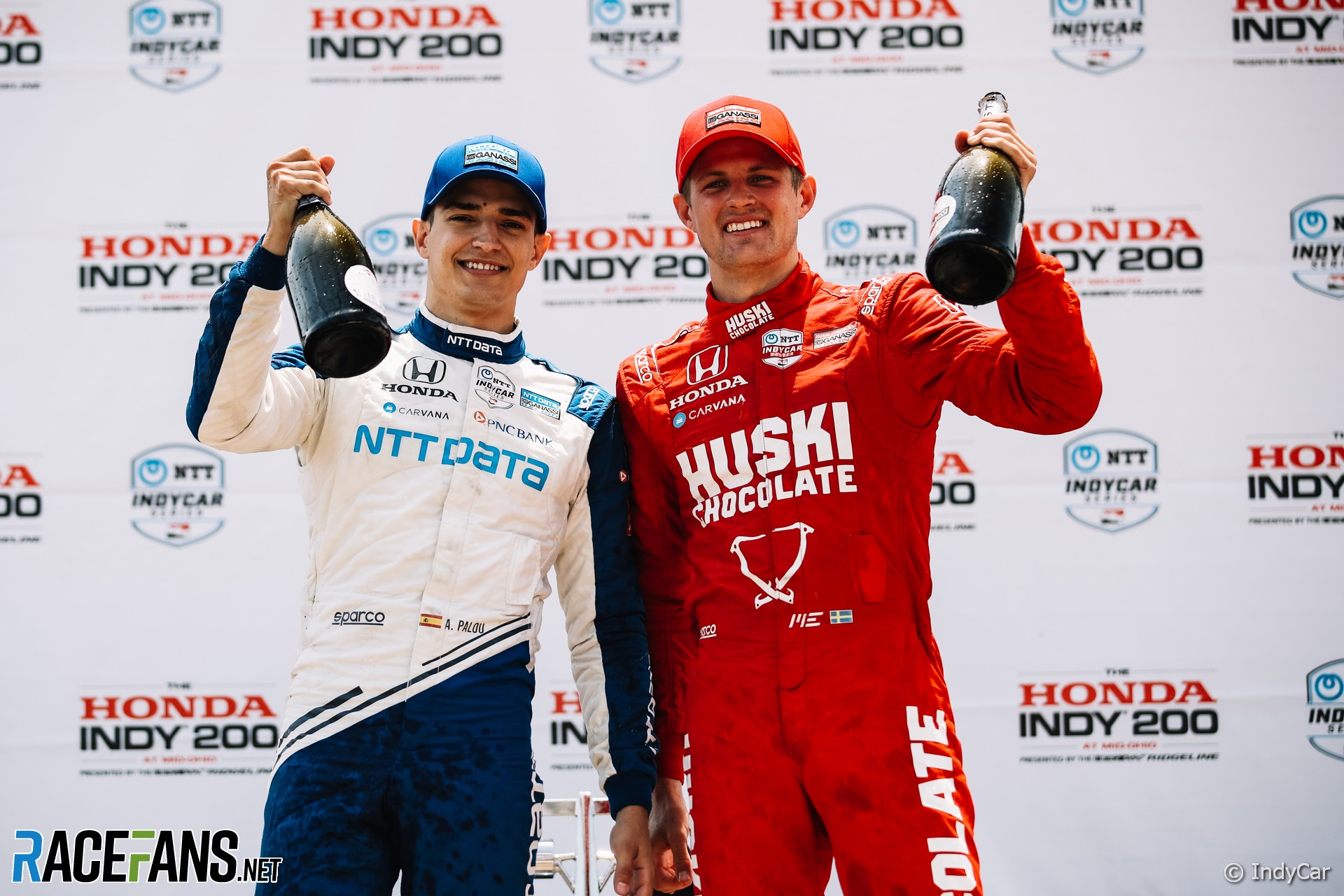 IndyCar has reached the end of a five-week summer break, conveniently timed around host broadcaster NBC’s commitments to the Summer Olympic Games in Tokyo.

This weekend’s race is the first of six in a period of eight weeks which will decide the 2021 champion. With Alex Palou and Patricio O’Ward leading the points we could well have a first-time champion come Long Beach on September 26th, but there are several other drivers in the running as well.

Between this weekend’s race on a new street circuit in Nashville, Tennessee, and Long Beach’s unfamiliar relocation to the role of season finale, this stretch also features a 500km race around the 1.25 mile Gateway Motorsports Park oval plus three permanent road course: the Indianapolis Motor Speedway Grand Prix circuit (where Rinus VeeKay won in May), Portland International Raceway, and Laguna Seca Raceway.

Per the current IndyCar Series points system, 50 points are given to the race winner, one bonus point is awarded for winning pole position, one bonus point is awarded for leading a single lap, and the driver that leads the most laps earns an additional two bonus points. The lowest theoretical score over the next six races is 30 points, as five points are given for being classified 25th or lower – and at least 25 cars will be on the grid for the remaining races, due to part-time entries.

Therefore, the theoretical maximum number of points available in the remaining races is 324. This means that every driver within 294 points of points leader and Indianapolis 500 runner-up Álex Palou is mathematically eligible to win the IndyCar Series championship. But the number of realistic championship contenders going forward is much, much smaller.

Last season, Josef Newgarden sat 117 points behind eventual champion Scott Dixon with six races left. He then won three of those remaining races to close to within 16 points of his rival – without the assistance of double points being awarded in the last race, as it was from 2015 to 2019. Currently, there are six drivers within 113 points of Palou that can be cosidered ‘realistic’ contenders.

Three of those drivers race for Chip Ganassi Racing: Alongside Palou, and defending national champion Dixon, there is outside contender Marcus Ericsson who took his first win in Detroit this year.

Newgarden’s victory at Mid-Ohio has him back in the fight as a legitimate contender, while Penske team mate Simon Pagenaud is another outside contender. Patricio O’Ward, who is second in the standings and trailing Palou by 39 points, represents the disruptor to the Ganassi-Penske duopoly, as the star driver for McLaren SP. He could become the series’ first champion from outside those two teams since Ryan Hunter-Reay grabbed the title for Andretti in 2012.

First, there’s the fringe contenders – Ericsson and Pagenaud, trailing Palou by 104 and 113 points respectively. Their slim championship hopes would require not only a run of form similar to what Newgarden experienced last season, but realistically, it would require a misstep from the four drivers in front of them.

While Pagenaud is a past champion in 2016, this year it’s Ericsson who has the stronger form in recent races – with a win at Detroit and a second place at Mid-Ohio in the last four races. Pagenaud, who is out of contract at the end of the season and seeking to impress, finished third in the Indianapolis 500, but has only managed one other top five finish all year.

The experienced hands in the top four of the championship standings are Dixon – third in the table and trailing by 56 points – and Newgarden, who is 64 points behind Palou in fourth.

Dixon won the first race of a double header at Texas Motor Speedway. His only blemish on an otherwise solid season came when he ran out of fuel early in the Indianapolis 500, which resulted in a desperate fight just to finish on the lead lap in 17th.

Remarkably, despite being just one short of AJ Foyt’s record of seven national titles, Dixon has never won back-to-back championships. But he has made two championship comebacks in the last decade. In 2013, he trailed Hélio Castroneves by 49 points with three races left – then finished in the top five in each of the remaining races to win the title by 27 points. Then there was the 2015 finale at Sonoma Raceway, where Dixon won the double-points finale to overhaul Juan Pablo Montoya on a tie-breaker after they ended the season tied on points.

Newgarden’s rash of misfortune – a first-lap crash at Barber Motorsports Park, plus the two late defeats at Detroit GP race two and Road America – seems to be over. He led 172 of the last 205 laps over three races and this weekend races just 30 kilometres outside of his childhood home in Hendersonville, Tennessee.

Even better for him, two of the other remaining five venues – Gateway and the Indy GP circuit – are places that Newgarden won in the second half of 2020. He has a smaller deficit to overcome than he did at this stage last season, and a similar flourish to end 2021 would surely give Newgarden his third championship in five seasons since joining Team Penske in 2017. That would put him in elite company alongside three-time national champions Rick Mears, Al Unser Snr, Bobby Rahal, and Sam Hornish Jnr.

One advantage that O’Ward has over Palou is experience on some of the upcoming courses during his time in Indy Lights, Indy Pro 2000, and a partial season in 2019 with Carlin. Palou raced in Europe and Japan prior to joining IndyCar in 2020, and tracks like Long Beach, Laguna Seca, and Portland were all shelved due to the Covid-19 outbreak last season. On the other hand, Palou is driving for a Ganassi team that has won 13 national championships between IndyCar and the CART series of yesteryear, while McLaren SP and their predecessors have never won a national title.

Moreover, since his dazzling come-from-behind win at the second Detroit race, O’Ward has lost 40 points in the last two races to Palou. After qualifying in Mid-Ohio, O’Ward’s frustration in qualifying began to show. Although he has taken two pole positions this season, he’s only qualified inside the top six on merit three times, leaving him with more work to do on race days.

It’s part of what has made O’Ward’s come-from behind wins at Detroit and at the second race in Texas so impressive. But to rely on fighting through the pack every week is unsustainable over a championship stretch – especially when Palou is qualifying, on average, upwards of three positions better than O’Ward this season.

With a 100 percent podium record on road courses and a vast improvement in results on ovals, street circuits represent Palou’s last area of opportunity to improve. He finished 17th at St. Petersburg and 15th in the first race at Detroit (after starting 25th due to a grid penalty), but his subsequent podium in the second Detroit race suggests that he’s already getting the hang of the discipline.

O’Ward had a tough race at St. Petersburg (19th), but he also had a curiously anonymous race at the Indy GP in May (15th) following his maiden win at Texas.

Otherwise, there’s not much else that remains to separate the pair at the top of the points. Both drivers have two wins, at least four podiums (with Palou on six), eight top-tens each, and they’ve completed all but one lap in the first ten races. As he explained after the race in Mid-Ohio, Palou has a straightforward vision on the rest of the season: “We’re going to win this championship just by being here every weekend, and getting some more wins.”

But nothing is ever as simple or straightforward in an IndyCar championship fight where all three of the series’ core disciplines will be showcased over six races in an eight-week span. Since the unification of IndyCar and Champ Car in 2008, the championship has been decided in the final round every year – and it’s very likely that we’ll see another great championship climax by the end of this season too.

7 comments on “Will IndyCar get a new champion? The surprise contenders as final leg begins”