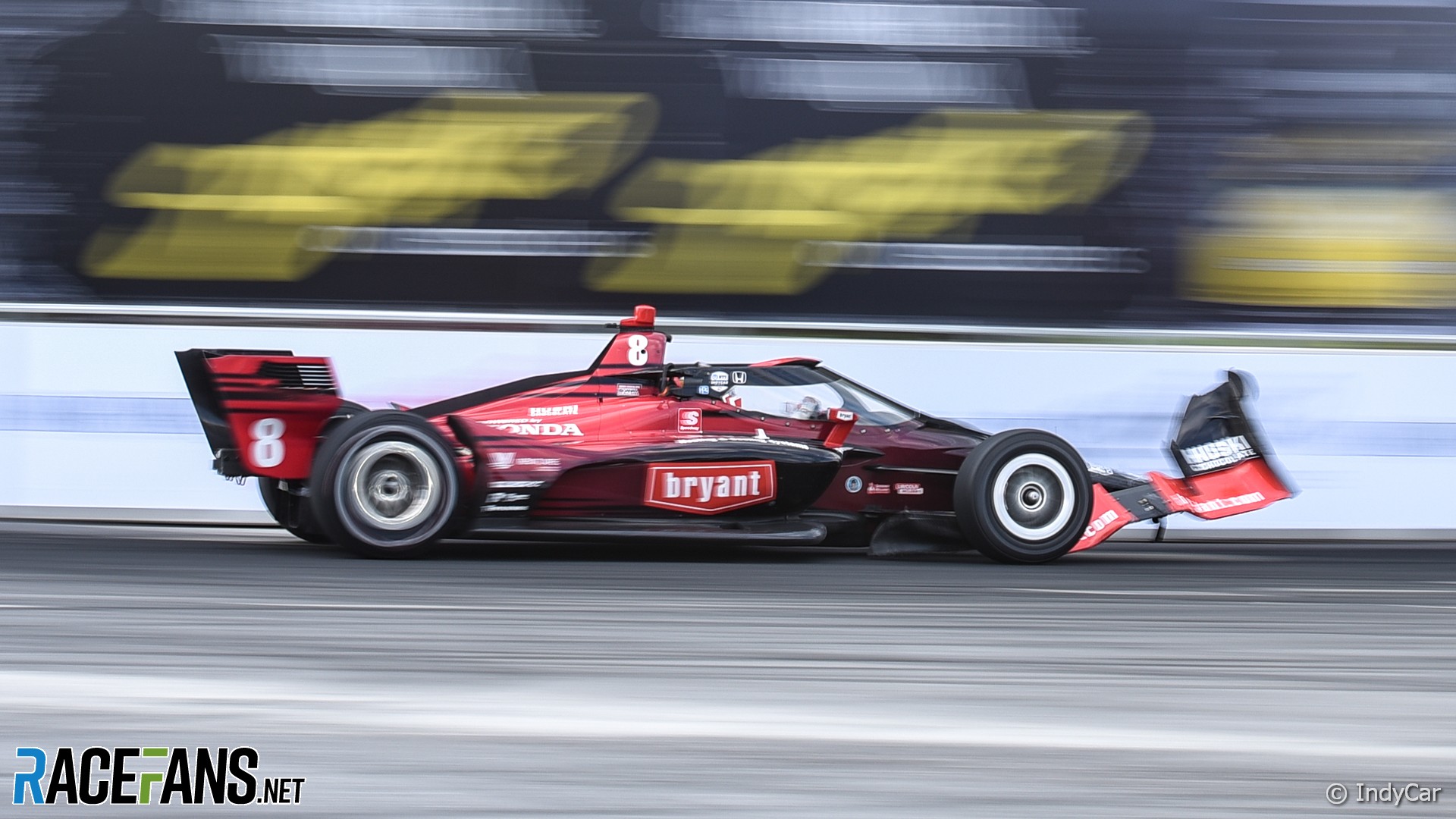 “I’m just trying to figure out how I ended up winning the race after flying and seeing the sky on lap five, and thinking my race was over,” laughed Marcus Ericsson after Sunday’s Music City Grand Prix in Nashville.

Thousands watching the race in the stands and many more watching from their homes around the world were left wondering the same.

Ericsson qualified a lacklustre 18th place on Saturday, but by the time Dalton Kellett’s stranded car brought out the first caution on lap two, he had made up three positions. That left him behind Sebastien Bourdais for the restart on lap four.

But before either car even got to turn 11, Bourdais had to slow down to avoid hitting the pack of cars in front of him. Ericsson reacted just a split second too late, sending his black and red number eight Dallara/Honda skyward over the rear of Bourdais’ car.

“I thought my race was over there,” said Ericsson.

He was lucky on several counts. First that the crash wasn’t far worse, as his car flew perilously close to the catch fences lining Russell Street between turns ten and eleven. Once his Ganassi aeroplane touched down, he was fortunate again to be able to drive his car, with his entire nose assembly dangling off, back to the pits as the second full course caution was called, with no terminal suspension damage.

That didn’t mean Ericsson got away completely unscathed. “We got some damage on the right front suspension, on the floor, and some other parts of the car,” he explained. “I could feel in the left-hand corners the car was better than in the right-hand corners because of the hit on the right-hand side.” Luckily (again) for Ericsson, the Nashville circuit’s anticlockwise configuration mitigated the loss of speed through the right turns.

Ericsson was sent to the tail end of the lead lap for pitting while pit lane was closed, but that first penalty was made redundant when he was given a subsequent stop and go penalty for avoidable contact with Bourdais – who retired from the damage that he sustained in the incident.

When told of Ericsson’s immediate comment that Bourdais had slowed down in front of him on the restart, an incensed Bourdais said: “I won’t go even there because I don’t want to be a douche, but if that’s his answer then he needs to fricking get a real good, hard look at [the incident].”

“Everybody was trying to catch up, catch up, catch up – we caught the tail of the back and then all of a sudden it goes like first, second gear speed and obviously [he] flew over our car. Yeah, I stopped – because the cars were stopping in front of me,” exclaimed Bourdais.

Ericsson accepted the blame. “I want to apologise to Seb there at the start [in] the accident,” he said after the race. “I thought it was green, and I went. I couldn’t see that he stopped. I’m really sorry for that.”

At this stage, Ericsson’s fringe chances of competing for the championship late in the season appeared to be over. Following the penalty, he was 25th and last of the cars that were on the lead lap. But being on the lead lap after the penalty was crucial to his comeback, even if the thought of winning seemed impossible.

“I thought I would try and recover as many positions as possible and have a solid, what, top 15? [That] was sort of my game plan after that incident.”

Ericsson got the help that he needed in the form of another full course caution on lap 16, for contact between Scott McLaughlin and Ed Jones. That was followed by the first red flag on lap 20 for a multi-car pile up at turn 11. By lap 24, Ericsson had climbed back into the top 10. And he’d already changed over from the primary to the alternate compound tyres on lap seven.

But the real game changer for Ericsson’s race came when Rinus VeeKay crashed at turn one, causing another caution on lap 31. The nine cars in front of the Ganassi driver came in at that point to make their first routine pit stops. And so after three pit stops, two penalties, and the small matter of being launched three metres into the air off the back of another car, Ericsson had taken the lead by lap 33. Though not without more controversy, as former leader Colton Herta protested that he crossed the pit exit line ahead of Ericsson (he ultimately took the restart of the race in third, behind Ericsson and Ryan Hunter-Reay).

During the sixth full-course caution – caused by contact between McLaughlin, Kellett, and Will Power and prolonged by a water spillage at turn three – Ericsson made his second stop on lap 46, changing to a new set of alternate tyres. The race restarted, but a collision between Alexander Rossi and Patricio O’Ward brought out the seventh caution, where Herta made his last pit stop on lap 53. After the eighth caution (single-car accident for rookie Cody Ware), Ericsson was back in the lead, with Herta down in sixth.

Thanks to some well-timed overtakes and fresh primary compound tyres, Herta quickly moved past Felix Rosenqvist, then Andretti Autosport team mates Hunter-Reay and James Hinchcliffe, then overtook Scott Dixon for second. It appeared that a pass for the lead was going to be a formality.

But while Herta was much faster through the tight corners, Ericsson’s low-downforce set-up helped him pull away down the Korean War Veterans Memorial Bridge, making Herta use much more of his push-to-pass allotment than he expected just to keep up. After a dozen laps of constant pressure from the 21-year-old, Ericsson’s closest challenger faded when Herta locked up into the tricky turn nine with 12 laps to go. Five laps from home, Herta’s bid for victory ended when he crashed at that same corner, bringing out the ninth caution, and eventually a second red flag.

Suddenly, Ericsson was in the same position Will Power was in when he lost the first race at Detroit, leading the pack, but vulnerable on the eve of a two lap sprint to the finish. Especially with 51-time race winner and six-time champion Dixon right behind him. But Ericsson got a great restart, his slippery car was able to pull away on the straights, and Dixon’s tyres just didn’t have enough life in them to make a serious push for the win.

“It just shows in IndyCar anything can happen. You can never give up. And if you have a good team and a good car, you can still get to victory lane,” remarked Ericsson after one of the strangest afternoons in recent memory.

That he won from the ninth row of the grid at a circuit where overtaking for top positions proved difficult, was remarkable enough. That he did it after going airborne just five laps into the race, makes this one of the most unlikely IndyCar victories of all time – right up there with Danny Sullivan’s “spin and win” at the 1985 Indianapolis 500, or Dan Wheldon dive past JR Hildebrand’s wrecked car in sight of the flag in 2011.