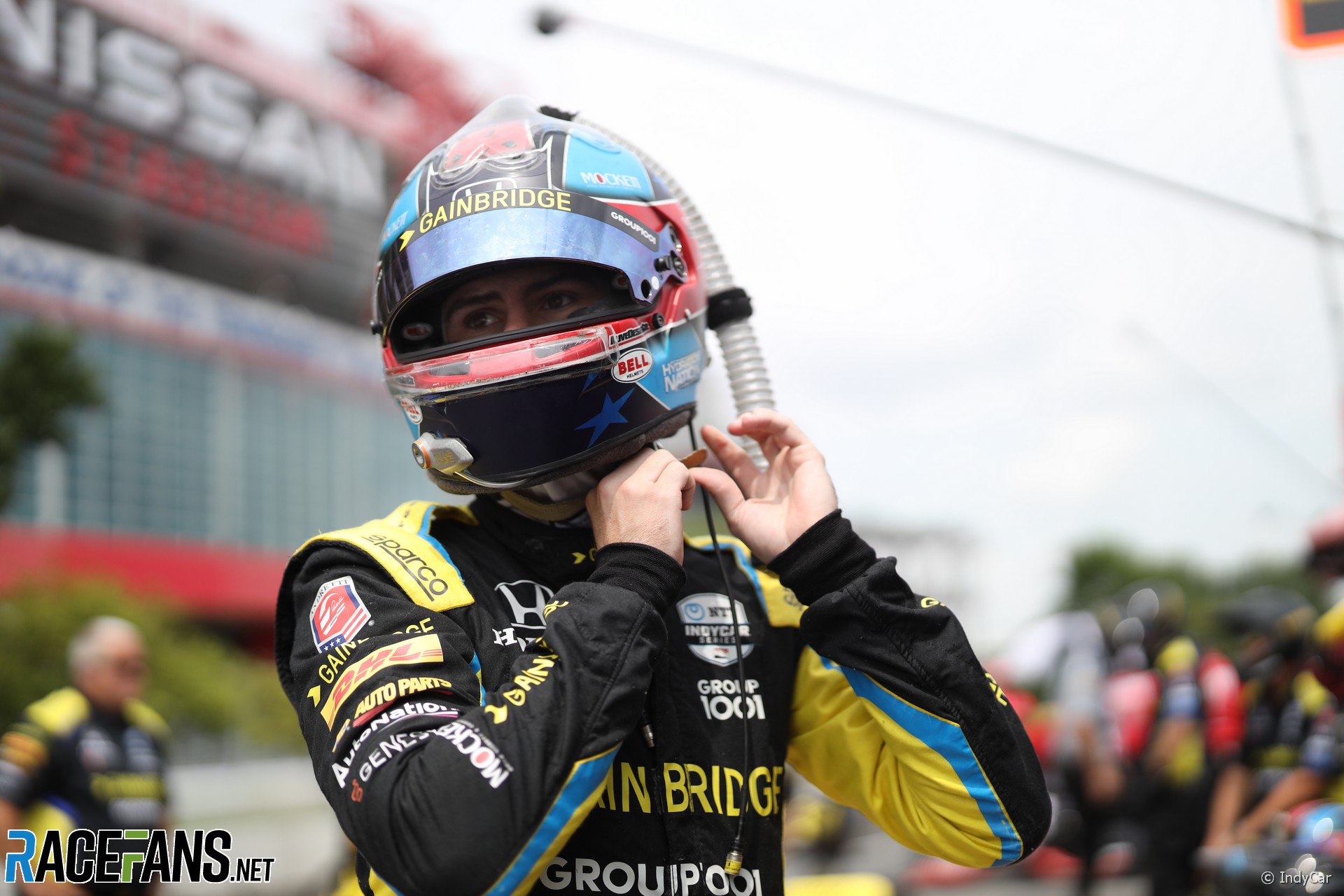 Colton Herta dominated proceedings throughout much of last weekend’s race in Nashville, but crashed out with five laps to go while chasing eventual winner Marcus Ericsson.

Having been the fastest driver in both practice sessions and taking pole position by an overwhelming margin, Herta led more laps than any other driver on Sunday. But after losing the lead to Ericsson, Herta was pressing his rival when he took too much speed into turn nine and smashed into a concrete wall.

Herta summed up what happened as “tunnel vision, man.”

“I feel terrible,” he told NBC after the race. “We had the car all weekend to win, and I just…threw it away. I feel really bad. I’m okay, though.”

His crash was the last in a race which saw a total of nine caution periods and two red flags.

“This place is brutal,” said Herta. “Congrats to Marcus, he drove a hell of a race at the end. I didn’t think he was going to make it, and he just kept pulling away from me. So, good job to him.

“I just feel terrible for the team, and everybody involved… it was just terrible on my part.”

Herta led 39 of the 80 laps. Prior to his crash, the Andretti driver had fallen to sixth, but within six laps, he had overtaken Felix Rosenqvist, James Hinchcliffe, Ryan Hunter-Reay and Scott Dixon to close within a second of Ericsson.

The Ganassi driver had made his final routine pit stop seven laps before Herta. “I knew he had to save fuel, I didn’t quite know how close it was going to be,” Herta said. “I thought he was going to make it. I wasn’t sure if he was going to have to make a big fuel number, or just keep going how he was.

“I was just pushing to try to get ahead of him, as soon as I could… and I just overdid it.”

Herta has already locked up at turn nine a few laps earlier, costing him a second in his pursuit of Ericsson. He was less fortunate when he snatched his brakes at the same corner again, striking the wall hard.

There was concern when television replays showed that Herta was unable to take his hands off the steering wheel before the moment of impact. While he did show visible signs of concern about his hands after getting out of the car, he gave assurance that he was uninjured. “I know I didn’t get my hands off the wheel, but they’re okay.”

Despite the result, Herta praised IndyCar’s newest street course and the 70,000 fans that packed the grandstands and lined the streets to watch the inaugural Music City Grand Prix.

“I had fun, and thanks to everybody for showing up. It was amazing – even with the Covid restrictions, the place sold out so quickly. Everyone did such a fantastic job putting on this race. I couldn’t be more proud of the city for showing up for it, and everyone for watching at home, for everybody… for sticking with us through all those yellows and stuff.”

Herta, who was classified 19th, said he goes to this weekend’s race at the Indianapolis Motor Speedway road course looking for “redemption”.

“I had a good car at the Indy GP [in May], so hopefully we can make something happen there.”