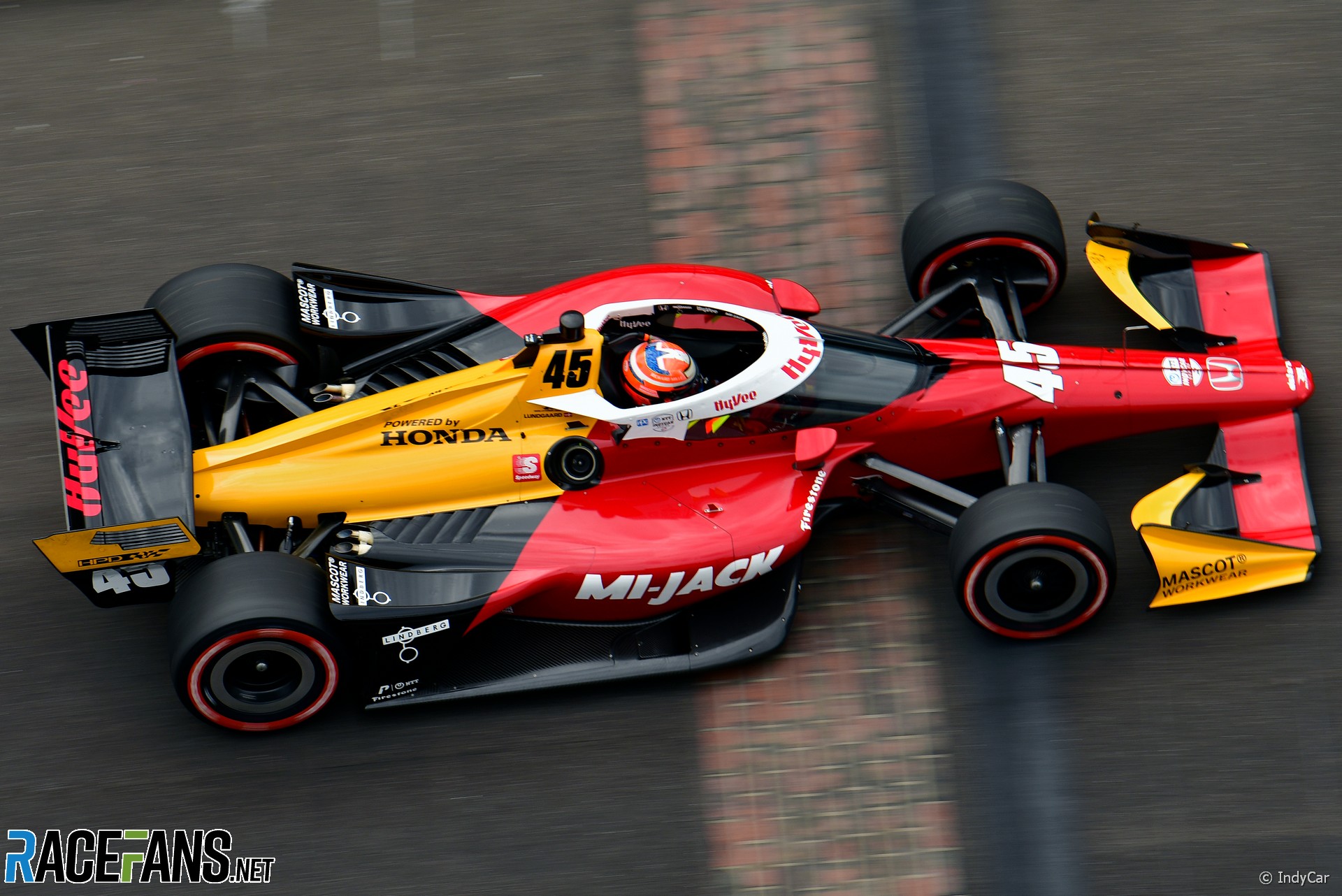 Not even an overnight battle with food poisoning could dampen the spirits of Danish driver Christian Lundgaard after his first IndyCar race weekend, even if he did look physically exhausted following Saturday afternoon’s race at the Indianapolis Motor Speedway road course.

It was entirely understandable, given that he’d only slept two hours the previous night due to his ailments, and then he had spent the exact same duration of time driving a 750 horsepower single-seater with no power steering in the longest race of his auto racing career to date.

There was a genuine joy that Lundgaard carried with him after finishing his first IndyCar race in 12th place, which included leading two laps early in the race. “I think this weekend has been amazing. I’ve enjoyed every second of it,” said the 20-year-old Dane.

A member of the Alpine Academy programme, and a highly rated driver prospect in the FIA Formula 2 Championship, there was a hunch that Lundgaard would be shopping himself around for racing opportunities outside of the F1 paddock when he turned up at Barber Motorsports Park for a test on 26 July. Sure enough last week Lundgaard’s IndyCar debut at Indianapolis with RLL was confirmed, with the blessing of Alpine.

Lundgaard’s appointment to the 45 car was somewhat ironic, considering that the last active Formula 2 driver to get an IndyCar race seat had just vacated that same car after five races and four top-ten finishes this season. Then again, Lundgaard enters IndyCar under more amicable circumstances than his predecessor, Santino Ferrucci – who hadn’t burned his bridges in F2 when he first appeared at the 2018 Detroit Grand Prix, but had completely incinerated them by the time he came back three months later, at Portland.

Lundgaard finished his first practice with the seventh fastest time. In qualifying, he progressed to the Fast 12 pole shootout, and qualified an astonishing fourth place. The speed was there all throughout Friday.

“Qualifying itself, to be in the top five out of 28 cars wasn’t expected. I think it put us in a good position for the race,” said Lundgaard.

This was a driver who was clearly more prepared for his first IndyCar start than his countryman Kevin Magnussen, who hadn’t driven an IndyCar before being tabbed to replace an injured Felix Rosenqvist at Road America, and had to acclimate to the series at a slower pace.

As the first quarter of the race progressed, Lundgaard ran inside the top five during his first stint on the softer alternate compound tyres. When pole sitter Patricio O’Ward pitted from the lead on lap 16, Lundgaard was able to cycle to the front of the field for two laps, before making his first routine pit stop of the day on lap 18.

“Coming out [of the pits] and leading the race at some point, was amazing. But it was all about just not doing mistakes, having a clean race, and getting through it. I’d rather get to do 85 laps, instead of just 60, or so on. The mileage was important. To get the experience of a full race… we got through it – and it was tough. It was a long two hours.”

After a strong first stint, Lundgaard dropped out of the top ten during his one stint on the primary compound tyres. The caution for Álex Palou’s engine failure withdrew with fifteen laps remaining, setting Lundgaard up for a restart with four-time champion Sebastien Bourdais bearing down on him for 15th place. “I wasn’t expecting a caution at the end, I was quite low on push-to-pass at that point. I was a bit lucky with Bourdais, he had 115 seconds, or something like that, with 10 laps to go. So I knew that he would have gotten me anyway.”

Instead, Bourdais made contact with Ryan Hunter-Reay as he tried to move up to 14th, which allowed Lundgaard to pass both of them as they ran off course. Lundgaard gained two more places over the final ten laps, getting past both Scott Dixon and Simon Pagenaud, as they struggled to maintain pace on the primary compound tyres.

“I’m happy, I got the experience. So, now I’ll go home, well-rested, and with a good experience from America,” said Lundgaard.

A return appearance hasn’t been confirmed by Lundgaard or RLL. But if he were to return this season, the only free weekend on Lundgaard’s calendar would be the weekend of 19 September at Laguna Seca Raceway. As for 2022, Lundgaard’s strong performance certainly has him earmarked as a potential candidate to go full-time in IndyCar next season, especially as RLL have been debating whether or not to enter the number 45 car on a full-time basis in 2022.

Regarding the inevitable question about tackling oval racing, Lundgaard told Nathan Brown of the Indianapolis Star that it’s something he “would like to try at some point,” but admitted, “at the moment, it’s not my target, but maybe something [to try] in the future.” Not a firm refusal, but not an affirmation that he wants to tackle a whole new sub-discipline of racing right now.

But even if it means a team having to find a ‘ringer’ to do the ovals, it may be worth bringing in Lundgaard for next season. Road and street courses will still comprise the bulk of the 2022 IndyCar schedule, and he’s already demonstrated competitive form despite being in less than 100 percent physical condition on his first weekend on the job.

For Lundgaard, a change of scenery would serve him well. He finds himself shuffled behind fellow Alpine Academy members Oscar Piastri and Guanyu Zhou, due in part to the reliability problems which have compromised his first two F2 campaigns.

This weekend was a more reflective demonstration of Lundgaard’s potential as a driver, against more professional competition. Under challenging circumstances he gave a good account of himself.