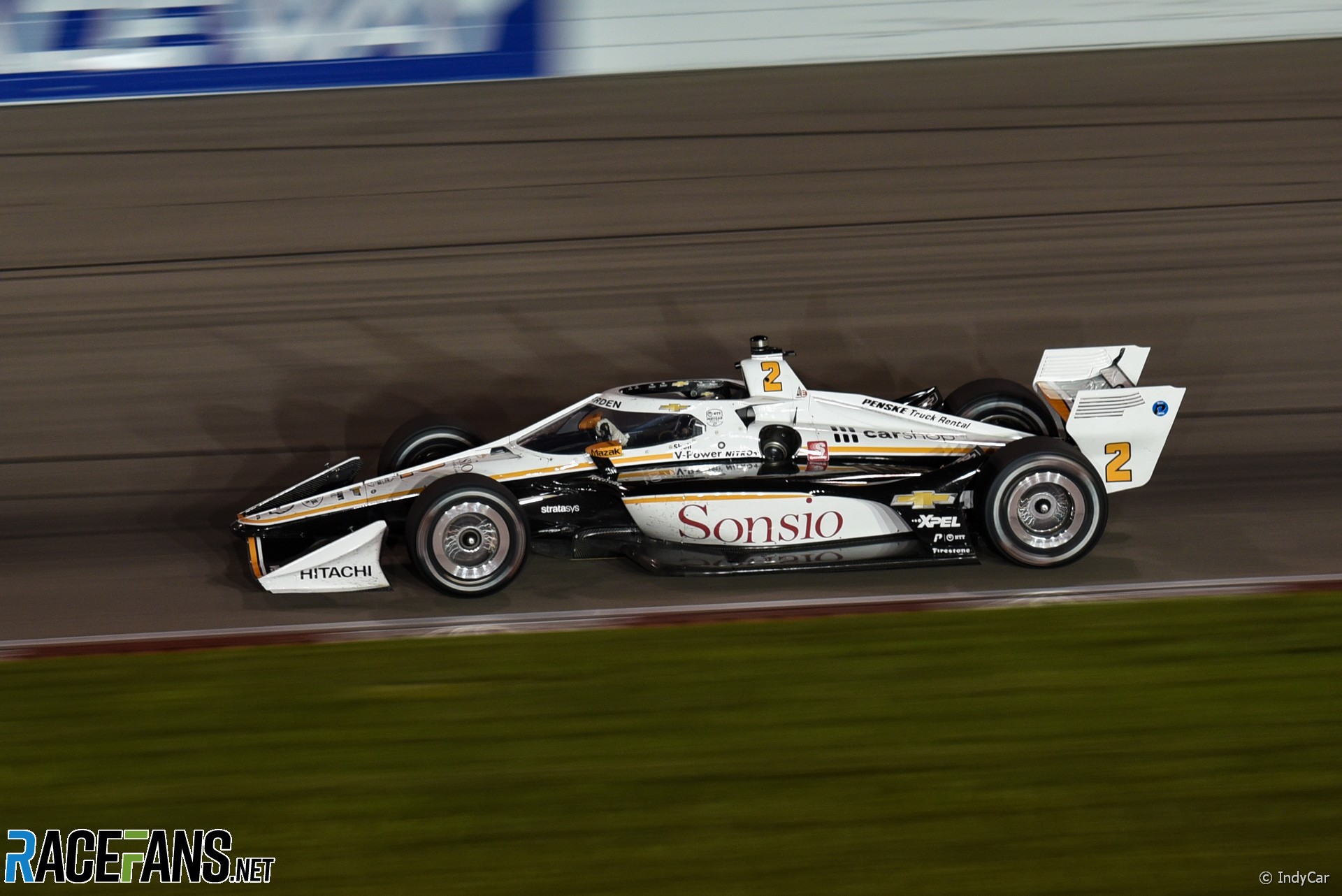 Josef Newgarden withstood a collision with his own Penske team mate Simon Pagenaud, and survived a race of attrition to win Saturday night’s 500 kilometre race at the Gateway Motorsports Park oval near St. Louis, Missouri. Newgarden finished ahead of new IndyCar Series points leader, Patricio O’Ward, who now leads the championship by ten points – after previous leader Álex Palou was caught up in a multi-car accident that also took out his Ganassi team mate and title contender Scott Dixon.

The crash that took Palou and Dixon out of the race occurred on lap 65, when Rinus VeeKay made contact with Dixon in turn one, and then collected Palou as they spun and hit the wall. Dixon would return to the course to run a few more laps before retiring. He was classified 19th, with Palou 20th, and VeeKay 21st. In the ensuing caution period, Josef Newgarden, who had a great first pit stop on lap 58, took the lead for the first time.

Newgarden would then hold the advantage until lap 139, when he was overtaken by Colton Herta. Herta had taken the lead just two laps into the race when he passed pole sitter Will Power, and was eager to claim his first career IndyCar victory on an oval. But just as he took his third and final routine pit stop of the day, his #26 Andretti Autosport Dallara/Honda suffered a driveshaft failure exiting his pit box, leading to another unfortunate late race retirement for Herta in a race where he was contending for victory.

Only O’Ward posed a threat to Newgarden’s lead in the final laps of the race. But despite a late rally from the #5 McLaren SP Dallara/Chevrolet of O’Ward, the #2 Penske of Newgarden had more than enough pace to hold on for the win, by just over half a second.

Newgarden’s victory was another massive boost for his own aspirations of winning his third IndyCar Series title, as he now sits third in the table, 22 points behind runner-up finisher O’Ward, and 12 points behind Palou, who dropped to second in the standings. This is Newgarden’s second victory in the last four races, his third career win at the asymmetrical 2.012 kilometre oval, and his 20th career win.

Power would end the day in third place, ahead of his rookie team mate Scott McLaughlin in fourth, who scored his best finish since the Texas Motor Speedway doubleheader in May. Simon Pagenaud finished eighth, but he may feel aggrieved towards Newgarden after a collision on lap 17 where the two Penske team mates clashed wheels through turn one. This resulted in Pagenaud losing his front wing – the endplate actually struck the aeroscreen of Felix Rosenqvist’s car – and sent the Frenchman down a lap. He would then spend the rest of the race trying to get back on the lead lap.

Sébastien Bourdais matched his best finish of the season in fifth, Takuma Sato finished in sixth, and Ryan Hunter-Reay finished seventh ahead of Pagenaud. Marcus Ericsson finished ninth to move within 60 points of O’Ward, and Jack Harvey completed the top ten.

Romain Grosjean finished a lap down in 14th, but ran solidly in the top ten for a good portion of the race – showing no hesitation to make aggressive, calculated passes for position in his much-anticipated oval racing debut.

Along with the multi-car crash on lap 65, there were other incidents to note: Ed Jones and Graham Rahal crashed out of the race after just three laps, and during this caution, Dalton Kellett was hit from behind by Ed Carpenter when Kellett checked up in front of him. Carpenter would later crash out on his own on lap 56, while Kellett would recover to finish in 12th, his best result of the season.

Alexander Rossi, who was contending for a podium finish, washed off the racing line and crashed exiting turn two on lap 201. Felix Rosenqvist retired with a mechanical failure on lap 211. And James Hinchcliffe finished seventeen laps down after starting the race from pit lane due to an electrical issue before the green flag was unfurled.

The IndyCar Series takes a two week break before a three race stretch along America’s west coast to end the season – beginning on 12 September at Portland International Raceway.