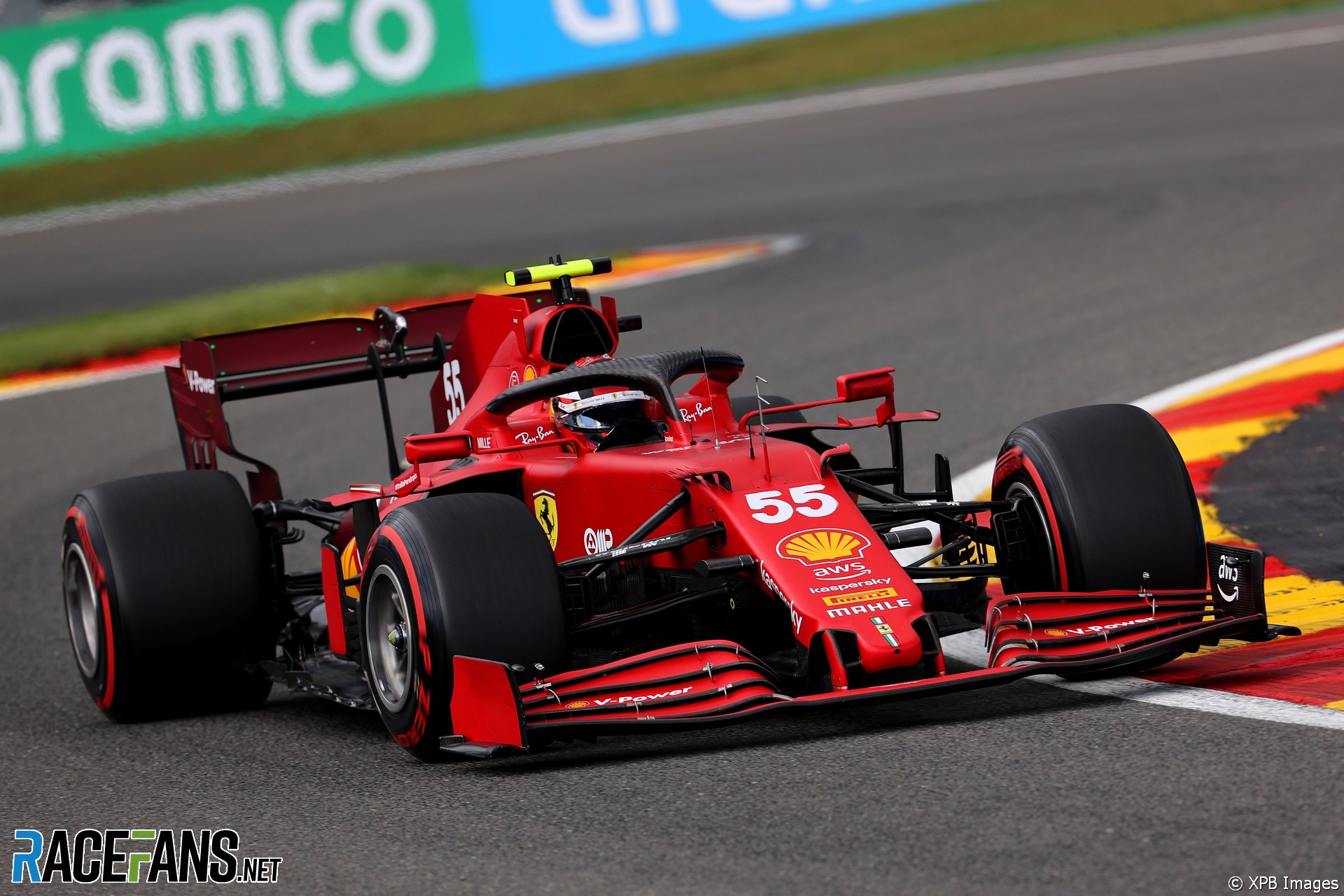 In the round-up: Carlos Sainz Jnr says there’s more time to come from his Ferrari once they cure its “strange” handling.

Sainz was 11th fastest finish in second practice at Spa-Francorchamps but believes there is more time to come from his car.

“At the moment we are on the verge of the top 10, which is not at the level that we were in Hungary or Silverstone, for example,” said Sainz.

“But at the same time, I feel like the car today felt quite a bit strange and there’s quite a bit of time to come from nailing a good set up for tomorrow and and improving it. So not great, but I also feel like there’s good potential.”

Russell: returning to F1 “like a duck to water” after break

George Russell said he was surprised how easy it was to climb back into an F1 car after the summer break.

“I’m happy to be back,” said Russell. “It’s been four weeks since I last drove the car. It felt like we got straight back into it, it’s weird how you can just jump in and you feel like a duck to water and it’s about as good.

“But [there’s] a lot to improve overnight, I think we’re a little bit off the pace. I’ve got some ideas up my sleeve so we just need to go over that. It’s always a compromise, there’s never anything that just gives you performance. But definitely going to have some interesting conversations to see what direction we go in.”

Jack Doohan took his first Formula 3 pole position in a qualifying session run in mixed conditions. Doohan, who is currently second in the F3 standings but a distant 59 points away from leader Dennis Hauger, will start from 12th for tomorrow’s first race, run with a partial reverse-grid.

The session had started relatively dry and Doohan set his pole lap in the opening five minutes, under pressure to get a time in before the rain arrived in earnest. “It was, at one point, maybe the only lap we were going to get with the conditions as they were,” he said.

“You want to go as quick as you can, but you don’t want to ruin the lap because the conditions might get wetter and then you can’t get a banker lap in.

“I had quite a big moment up into the braking zone at Les Combes when both wheels locked but other than that it was quite calm and collected and luckily my sector two was quite mega which then enabled me to have a good gap to the rest of field.”

W Series qualifying was marred by a six-car crash up Eau Rouge-Raidillon, when drivers first went to set fast laps. However, points leader Jamie Chadwick was able to stay ahead of the majority of the field by nearly a second, beating title rival Alice Powell to pole by 0.721s.

“I’m really pleased with how qualifying went,” Chadwick said. “However, the red flag at the beginning, after quite a scary accident, was a worry. Of course, all the other drivers and I are just hoping that those involved are okay.

“Qualification was difficult with the conditions. Some parts of the track were raining and then some were bone dry. Weather like that is quite challenging to manage and you cannot make a mistake. It was tricky at the start of the session when the rain was falling, but when we got going again after the red flag I started to get some proper laps in.

“Anything could happen tomorrow, as we’ve seen with the weather at Spa before, so I have to be quick to react. But I’m just happy to be starting in the front row and I don’t mind if it is a wet or dry race tomorrow.”

Thank you all for your messages❤️ that was a very scary one but I think I had an angel on my shoulder, I’m very sore but luckily I have no fractures🙏 pic.twitter.com/j2AyJzav80

Remembering our teammate and friend, Kim Cole who sadly passed away this month.

Kim worked in our Composite Laminating team for over 20 years and our heartfelt condolences go to his family and friends at this time.

In his honour, we will carry Kim's name on both cars this week.

Doing a lap of @CMCZtweets it’s just amazing what has been done here. @F1 is going to love this. See you all next week. pic.twitter.com/cfA4JWh9Q5

Esteban Ocon: ‘I was young but didn’t have the right to fail, I had to succeed’ (The Guardian)

"'They were the biggest supporters of my career but that is too small of a word,' he says now after reaching a race-winning pinnacle that was a distant ambition back then. 'They sacrificed their own life and put it to one side for me to be able to chase my dream.'"

"This e-learning platform consists of a 30-minute tutorial during which participants learn what constitutes competition manipulation, how to identify the behavior of competition fixers, become informed of their obligations and duty to report, and learn about the serious consequences arising from breaches of regulations. After having completed the tutorial, each participant will receive an FIA certificate."

"Colombo: 'What happened in Hungary needs to be repeated and bettered in the coming events. In qualifying, I repeated my result and tomorrow we will fully send it. When you start from the front, the goal is to maximise your performance and result, and I think I did that pretty well on track in Hungary.'"

After another serious crash at Raidillon, Rowmk9 looks at the tricky question of what can be done to avoid complacency on decreasing the risks there.

I like the older circuits with their challenging layouts and agree with the idea that mistakes should be punished, but I’m also uncomfortable with how many serious crashes are happening on this section of track.

I don’t want them to tame the corner, but maybe the run off needs to be deeper, and the return of gravel up there maybe? I think they’re renewing the circuit soon so probably are addressing it.

That said, I’m not sure there is a perfect solution but I think the option of doing nothing and waiting for the next fatal accident is not the right one.
Rowmk9