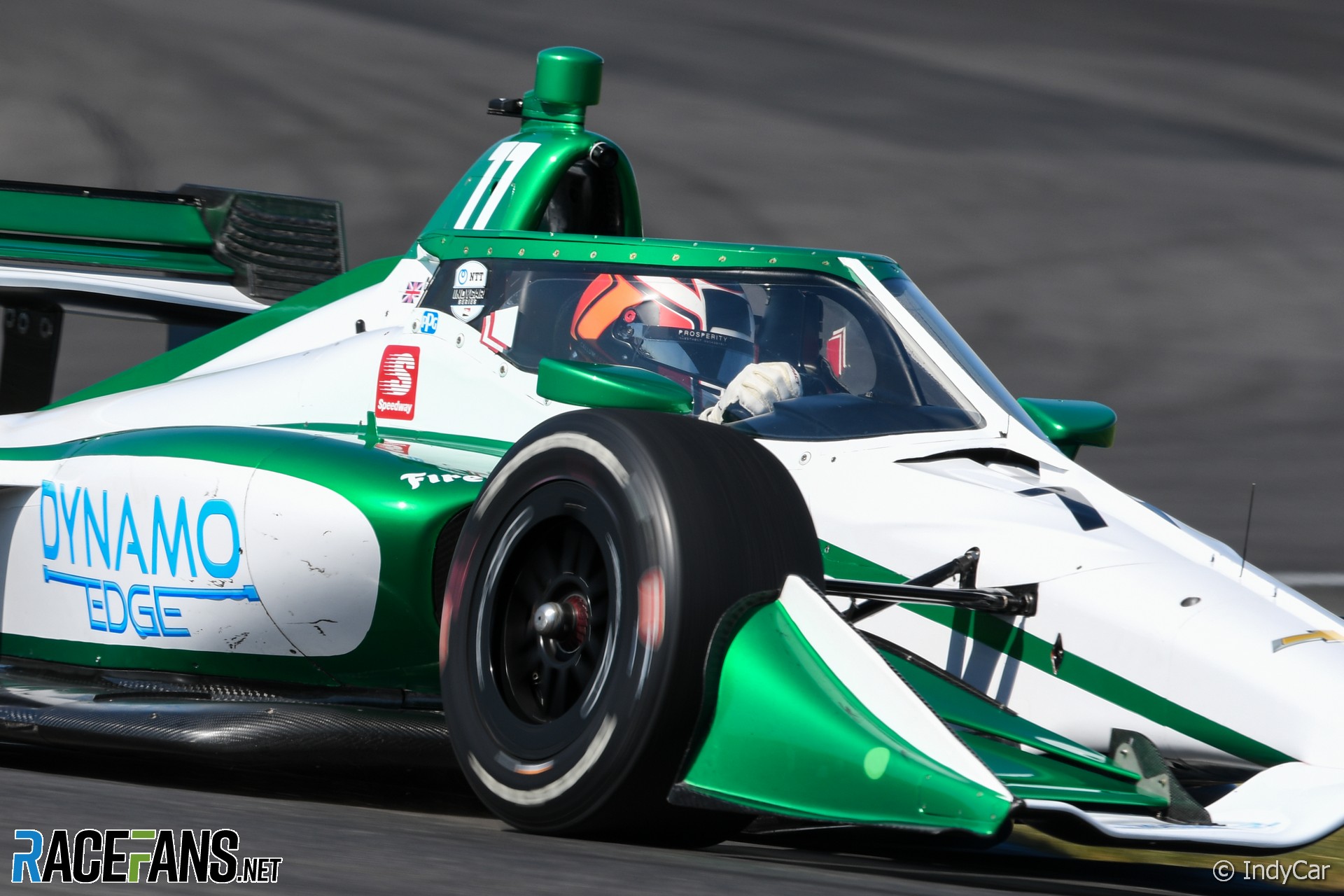 The 2020 Formula 2 runner-up will make his debut in the series for the team at the Portland road course next week.

The Juncos Hollinger-run, Chevrolet-powered DW12 was shaken down by the team’s former driver Kyle Kaier at Sebring three weeks earlier. Ilott said it felt familiar compared to an F2 car, but that he appreciated being able to push harder on its tyres.

“In terms of a car, in a certain way the style is definitely closer to what I felt in the F2,” he said. “The F1, it’s an incredible car, but this on its own, with these Firestone tyres, you can really push it, really slide on it, which is something I haven’t really had in Europe. I did enjoy that on the first couple laps being able to go a bit sideways and enjoy it.”

Although Ilott has only been confirmed for the first of the remaining three IndyCar races this year, team principal Ricardo Juncos is keen for him to take on the rest.

“At the moment it’s one time,” he said. “We’re pushing for the last two races. Unfortunately I’ve got some things already organized for those weeks.

“It’s going to be last minute if I do commit to doing those. Ricardo has pushed me a lot to do it. We’ll have to see. I don’t think so, but never say never.”

However Juncos revealed he originally planned to have three different drivers in the car for their return to the championship.

“He was clearly on the top of my list as well as other drivers, to be honest,” said Juncos. “He knows this. They couldn’t commit to my original idea [which] was to have three different drivers for the last three races. All three very, very top ones. The other schedule unfortunately didn’t work out.

“So now Callum is already set for Portland since the beginning. Of course, like he said, we’re going to try to push a little bit so he can stay in the car. That would be great because is so important for the track learning going to next year, obviously that we talk about to keep building the team up.”

The reformed Juncos Hollinger squad is returning to the championship for the first time since 2019, when it pulled off a shock by denying McLaren and Fernando Alonso a place on the starting grid for the Indianapolis 500. The team has attracted backing from Brad Hollinger, who was previously a board member for Williams.

Juncos said he was impressed by Ilott’s first run in their car today. “He is very young, super talented. All this Formula 1 testing and development he’s doing is actually for us important.”

“A driver with no preconceptions from before,” Juncos continued, “not even driven an IndyCar before, has a [clear] mind, super proper feedback, by doing the job he’s doing in Formula 1, and the fact he’s 22, very young, also has a bright future here as well.”

IndyCar has seen a spate of drivers from Europe arrive in the series this year including Romain Grosjean, Kevin Magnussen and Christian Lundgaard. The latter surprised on his debut at the IMS road course by taking fourth on the grid after little practice.

Ilott was keen to play down expectations he might do the same. “The expectation is hopefully that we finish the race, get everything under control, and limit mistakes and problems,” he said. “That’s my expectation, that’s what I’ll be happy with. From my side, anything on top of that, points or whatever is a bonus.

“We’ve got to work and have realistic goals. Obviously people can have expectations of me, but they know where I stand after last year with Christian and that and Formula 2. They know my speed.

“At the end of the day we will work as we should. We’ve got to be focused and get what we can. Portland is a small track, but it doesn’t look easy. It’s tough, very tight. I’m focused and I don’t care what people’s expectations of me are. People know how fast I can be. Once we get it right, whether it’s in Portland or afterwards, we’ll see.”

His IndyCar debut comes amid speculation over his future. As RaceFans reported earlier this week, Ilott is expected to miss out on a chance to join Alfa Romeo’s Formula 1 team next year. For the time being he says he is keeping his options open.

“I’m here in IndyCar to experience it. Hopefully I’ll have a great time and it will attract me more to do it.

“[In] Formula 1 I’ve been in the testing-reserve role for a while now. Yes, of course there is a potential opportunity, but it’s not up to me. It’s not my decision. This is my decision to be here and to give this a go, but there is still potential in the F1 side as much as there is potential here.

“I’m enjoying it a lot here. It’s attracting me more and more to do this in the future.”