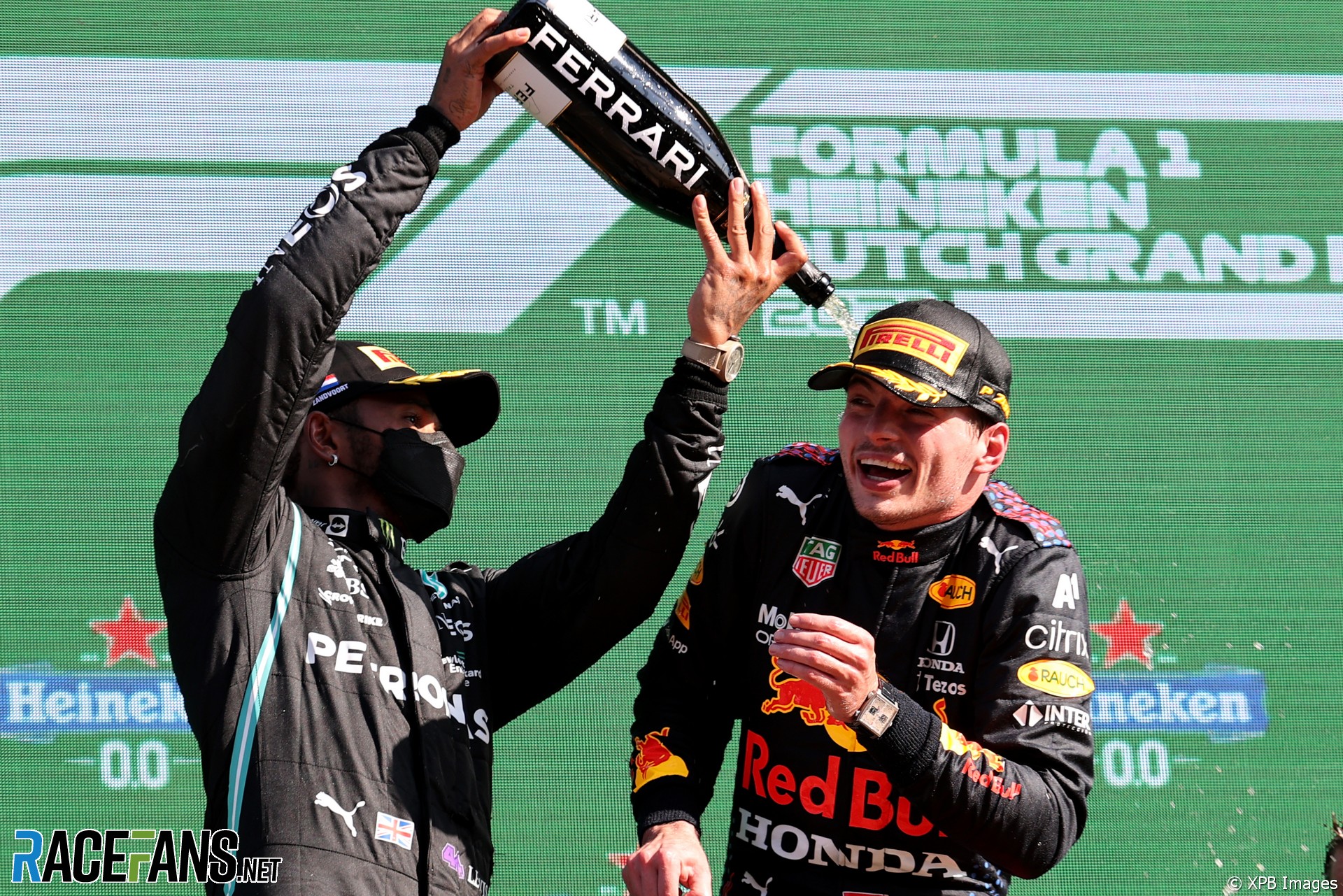 Max Verstappen retook the lead in the drivers championship in front of his home fans by winning the Dutch Grand Prix at Zandvoort.

Verstappen won an uneventful race ahead of rival Lewis Hamilton to move ahead of the Mercedes driver into the lead of the championship.

Valtteri Bottas finished third, with Pierre Gasly taking fourth place ahead of the two Ferraris of Charles Leclerc and Fernando Alonso. Verstappen lapped every driver up to Bottas in third.

At the start, Verstappen sprinted clear to take the lead on the opening lap, ahead of Hamilton, Bottas and Gasly. The two Alpine drivers of Esteban Ocon and Fernando Alonso made minor contact on the run to Gerlachbocht, while Antonio Giovinazzi dropped down to tenth place from his seventh place grid slot.

Having started from the pitlane, Sergio Perez locked up his front tyres heavily while trying to pass Nikita Mazepin into Tarzan. The resulting flat spot on the Red Bull’s hard tyres was so severe, Perez was brought into the pits to change onto medium tyres, compromising his weekend further.

Verstappen pulled a gap of just over three seconds to Hamilton as the top three disappeared from Gasly in fourth. Hamilton was brought in for an early first stop at the end of lap 20 to move onto the medium tyres. Red Bull reacted by pulling Verstappen in the very next lap, switching him onto the medium tyres and rejoining two seconds ahead of Hamilton.

Bottas inherited the lead but remained out on his used soft tyres for several more laps. With fresher tyres, Verstappen reeled in the Mercedes ahead, eventually slipstreaming easily back into the lead along the pit straight at the end of lap 30. Bottas immediately pitted the following lap to move onto the mediums tyres, rejoining in third.

Sebastian Vettel spun at Hugenholtz while trying to pass Robert Kubica for 14th, forcing Valtteri Bottas to take avoiding action. Vettel was able to continue and

Hamilton was pitted for a second time at the end of lap 39, moving onto a second set of mediums. Red Bull immediately reacted, bringing the race leader in at the end of lap 40. Verstappen was switched onto the hard compound tyre and released, comfortably ahead of his rival in the lead of the race.

Nikita Mazepin was called in to retire with a suspectedhydraulic issue on his Haas. Yuki Tsunoda also retired his AlphaTauri after reporting a loss of power, the team calling him into the pit lane for an early end to his afternoon.

With Hamilton on mediums, the question became whether or not the Mercedes driver’s tyres would last to the end of the race. Verstappen’s advantage sat at around three seconds up to the closing laps of the race.

Bottas appeared to ignore the instruction and duly set the fastest lap of the race. That left Hamilton with just a single lap to be able to claim the bonus point for fastest lap himself, which he was able to do comfortably.

Verstappen cruised around to claim an extremely popular home victory and take the lead of the drivers championship. Hamilton took the fastest lap and second place, ahead of Bottas.

Gasly finished fourth, ahead of Leclerc and Alonso, who passed compatriot Sainz in the closing laps. Sergio Perez eventually finished in eighth place, ahead of Ocon and Norris rounding out the top ten.