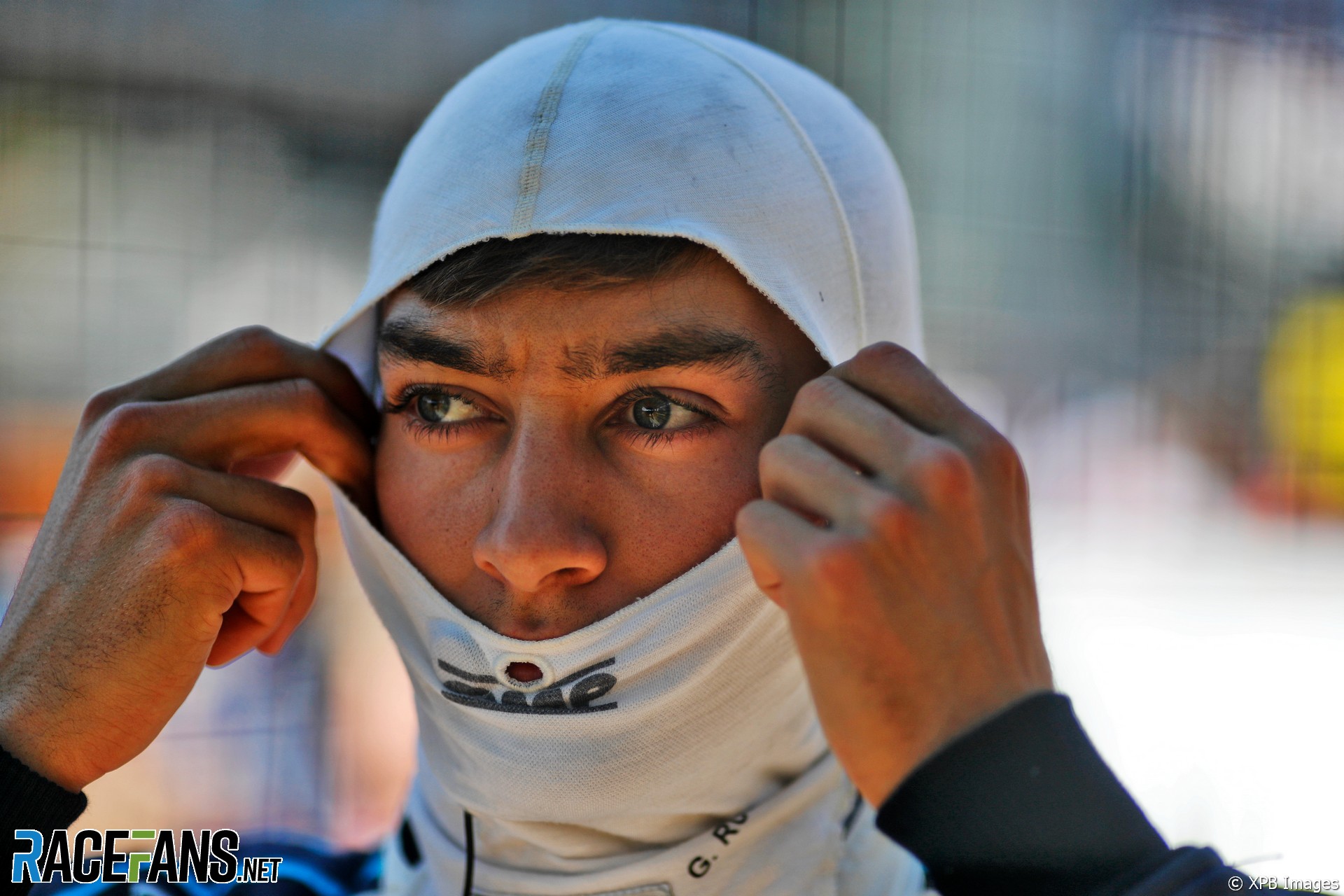 George Russell’s promotion to Mercedes’ Formula 1 team for the 2022 season has long seemed an inevitability, and with good reason.

The tremendous success he has enjoyed during his junior career and great potential shown in three seasons of grand prix racing, usually in uncompetitive machinery, marked him out as a serious talent in need of a top car. A place alongside Lewis Hamilton next season was confirmed as his reward earlier today.

“He has been a winner in every racing category and the past three seasons with Williams have given us a taste of what the future could hold for him in F1,” said Mercedes team principal Toto Wolff after Russell’s move to the team was finally made official.

Wolff famously promoted Russell to their junior driver programme in 2017 having been impressed by the 18-year-old’s professional approach which even extended to producing a presentation in Microsoft Powerpoint. There must have been quite a few slides in it, as Russell had already done a lot of winning.

Much of that had been in karts. Russell’s wins in Cadets and Rotax Mini Maxes followed by the CIK-FIA European KF3 championship trophy demonstrated his excellent pedigree. His first year in racing cars yielded the 2014 BRDC Formula 4 title as a rookie and the club’s prestigious young driver award.

That was followed by two tough seasons up against the might of the enormously well-funded Prema operation in the European Formula 3 championship (before the F3 name was transferred to the series then known as GP3).

That piled pressure on Russell upon his arrival in GP3 with the top ART squad the following year, his first season as a Mercedes-backed driver. Nothing less than the title would do for the 18-year-old.

He delivered in style. Sharing a team with three team mates including second-year drivers Jack Aitken and Nirei Fukuzumi, Russell claimed four wins and clinched the title with a round to spare. Significantly, all those wins came in feature races, most from pole, underlining the raw one-lap speed which has since become his F1 trademark.

That was also evident when he rose to Formula 2 the following year and again delivered the title the first time of asking, mimicking Charles Leclerc’s achievement over the previous two seasons. Russell’s ART F2 predecessor Alexander Albon led the way at first, but as the season progressed the Mercedes junior became the one to watch in qualifying.

In Formula 1, qualifying a sub-par Williams high up the grid has usually been the prelude to a ‘regression to the mean’ slide out of the points positions on race day. In F2 Russell had more scope to demonstrate his racecraft, as reflected by his tallies of five pole positions and seven victories – the latter equalling the single-season F2/GP2 record, also held by Leclerc and Stoffel Vandoorne.

Days when Russell’s luck turned against him offered other opportunities to show his potential. He started 12th in the sprint race at Baku after an unfortunately-timed Safety Car period the day before, but left many rivals behind with a superb start and passed the few cars which remained ahead for his first win. From the back of the grid at the Hungaroring he climbed 12 places to salvage a useful point.

On the face of it, his arrival at Williams initially offered him the opportunity to do little more than demonstrate his ability to annihilate team mates in qualifying, whether Robert Kubica (19-0) or Nicholas Latifi (28-0 and counting).

These are the performances which have earned Russell his ‘Mr Saturday’ moniker. If Hamilton, 37 next year, has lost one iota of his qualifying speed, Russell is surely the driver to expose it.

However other traits of Russell’s have been clear at Williams, not least his remarkable presence of mind on the radio during races. Some drivers merely absorb a stream of instructions from their race engineers. Russell reads the race for himself and urges them along in a manner reminiscent of past champions like Fernando Alonso – who, tellingly, has heaped praise on Mercedes’ newest driver.

In a sport where the rulebook is as labyrinthine as Formula 1’s, Russell’s razor-sharp racers’ mind is an advantage. At Monza last year Russell was the only driver to spot for himself that the pit lane entrance had been closed during a Safety Car period. Among those to be caught out were his future team mate, who admittedly had very little time to react, copping a race-losing penalty as a result.

Ironically, Russell’s very awareness proved his undoing when he made a one-off appearance for Mercedes in 2020. Having stunned by qualifying within hundredths of a second of Valtteri Bottas and seizing the lead at the start, Russell was on course for victory when the Safety Car was suddenly deployed.

Spotting the opportunity to make a low-cost pit stop, Russell slowed as he approached the pit lane entrance, giving Mercedes enough time to bring him in. He had shown the same foresight in a similar situation in Monaco previously with Williams. Unfortunately Mercedes slipped up, put Bottas’ tyres on his car by mistake, and a sequence of events which robbed him of victory began to unfold.

But that appearance left Mercedes well-placed to judge Russell’s potential in their car compared to Bottas. Russell told RaceFans earlier this year he was “not even close to the limits” of the W11. “I didn’t know the car,” he said, “the set-up wasn’t designed for me, I was uncomfortable, I was in pain while driving. I just made the most of a difficult situation.

“I thought that was the absolute maximum potential given the experience, but nowhere near the potential what could have been, had that been a full season.”

Alongside his speed, race craft, intellect and professionalism, Russell has also demonstrated his willingness to be a team player. He has shown dedication to the cause of pulling Williams from their grim low of 2019 back to the front of the field.

There’s no doubt he missed opportunities to score for them – notably in both races at Imola over the past 12 months – and it must have hurt that when the cards fell for the team at the Hungaroring it was his unfancied team mate Latifi who claimed the majority. But not only did Russell not complain, nor indulge in media chest-beating about his obviously superior speed, he positively urged his team during the race to sacrifice his position if necessary to aid Latifi ahead.

As last weekend’s race at Zandvoort showed, Mercedes expect their drivers to be fast and, when needed, team players.

Russell has shown he’s much more than just a one-lap specialist. Which is why, during the gap between Hungary and Belgium, Mercedes gave him the opportunity he’s awaited for years.