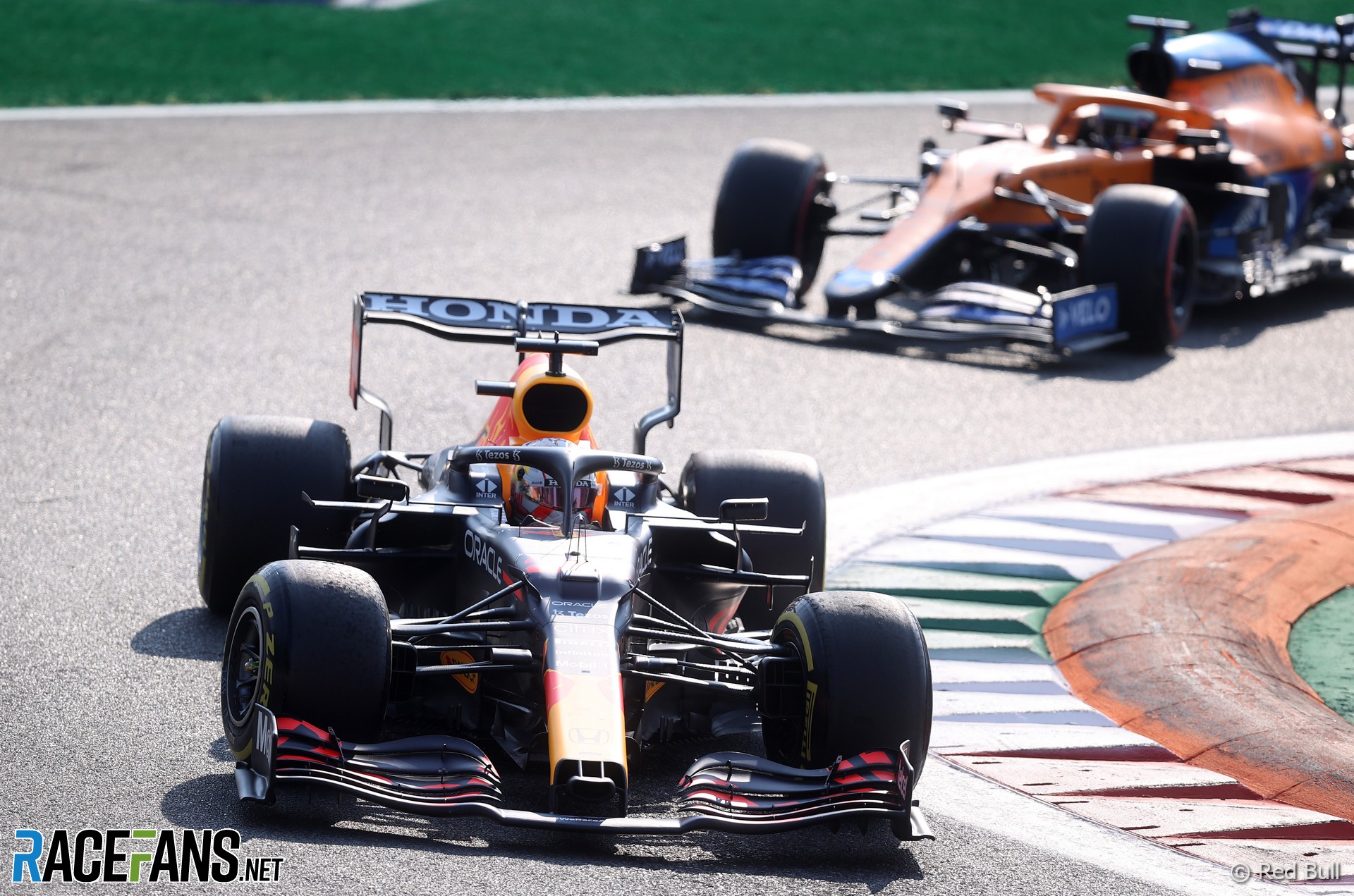 Max Verstappen has unexpectedly taken pole position for the Italian Grand Prix after his championship rival slipped up at the start of Saturday’s sprint qualifying race.

A tiny, two-millimetre misjudgement with his clutch was enough to cost Lewis Hamilton three places at the start, putting him at a disadvantage going into Sunday’s main event.

With two McLarens between the title contenders and the back-of-the-grid starts for the rapid Valtteri Bottas (engine change penalty) and Pierre Gasly (crash), a somewhat shaken-up grid adds to the intrigue ahead of F1’s fastest race.

Hamilton has ended up stuck behind a McLaren before – in Austria, Norris held him off for multiple laps at the start before being ceding to the Mercedes out of a desire to avoid spoiling his own race. Two McLarens, at a track they know is their best chance of a win for possibly the whole season, is literally double the trouble for the reigning champion.

Unless Norris and Ricciardo decide to let Hamilton through in order to ensure a strong finish for the team – and bank a useful points haul over championship rivals Ferrari – then Hamilton faces a wall of papaya between himself and the Red Bull he must beat.

That works in Verstappen’s favour – Hamilton couldn’t pass Norris in sprint qualifying, despite the McLaren driver having soft tyres which were expected to degrade quickly over 18 laps. They didn’t, no doubt partly thanks to the early appearance of the Safety Car.

McLaren have the advantage of being able to work together to cover off Verstappen or Hamilton, neither of who can count on the assistance of their team mates, at least not to begin with. While the final starting grid has yet to be finalised, Bottas will be at the back and Sergio Perez lines up ninth again having failed to make any gains in the sprint qualifying race.

Saturday’s race showed Monza is not kind to anyone trying to overtake. Although tyre degradation in the race may offer more opportunities, Norris and Ricciardo didn’t seem to be suffering badly with pace after eighteen laps on soft tyres – something that Red Bull team principal commented on after the session, saying the McLarens had proven that soft starting tyres could be a good strategy.

On the other hand, cars run with about a third of the fuel they would be loaded with for a full grand prix, during the shorter sprint session. That particularly flatters the McLaren, which comes alive as fuel burns off and which has made their race starts considerably less impressive on pace, compared to the front-runners.

That might not be the only reason Hamilton could not pass Norris during the sprint session. As Horner also noted that the Mercedes cars appeared to be struggling with electrical deployment, de-rating at the end of the straights, robbing them of the power advantage they enjoyed over flying laps in qualifying.

Passing will be a frustration for most drivers. Pierre Gasly watched sprint qualifying largely from the sidelines after crashing on the first lap. His analysis of the chance of overtaking was fairly bleak – at all ends of the field.

“We know it’s going to be very difficult and that’s the only thing I looked at today,” Gasly said. “Obviously, out of the track, I could see a Lewis really struggle, [he] could not pass Lando. Same [with] the Alpines and the Aston Martins – they were really close for many laps but still no overtaking.”

That’s a particular problem for Gasly – and Bottas, both starting from the back. “We know it’s going to be extremely difficult to come back,” last year’s Italian Grand Prix winner said. “At the end of the day, whether you finish P18, P11, P15 it’s the same, it doesn’t mean anything. So we need to try everything to at least score a point here.”

The sprint qualifying race has changed the complexion of the grand prix in one further significant way: The drivers all have free choice of tyres, and McLaren’s bold decision to start on softs may prompt some of them to try the same.

On the face of it this would seem like a natural decision for Hamilton: It could increase his chance of passing a McLaren at the start, and he’s likely to pit aggressively early anyway to get onto fresher tyres sooner and bank the lap time advantage in an effort to get ahead, so their shorter life span is less of a concern. The problem is Mercedes have tended to be less competitive on the softs relative to their rivals.

But Hamilton has had a sub-par weekend so far, losing out to his team mate in qualifying and wheel-spinning away what was a clear shot at pole position in the sprint qualifying race. If he’s going to claw back some of Verstappen’s points advantage on Sunday he needs to produce something special.

Who is your tip for victory in the Italian Grand Prix? Can McLaren get both their cars on the podium? And what about the fast drivers starting at the back?

35 comments on “How can Hamilton break through the wall of papaya to hunt down Verstappen?”