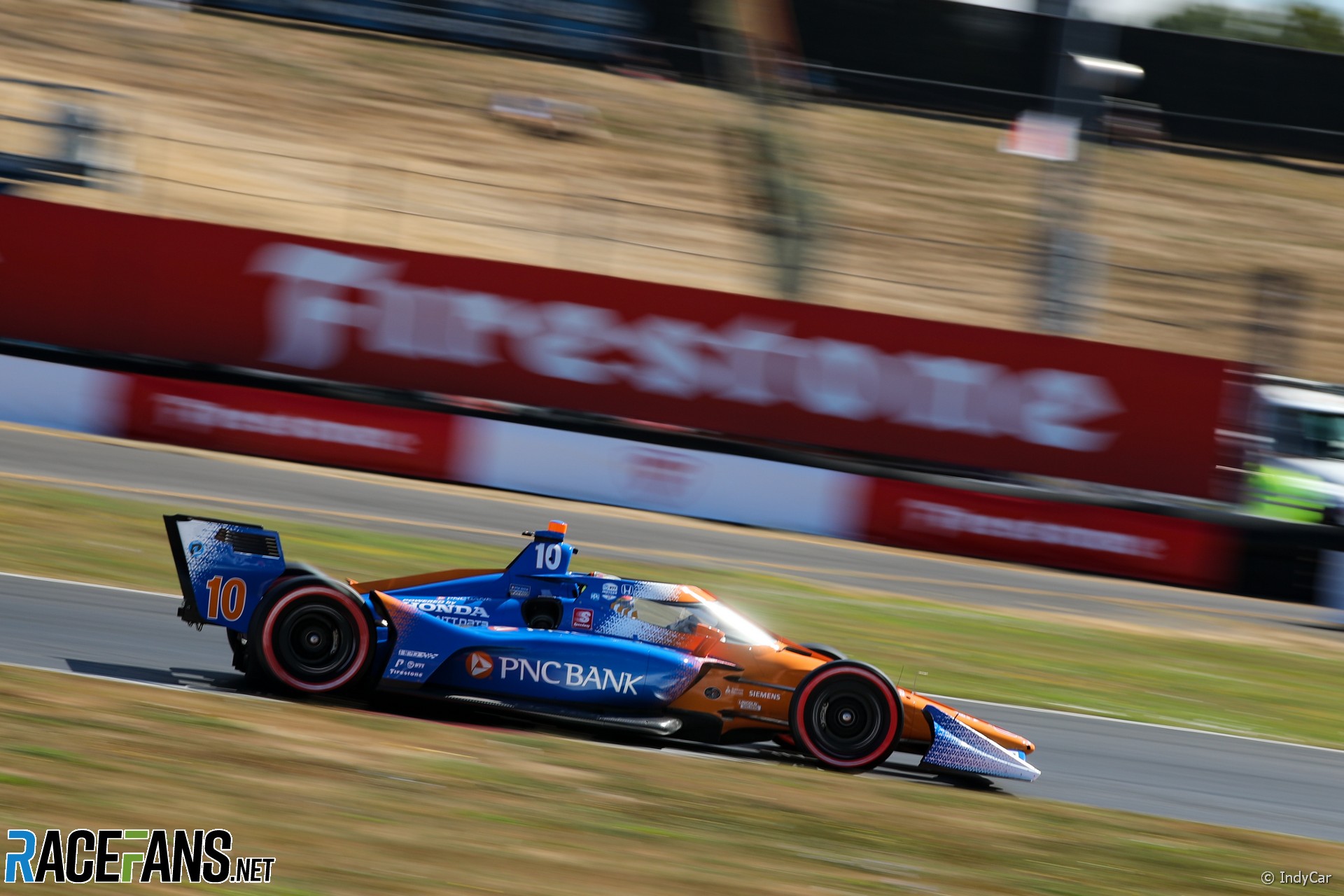 Álex Palou has won the IndyCar Grand Prix of Portland from pole position, and he has also retaken the lead in the IndyCar Series championship by 25 points over Patricio O’Ward with just two races remaining.

Palou, team mate Scott Dixon, and a number of other cars were caught up in a multi car incident on the opening lap. James Hinchcliffe retired as a result of the incident, while the likes of Romain Grosjean and Hélio Castroneves went to the garage for extensive repairs. Palou was moved towards the back of the field in 18th for cutting through the tight turn one and two chicane, one of several drivers who shortcut the chicane. There was a lengthy caution to re-order the field, and Palou and Dixon made their first routine pit stops.

Meanwhile, O’Ward took the lead from seventh of the grid, in position to extend his points lead to as much as 50 points. Graham Rahal slotted into second position behind him, and the two drivers ran in that order until the start of the first pit window. O’Ward made his first stop on lap 29, while Rahal and his crew deployed the overcut to try and advance their position. After pitting on lap 35, Rahal emerged with the net lead. O’Ward struggled for pace on the primary compound tyres, which allowed Rahal to gradually build an advantage.

The second full course caution arrived when the debuting Callum Ilott stopped at turn seven, and Dalton Kellett simultaneously stopped at turn one. Rahal remained out on track until he made his second pit stop on lap 74. The yellow flag laps meant that a two stop strategy was now viable for victory – and the likes of Dixon, Palou, Alexander Rossi, Jack Harvey, and Josef Newgarden now had a legitimate shot at victory.

The deciding move of the race came when Palou made his final pit stop on lap 79, and used the overcut to jump ahead of Rossi for the net lead of the race on a used set of primary tyres. Dixon made his final stop on the following lap, and rejoined just behind the new lead duo of Palou and Rossi.

With the pace advantage of the softer alternate tyres, Rossi was able to close to within half a second of Palou, until he ran wide exiting turn six with less than ten laps to go. That was enough to give Palou a buffer of 1.5 seconds, which he held until the finish.

It’s Palou’s third win at the season, in his first visit to Portland. after starting his weekend with a crash in Saturday practice, he was able to eventually convert his first true pole position into a potentially, season-defining victory.

Rossi finished in second for his first podium finish of the season. Dixon finished in third place. And from 20th on the grid, Harvey finished in fourth place, matching his best finish from St. Petersburg in the second round of the season. Newgarden made a similar charge through the field from 18th to finish fifth.

After locking up into turn one and nearly causing an even bigger crash on the opening lap, Felix Rosenqvist held it together to finish sixth. Marcus Ericsson finished seventh, and Colton Herta was eighth. Scott McLaughlin took one major step towards Rookie of the Year honours with a ninth place finish, as Grosjean finished 15 laps down in 21st.

The timing of the cautions – including two late cautions (one for Simon Pagenaud spinning out after contact with Will Power, then Oliver Askew being turned around by Sébastien Bourdais) did not work out in favour of Rahal, who led a race high 36 laps yet will finish only tenth. O’Ward struggled during his third stint on the primary tyres, and eventually fell to 14th place.

After a 35 point swing at the top of the table from the start of the weekend, Palou now leads O’Ward. Newgarden is third in the standings, 34 points behind Palou. Dixon is 49 points behind in fourth, and Ericsson, now the last driver that is mathematically eligible to win the championship, is fifth and 75 points behind.