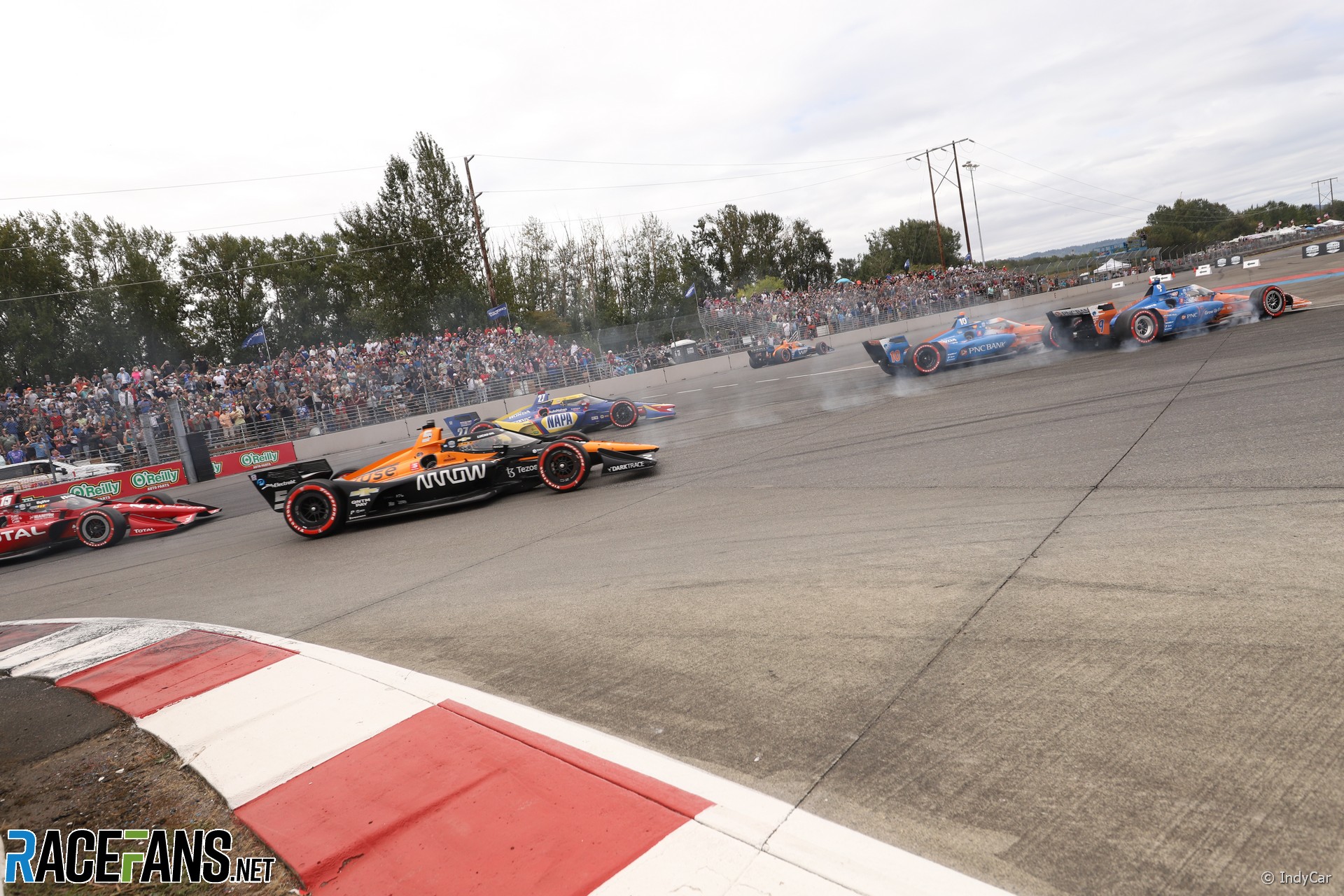 Less than six hours after the tight right-left Variante del Rettifilo at Monza became the scene of a major championship flashpoint in Formula 1, another tight right-left chicane – the first and second corners at Portland International Raceway – was the scene of a messy first-lap incident which left two of IndyCar’s more experienced drivers distinctly unimpressed with certain rivals.

The chaos broke out as pole winner Álex Palou and team mate Scott Dixon approached the corner Felix Rosenqvist behind them passed Alexander Rossi for third place. As Dixon cut to the right to try and get alongside Palou, Rosenqvist tried to cut to the left – then made contact with Dixon’s left rear wheel, upsetting his car under braking.

Dixon short-cut the infield portion of the chicane, and Palou did the same to avoid contact with his team mate. Rosenqvist drove straight through the escape road on the left. “I didn’t really have a choice but to go straight,” said Rosenqvist. “I couldn’t have really done anything so it was out of my hands, which is a shame.”

Behind them, Romain Grosjean came into the braking zone too quickly, and struck the right-hand side of James Hinchcliffe’s car, moments after Hinchcliffe checked up to avoid driving into the back of Sébastien Bourdais. IndyCar debutant Callum Ilott locked up his rear wheels as he tried to avoid hitting Scott McLaughlin, which sent him into the path of Will Power and Hélio Castroneves. Oliver Askew also locked the rears, trying to avoid a side impact collision with his team mate, Graham Rahal.

The aftermath was not as destructive as it might have been but five drivers – Power, Askew, Castroneves, Grosjean, and Hinchcliffe – were stopped on track as the caution came out. Power and Askew were able to resume running, but the other three drivers suffered significant damage.

“Obviously, it’s turn one, and everybody knows it’s going to be a problem, right?” exclaimed four-time Indianapolis 500 winner Castroneves, who was making his first start at Portland since the 2001 CART Indycar season. “So we’ve got to use common sense.

“I just saw somebody coming like a torpedo! The experienced guys start backing off, and I don’t know who it was, that just came and started hitting everybody. I guess the guy from the right side got hit, hit me, I end up hitting somebody on the left and bent the suspension.”

After extensive repairs by his Meyer Shank Racing crew, Castroneves returned to the track and turned the rest of the race into a de facto test session for next week’s race at Laguna Seca. He was classified 23rd, 19 laps behind.

While Castroneves at least has a full-time IndyCar return in 2022 to look forward to, James Hinchcliffe’s driving future in the series hangs in limbo at the end of a frustrating season at Andretti Autosport. He wasn’t able to continue after bringing his stricken number 29 Dallara/Honda back to the garage, leaving him 27th and last in the running order – absolutely not what the multiple race winner needed if he aims to continue racing in the series next year.

Hinchcliffe vented his frustrations – pointedly towards Grosjean – on the television broadcast. “It’s comical at this point. It’s so sad.

“You watch the replay, Romain wasn’t going to make the corner no matter what. I don’t know why he decided to brake so late, starting where we were with a 110-lap race. I’m sure he’s just as upset as everyone else. I mean, it’s an easy mistake to make. But I just can’t believe we keep being on the receiving end of this stuff, you know?

“We nearly got in the back of Bourdais, I avoided getting any contact there, and then we just got absolutely clobbered. It’s just so frustrating, it’s so disappointing. It would have been fun to see what we could do, but now we’re just, kind of on the sidelines watching.”

Grosjean, who early in his Formula 1 career had a reputation for being involved in first-lap incidents, was quick to apologise for his role in the collision.

“Portland was definitely not the weekend that we were hoping for,” Grosjean commented. “Qualifying was not easy and I made a mistake going into turn one at the start. I’m sorry to everyone that was involved.”

“It’s too bad because we had really good pace, but we lost too much time at the beginning. Hopefully we do better next week at Laguna Seca.”

The incident cost Grosjean in his fight with Scott McLaughlin for top rookie honours in the series. Having finished 15 laps down in 23rd position, Grosjean heads to Laguna Seca trailing McLaughlin by 38 points with two races remaining.