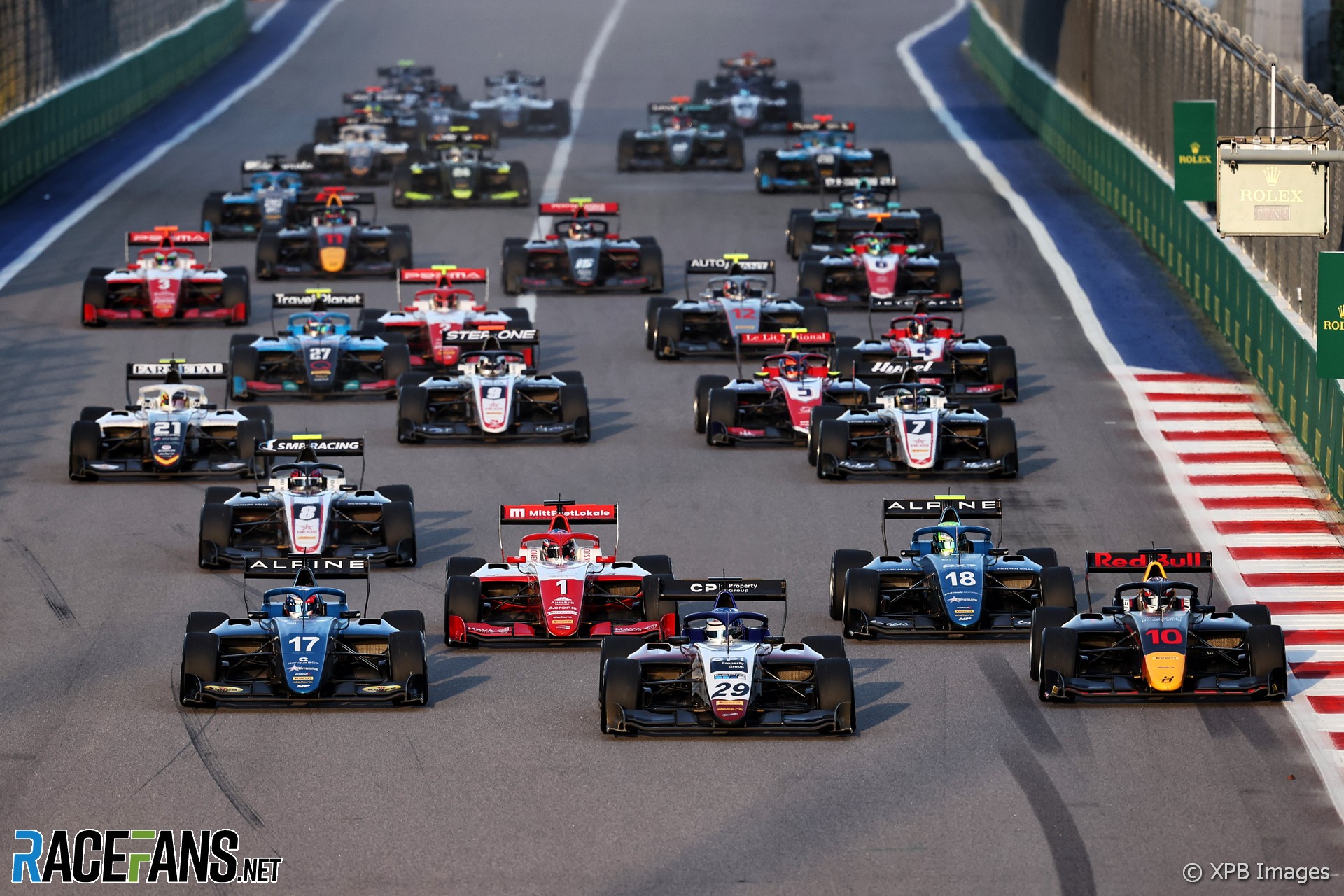 Dennis Hauger has sealed the 2021 F3 title in unexpected fashion, winning it on Friday after the opening race at Sochi was brought forward.

Logan Sargeant won the first race of the weekend which was originally due to take place early on Saturday. The change of date, announced earlier today, was provoked by concerns over heavy rain forecast tomorrow.

Red Bull immediately announced Hauger will move up to Formula 2 next year. He saw off the challenge from fellow Red Bull junior Jack Doohan, who went into the race 39 points behind his rival after claiming pole position for Sunday’s feature event.

Victor Martins took pole for race one on the partially reversed grid, having qualified 12th, with Sargeant alongside him. Fourth-placed Hauger shared the second row with Jak Crawford.

Taking the four points for feature race pole meant Doohan started the opening race 12th. A poor start and trip across the kerb at turn two saw him drop down the order, eradicating his hopes of catching up to Hauger.

Sargeant took the lead at turn three from Martins, who struggled to keep close to him thereafter. After DRS was enabled on lap four Hauger moved up to third, getting a huge tow through turn 13 to pass Crawford and take fastest lap of the race so far.

Hauger was able to put together fastest lap after fastest lap, closing down on Martins until he was able to make a safe DRS pass on lap 11. The Prema driver was taking no unnecessary risks, but having one hand on the trophy seemed to have gifted him a confidence and pace other drivers couldn’t find.

Tijmen van der Helm’s engine spectacularly failed in a plume of flames and smoke on lap 14, causing a brief Virtual Safety Car period. His car was rapidly retrieved and racing resumed on lap 16 with Collet still fighting Martins for third.

By lap 17 Doohan was stuck in 15th, while Hauger’s second place would more than secure him the title and the championship became his to lose. Two laps later Novalak passed Collet for fourth, which relieved the pressure on Martins.

Sargeant, out in front, had no such an easy last few laps, hassled by Hauger right to the chequered flag. The Prema driver was unable to take the win, but second place meant he Doohan’s hopes of keeping him from the title were over.

While Hauger sealed the championship with 205 points, the fight for second place can still continue across the weekend with Frederik Vesti, Martins and Novalak all in reach of Doohan on 154.

Red Bull motorsport consultant Dr Helmut Marko congratulated Hauger on his success. “He has had a great 2021 F3 season,” said Marko. “A mistake early on but otherwise he has been exceptional. He has shown great ability, he has the speed within him and he is very much going in the right direction.”

“He will drive for us in Formula 2 in 2022 and there is only one step to make after that. It does require him to continue to improve very much in the same way that he has this season. He is not there yet.”