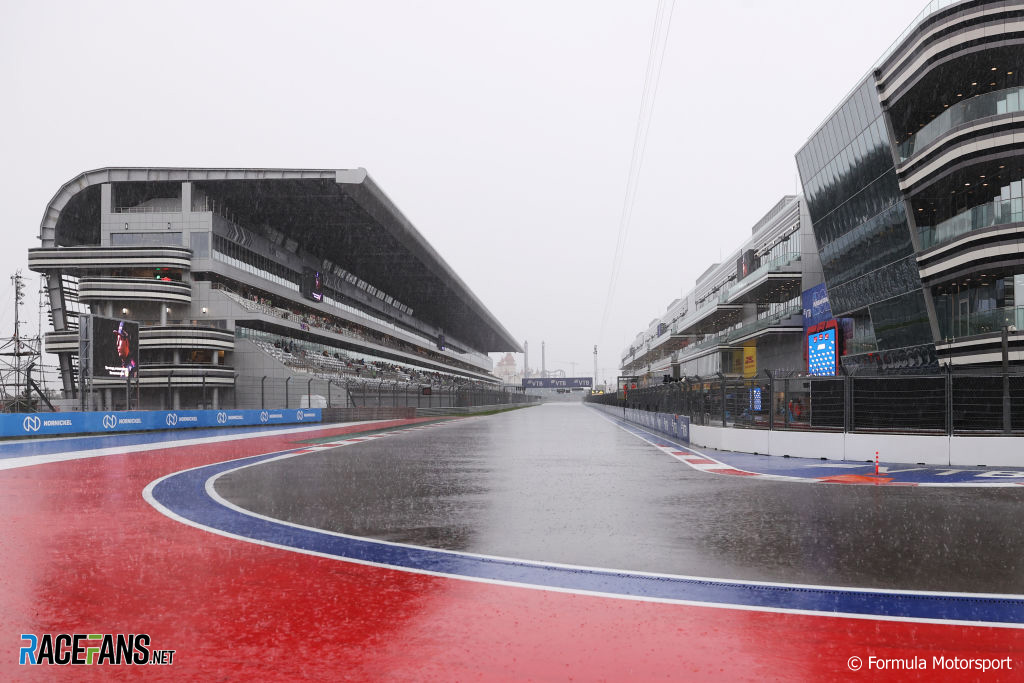 Heavy rain at Sochi Autodrom has forced this morning’s Formula 2 race to be postponed.

The decision not to proceed with the race was taken swiftly as rain poured at the circuit. Race control decided against opening the pit lane for cars to join the track. The Safety Car was sent out to evaluate the conditions, following which proceedings were soon halted.

Despite the extremely wet conditions at the circuit, Formula 1 race director Michael Masi is hopeful the afternoon’s qualifying session for the Russian Grand Prix will be able to go ahead. It is due to start at 3pm local time.

“What we’ve seen from the forecast side is that we will have this level of rain until about 1:30-2pm local time and then decreasing in the afternoon,” said Masi. “The priority from today’s perspective is obviously Formula 1 qualifying this afternoon.”

However even if the rain eases in time, visibility at the circuit could become a problem, he admitted.

“The determining factor this afternoon will be the light,” he explained. “Sunset locally is about quarter past six in the evening. But with weather conditions like this, obviously light diminishes far earlier. So that will ultimately be our cut-off point.”

That could lead F1 to hold qualifying on Sunday morning, as last happened at the Japanese Grand Prix in 2019.

“If qualifying isn’t able to happen today, as we’ve seen a few times before in the past, then we’ll re-do our programme and hold qualifying on Sunday morning,” Masi confirmed.

The first change to the programme for this weekend’s race was made yesterday when the opening Formula 3 race was brought forward from Saturday morning to Friday afternoon. Masi said that decision was vindicated by the teeming conditions at the circuit today.

“We were fortunate enough in restructuring the programme to have the first Formula 3 race yesterday, pre-empting the weather that was going to happen this morning,” he said. “Which, based on what we saw when we came out to the circuit this morning, was absolutely the right decision. It was torrential at the time we would have been having the F3 race. So we did that and now we’ll just sort of look at the day ahead and take it step by step.”

In addition to F1 qualifying, final practice for the grand prix plus further F3 and F2 races were also scheduled to take place at the track today. All face the threat of disruption due to the conditions, and fan zone activities at the circuit have also been postponed due to rain.

“The procedure today will be that we will aim to start all sessions, get everything ready from an operational perspective, and then judge the conditions at the time,” said Masi.