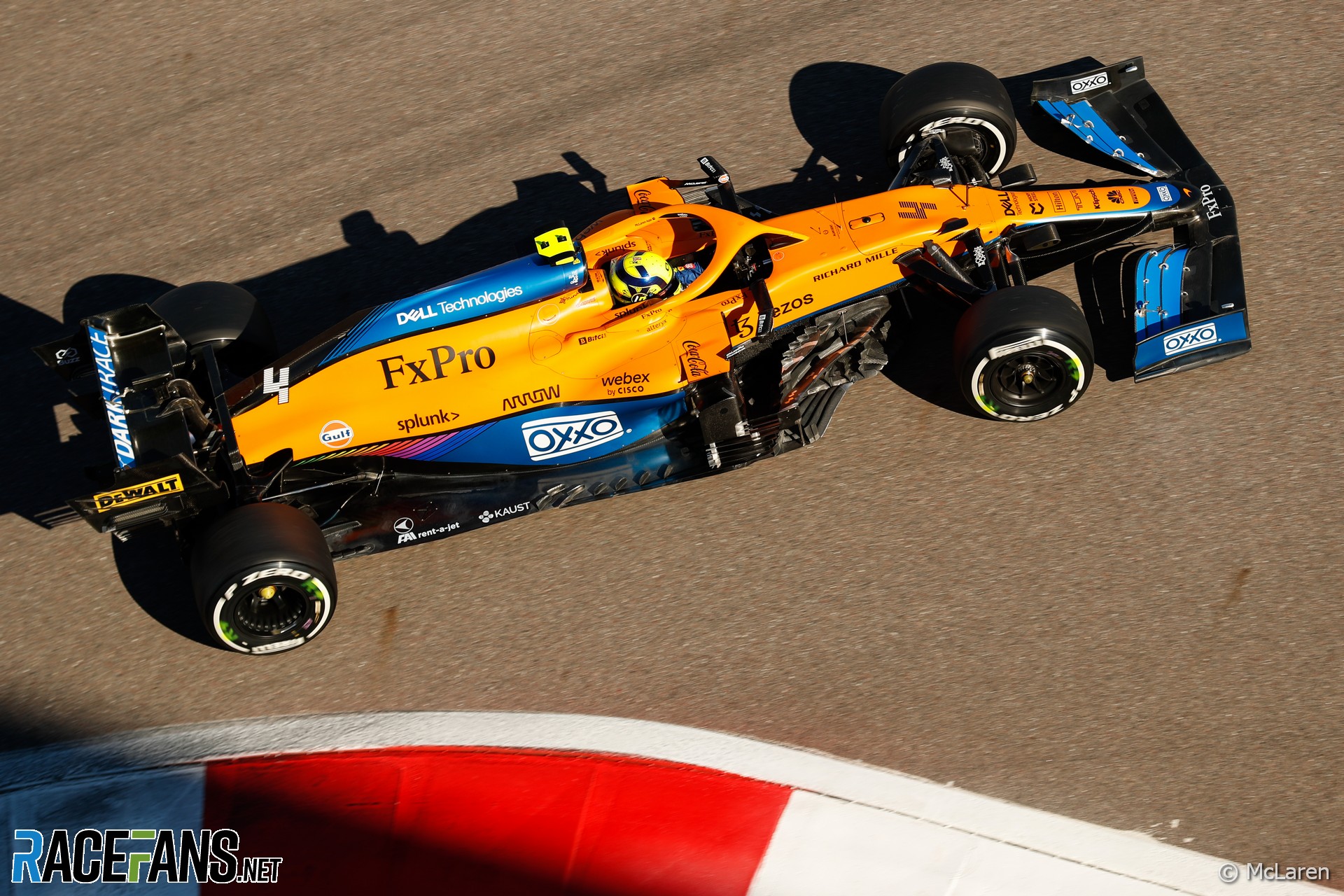 In the round-up: Lando Norris says an engine glitch caused his spin as he entered the pit lane during Friday’s first practice session at Sochi.

Norris suffered slight damage to his front wing when he McLaren spun around on the way into the pits at Sochi yesterday. He said the low-speed impact “wasn’t my fault.”

“Something happened with the engine so not my fault, not an embarrassing spin,” Norris explained. “But not ideal, obviously it damaged the front wing as well which was not what we wanted at the end of the session, or at all.”

Despite the setback Norris was pleased with how his Friday went. “The whole day was a bit up and down. We struggled quite a bit in [second practice], we made quite a few changes on the car for the second practice and definitely improved it quite a bit. So we’re left with the more positive feeling today going into tomorrow and Sunday.”

Giovinazzi encouraged by pace despite crash

Antonio Giovinazzi had a harder hit with the wall in second practice, but felt his Alfa Romeo had good pace around Sochi.

“The wind was quite inconsistent during the run and I got a little bit of understeer, more understeer than the lap before,” he said. “I touched a little bit the [artificial] grass on the exit and I lost the rear. So unfortunately it happened.

“Otherwise I think we were not too bad in terms of pace so we’ll see tomorrow.”

Oscar Piastri has claimed pole position for the third Formula 2 feature race in a row. The points leader saved his best until last as times tumbled throughout F2’s qualifying session, and beat Jehan Daruvala by almost two-tenths of a second.

Piastri’s closest championship rival Guanyu Zhou claimed fourth on the grid for Sunday’s main event and will share the second row with Theo Pourchaire. Dan Ticktum, who was tenth fastest in qualifying, will start the first sprint race on Saturday morning from pole position on the partially reversed grid.

Fresh from his victory at Laguna Seca five days ago, Colton Herta led the first practice session for this weekend’s championship-deciding race at Long Beach. Points leader Alex Palou was third while Josef Newgarden and Patricio O’Ward, the only drivers who can stop him taking the title, were 10th and 16th.

And the rain begins here in Sochi 👀🌧

|@LewisHamilton says there was "still some discomfort from my neck on my first time back in the car at racing speed" since @Max33Verstappen's Red Bull landed on him at Monza. #F1 #RussianGP pic.twitter.com/hA5TdQrePn

"We're expecting very strong attendance and we want to create the same sense of excitement and energy this event typically carries. We're doing that it in a very safe and secure manner. That's important because when this race concludes (Sunday) this will have been the safest mega-event in California open to anyone to attend."

"The shortcoming in content like Drive to Survive, produced in partnership with F1, is the lack of a critical lens... The sport faces two major threats to its viability, yet neither gets even a single mention across Drive to Survive’s three series."

Should Lewis Hamilton use the opportunity this weekend to replace his power unit?

Probably too simplistic, but I’d take a new PU as well.

This seems to be the ideal weekend as knowing that you do not need to qualify well allows you to set up the car for a dry race instead of a wet quali.
Jff