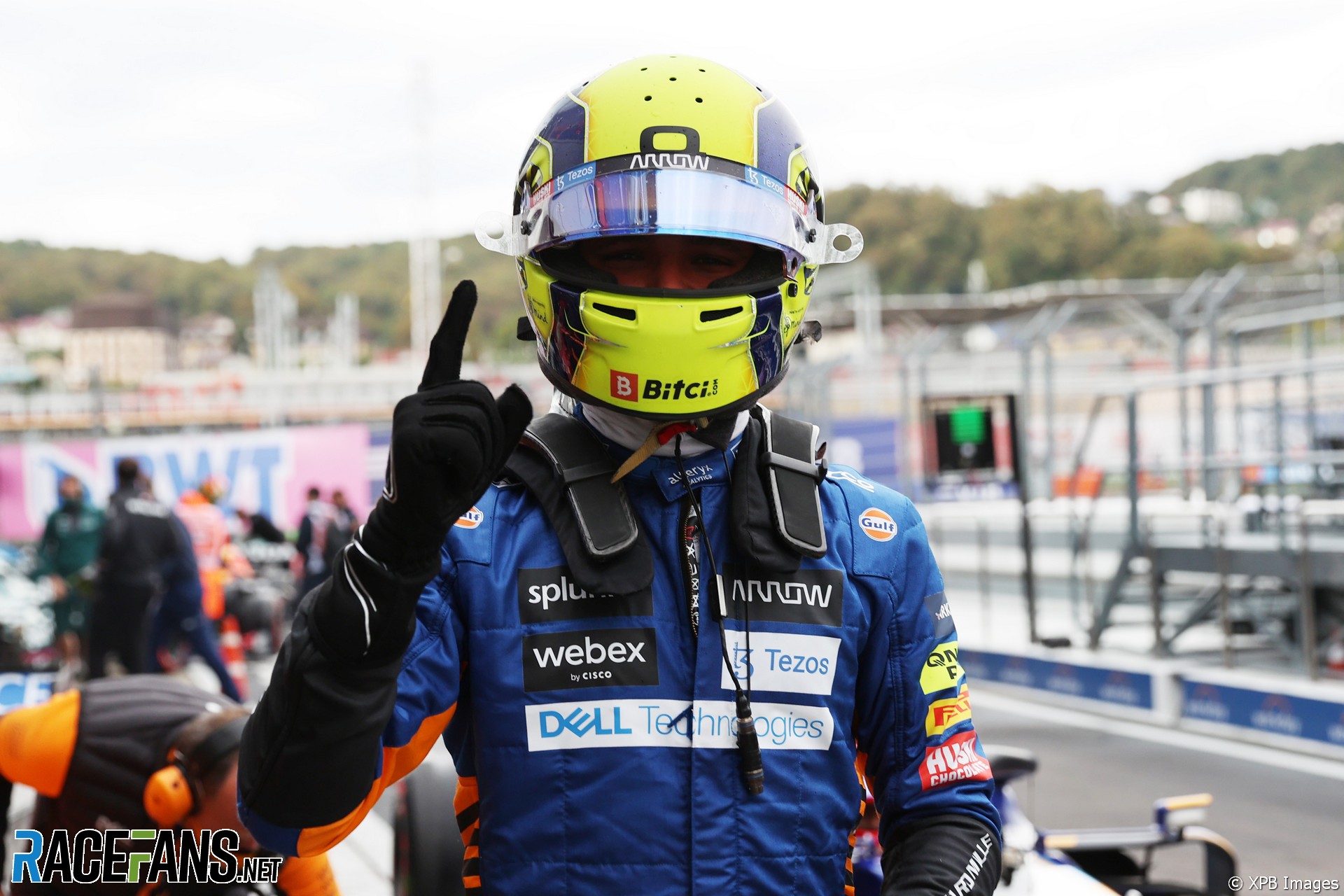 For the second consecutive grand prix, the enthralling season-long battle for the championship between Max Verstappen and Lewis Hamilton is under threat of becoming a secondary narrative to a McLaren driver chasing an unexpected victory.

With Lando Norris having earned pole position for the first time in his relatively young Formula 1 career by delivering the best lap on soft tyres on a drying track in qualifying, there’s a very legitimate prospect of McLaren backing up their first victory in 170 grands prix with a second at the very next race weekend.

But while McLaren proved they had enough pace around Monza to hold off the competition behind them, replicating that over 53 laps around the Sochi Autodrom is a different prospect entirely.

Going into the race at Monza, even without pole position, McLaren talked up their chances of staying ahead if they took the lead at the start. That proved exactly how the race unfolded, aided of course by the title contenders taking each other out at half-distance.

However Norris is more equivocal about whether he can convert pole position into victory on Sunday. “Do I think we can win? I would love to answer.

“I believe we can, there’s an opportunity for it. But Mercedes are still as quick as they have been all season, it’s probably one of their best circuits of the whole season. So it’s going to be a good challenge, but I’m up for it.”

Norris and McLaren’s first step to victory will be to hold onto the lead of the race during the almost 900 metre sprint down to the first true corner of turn two. To achieve this, he will have to hold off his former team mate Carlos Sainz Jnr in the Ferrari who will be looking to make the most of the slipstream on the run down to the first braking zone of the race.

“I think there’s two options,” Sainz explains. “I either get a good getaway and it’s a direct race into turn two, or if not, obviously I’ll need to try to find a slipstream, because we know we are not the fastest on the straights and we are doing to need to find some tow, some draft, because if not, it’s going to be a long run down into turn one.”

Behind both Norris and Sainz is another driver who will be itching to get to the first corner ahead of the pair of them – George Russell. After another wet qualifying session sees him at the sharp end of the grid, Russell was surprisingly bullish about Williams’ chances both at the start and throughout the race.

“We’re pretty slippery on the straights and hopefully Lando will give me a nice little slipstream into turn one,” says Russell.

“We’ve been scoring points now – three in the last four again. There’s no reason why we just can’t keep on going and we’ve got to be aiming for the podium. We’ve got nothing to lose and we’re just going to go for it.”

“I would not be surprised if George is leading the race after turn three,” remarked Mercedes team principal Toto Wolff, jokingly suggesting the team’s future and current drivers, in the shape of Russell and Hamilton, could be leading at the end of lap one.

Should Norris emerge from turn two with the lead intact, his prospects of victory are enhanced by the fact that most of the fastest cars on the grid – the Red Bulls and Mercedes – sit multiple places behind him on the grid.

With championship leader Verstappen consigned to the back of the grid through a combination of two penalties and Hamilton fourth, one of the most intriguing questions to be answered tomorrow is how far each contender will end up the order by the chequered flag.

One element that could play a part in how the course of the Russian Grand Prix runs is in how Saturday’s semi-washout means that each driver starting from the top 10 places on the grid has a rare opportunity to start the race on whatever compound of tyres they desire. With every driver in the top ten having progressed to Q3 on intermediate wet tyres, there is no obligation to start on their Q2 set.

Interestingly, this means that Sunday’s grand prix will resemble those that use F1’s new sprint qualifying race format – previously seen at the last round. That time, Mercedes took advantage of their unusual opportunity to start Hamilton on hard compound tyres for an extended opening stint. While Mercedes may have improvised in Monza on their strategy to cover Verstappen after his pit stop delay, it will be interesting to see if they opt to play a patient game again with Verstappen being so far back.

A longer first stint may be more attractive to teams given how green the Sochi surface will be after the thorough washing it received on Saturday. With a relative lack of rubber on Sunday compared to a typical race weekend, the likelihood that drivers will have to manage the graining on their tyres only increases – although the projected higher temperatures for the race start time may help to lighten this to a small degree.

“I think the degradation could be really high tomorrow because of the green track,” says Red Bull’s Sergio Perez.

“The first couple of laps are going to be critical in that regard. So it will be interesting to see what happens with the strategy because we’re going to find a track that’s very different to expectations.”

The other crucial element of the race will be how much progress Perez’s team mate Verstappen will be able to make and limit the damage in the drivers’ championship having chosen this round to take his power unit penalty. Verstappen has experience of making his way through the field from the back in Russia – having gone from 19th to fifth here in 2018 – but with no Saturday practice even he is unsure as to how to read the performance comparison between the Red Bull and the Mercedes.

“It was a little bit difficult, but they still look very strong,” Verstappen says. “Of course, they will have turned up their engines in second practice for a fast lap and, from my side, I knew that I was starting in the back, so there was no reason to do that. So I guess we’ll have to wait and see how competitive we are going to be.”

The final factor that could affect the outcome of proceedings is whether the weather chooses to play a role in the action once again. There may currently only be a 20% chance of rain throughout the course of the race, but with Verstappen admitting that he expects overtaking to be easier for him should the track turn wet, he could be forgiven for hoping for that number to increase overnight.

Whatever the weather, all the ingredients are there for possibly the most intriguing Russian Grand Prix we’ve seen to date, with the prospect of another new race winner as high as it’s ever been and the chance of another significant swing in the title fight between Verstappen and Hamilton.

Will Norris, Sainz or Russell grab the opportunity to score their first win? Which of the championship contenders will come out ahead?

18 comments on “Will Norris convert his first pole into maiden victory at Sochi?”