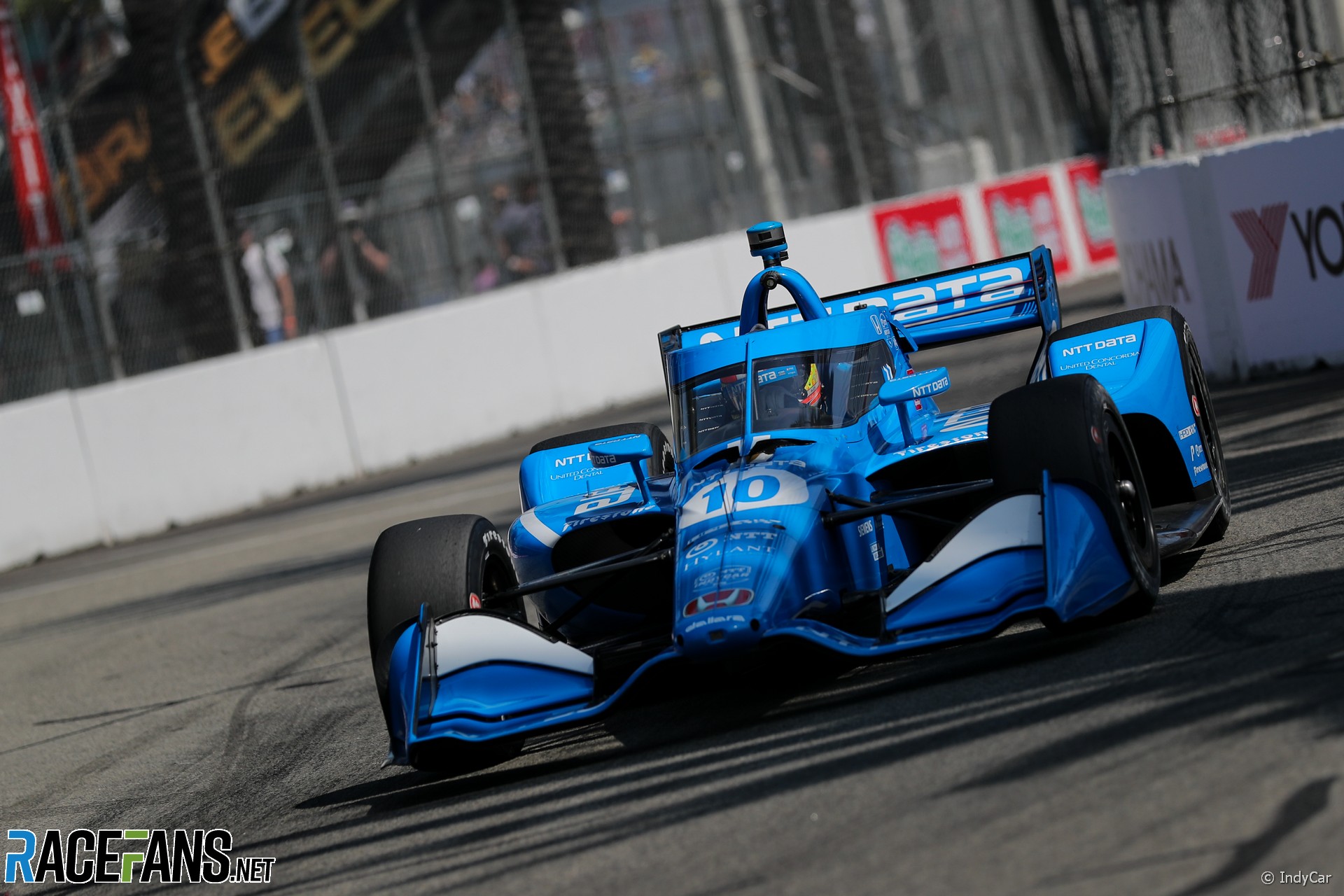 24-year-old Álex Palou from Barcelona, Spain, has won his first IndyCar Series championship in just his second season with a fourth place finish in Sunday’s season finale on the streets of Long Beach. Meanwhile, Colton Herta capped off his 2021 season by charging from fourteenth on the grid to take the win in his home race, narrowly holding off Josef Newgarden over the final laps.

The battle for the Astor Challenge Cup saw an immediate flashpoint on the opening lap, when Ed Jones made contact with Patricio O’Ward at the hairpin turn 11. The contact sent O’Ward spinning to the back of the field. A separate incident for Sébastien Bourdais brought out the first caution.

O’Ward was understandably frustrated with Jones after the incident. While there was no body or suspension damage to his car, the contact that he sustained had long-term effects. On lap 20, O’Ward’s black and orange Dallara/Chevrolet ground to a halt, coasting down East Shoreline Drive with a broken half shaft. With his championship chances over, and now relinquishing second in the standings – O’Ward stopped at the exit of pit lane, which brought out the second caution. O’Ward was able to return to the track to attempt to finish the race, but he was only able to complete 43 laps and finished 27th.

Newgarden led from pole for the first 19 laps of the race, and came into the pits just before the second caution period. But it was Herta – who absorbed some light contact in the O’Ward and Jones incident at the start – that was on the move. After the third caution period, caused by Marcus Ericsson’s race-ending accident at turn one, Herta was running in net third position after his first stop.

When the race restarted again on lap 31, Herta cut and thrust his way past Scott Dixon for net second place at turn seven. On the next lap, he overtook Newgarden at turn nine to take the race lead. Herta put his second set of fresh alternate compound ‘red tyres’ to the pavement and began opening up a margin with searing pace. By the time Herta made his second stop on lap 54, he had an 8.8 second margin to Newgarden.

For the final stint, it was Herta on a fresh set of the harder primary ‘black tyres’, with Newgarden on a scrub set of alternate tyres. After the fourth caution of the race, caused by a turn nine collision between Oliver Askew and Conor Daly, Herta was able to get a great initial restart. Lap after lap, Newgarden was able to catch up, until he was within half a second of Herta with five laps remaining.

But in the same rare form which propelled him to victory a week ago at Laguna Seca, Herta had more than enough pace in hand to keep Newgarden at bay, securing his third win of the season – back-to-back wins to close out the year, and Herta’s first win on the streets of Long Beach.

Newgarden finished 0.588 seconds behind Herta in second, to clinch second in the IndyCar Series championship, ahead of Dixon in third – and Palou, in fourth, achieved what he needed to become the first Spanish driver to win a major American open wheel racing championship in just his second season, and his first as a driver at Chip Ganassi Racing. Palou’s championship title is the fourteenth for the Ganassi team, placing the young Spaniard in the company of past champions Dixon, Jimmy Vasser, Alex Zanardi, Juan Pablo Montoya, and Dario Franchitti.

“I don’t know what to say, I’m super proud to be part of Chip Ganassi Racing,”

Four-time series champion Sébastien Bourdais, on the record earlier today saying that this will be his last race as a full-time IndyCar driver, recovered from his opening lap woes to finish eighth. Takuma Sato and Will Power completed the top ten.

Scott McLaughlin finished 11th, and clinched IndyCar Series Rookie of the Year honours. Romain Grosjean’s chances of overtaking McLaughlin in the standings vanished after he made contact with the wall at turn eight on lap 58 – just enough to break the left rear suspension. Grosjean completed 75 laps before retiring later in the race.