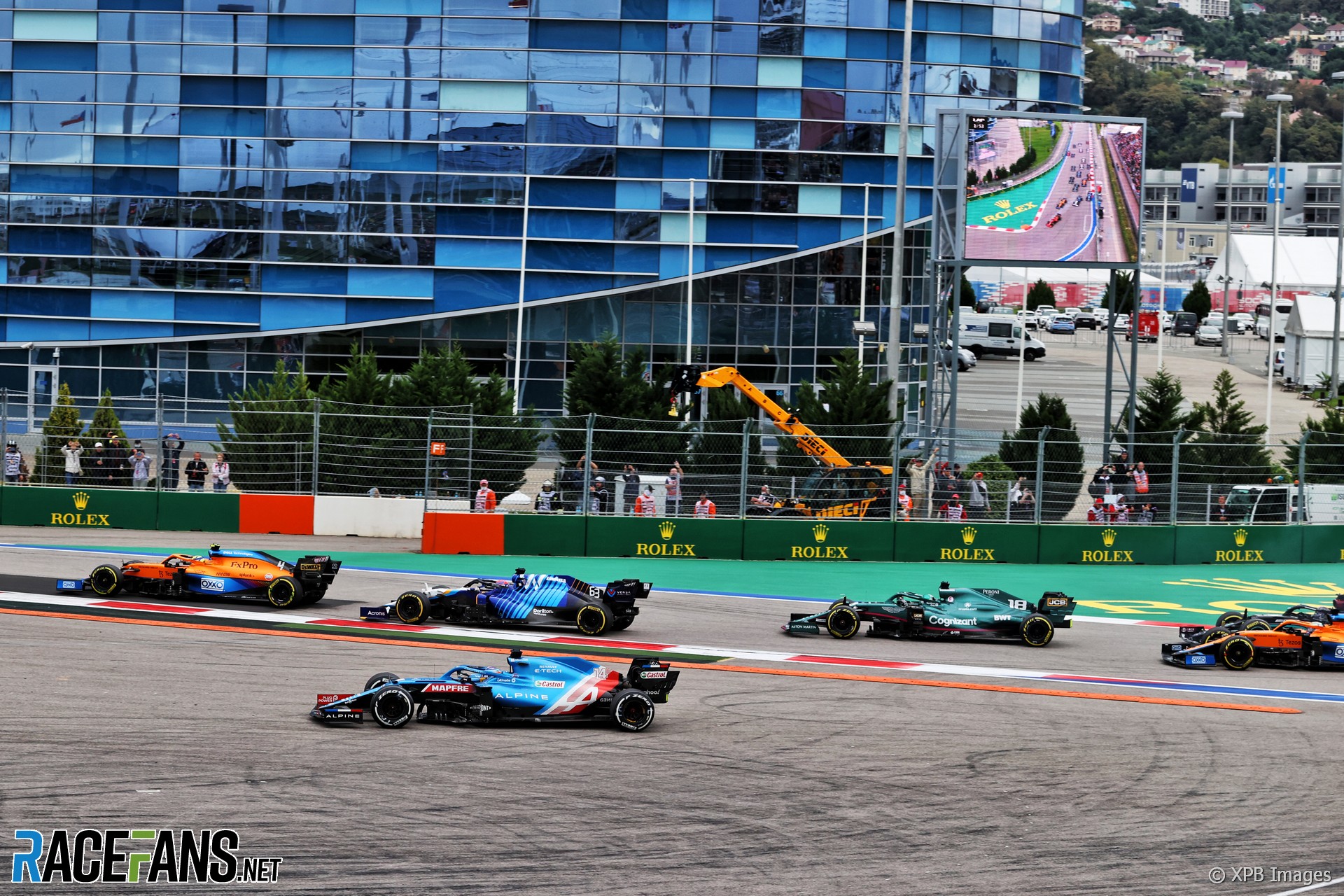 Fernando Alonso’s determination not to let his rivals get the better of him by exploiting the grey areas of Formula 1’s rule book was on display at the start of the Russian Grand Prix.

Before Sunday’s race began Alonso was clearly minded to make sure that didn’t happen again. During his laps to the grid he explored the run-off area at turn two, familiarising himself with the route drivers were required to take as they rejoined the circuit.

The instructions from race director Michael Masi to the drivers was clear. Any driver who failed to negotiate the corner had to rejoin the track by driving through a set of polystyrene blocks positioned in the run-off area.

But the regulations were seemingly written in the expectation that any driver who found themselves in the run-off at turn two would have lost time by running across one of the many ‘sausage kerbs’ positioned at the corner. They appear not to account for the possibility a driver would intentionally aim to miss the corner on the first lap.

From sixth on the grid, Alonso was seventh as he began to brake for turn two. But he didn’t slow as much as his rivals. With several other cars to his right blocking his route into turn two, Alonso knew there was a quicker way through the opening bends: He bailed out of the corner, drove around the first sausage kerb and got on the throttle, negotiating the polystyrene blocks as quickly as he could.

Alonso came back onto the track in third place but didn’t have the same momentum as cars behind him. He was no doubt also mindful that past precedent requires drivers to relinquish any positions they gain by going through the run-off at a corner.

Through turn three he lifted the throttle briefly, allowing George Russell back ahead of him. Lance Stroll also took him on the way into turn four, leaving Alonso fifth.

This was still a net gain on his position heading into turn two. Alonso had been behind Daniel Ricciardo and Lewis Hamilton when they began slowing for turn two, yet did not cede positions to them afterwards. Ricciardo did pass the Alpine on lap one, but only because Alonso had run wide while trying to regain his position from Stroll.

Nonetheless Masi was satisfied Alonso had complied with the rules and denied he had ‘got away’ with gaining positions in the run-off area.

“He didn’t get away with it,” Masi insisted when asked by RaceFans. “On the first couple of turns of any race, if there are areas like that, the drivers need to get back behind the driver that they entered the corner behind, which Fernando did. Very quickly.”

There is a grey area here, which Alonso exploited. While he was behind Ricciardo and Hamilton as they braked for turn two, he was ahead when they began turning into the corner. But would Alonso have been ahead of them had he braked hard enough to turn into the tight corner, instead of negotiating the quicker route through the run-off area?

Three other drivers cut through the run-off on lap one but unlike Alonso, all made the decision much later than he did and therefore had already slowed down considerably. Pierre Gasly bailed out mid-corner, Antonio Giovinazzi was hit by Mick Schumacher and Max Verstappen also took a trip over the sausage kerbs.

The precedent for how these incidents are handled was established in 2019 when Sergio Perez was penalised after gaining places by going through the run-off at Paul Ricard. Based on that, Masi was satisfied with how all four drivers rejoined the track on Sunday.

“Perez was penalised cutting effectively from three to five – the chicane right, left, right – and we said from that point forward, for the first few corners where that happens, either the team automatically tells their driver to give the position back to where they entered the corner, or I would suggest that they give the position back. And we looked at all four of those that went off there today and all four did exactly that.”

Formula 1’s rules and the run-off at Sochi was designed to penalise a driver who attempted to make the corner and bailed out of it. It was not designed for a driver savvy enough to realise that purposefully taking to the run-off instead of tackling the corner could actually be the quicker option on lap one.

No doubt Alonso’s rivals will have taken note of this and we can expect to see more of it at other circuits where the same opportunity exists. If Formula 1 wants to ensure drivers stick to the circuit, it needs to make its run-off routes slower than the one at Sochi, or install more gravel traps.