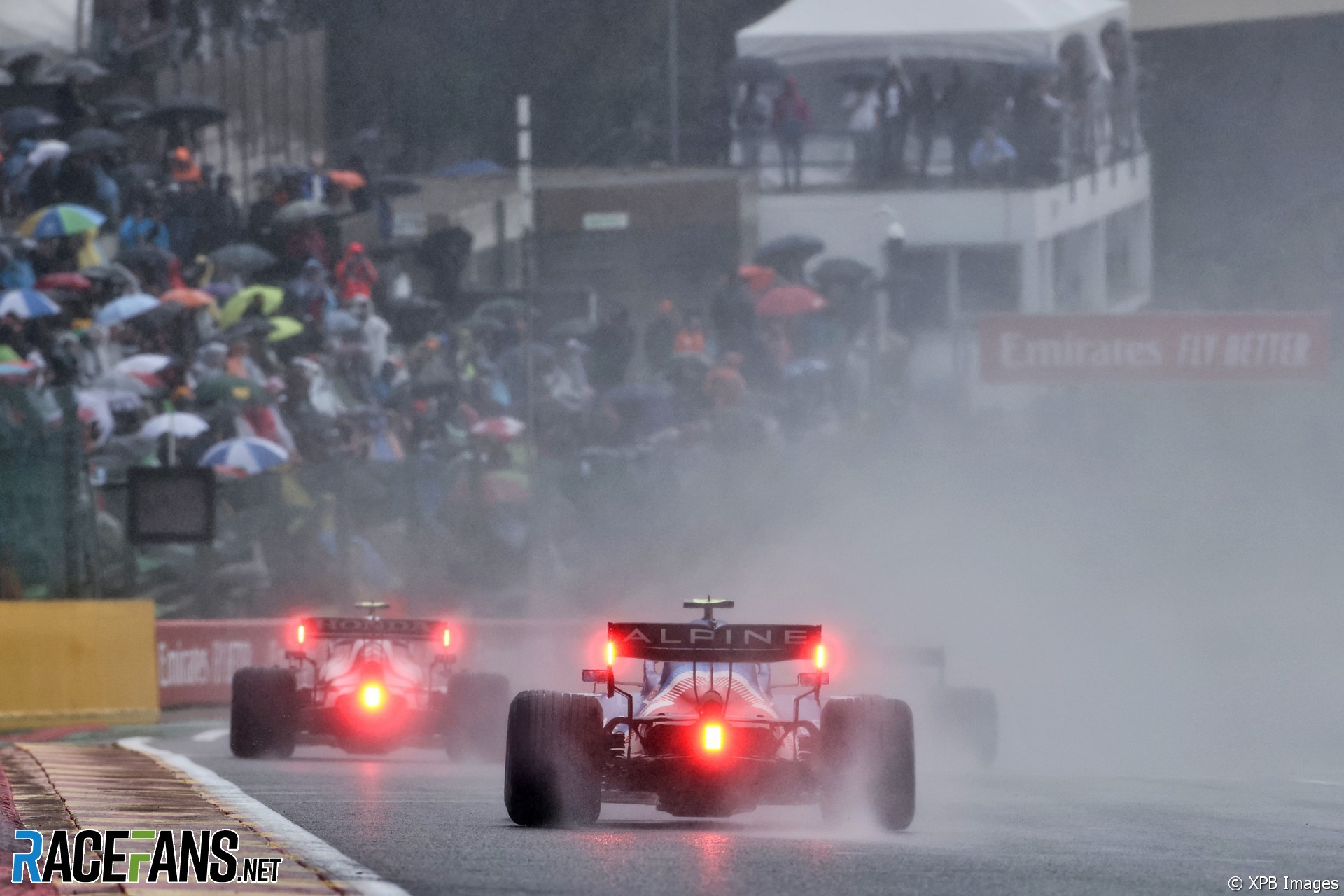 In the round-up: Formula 1’s decision to introduce wider tyres four years ago has made its wet weather visibility problem worse, according to Pirelli.

Pirelli’s head of motorsport Mario Isola says this has increased the volume of water the tyres can lift by over 40%. This has made visibility during wet races worse. Earlier this year the Belgian Grand Prix was abandoned and the result declared based on a single lap of running behind the Safety Car due to poor visibility in persistent rain.

Isola said Pirelli is in discussions over what it might do to improve the situation, but admitted the wider tyres have added to the problem. “Nobody wants to see another Spa,” Isola acknolwedged. “[But] on the tyre side, there is very little we can do because tyres are designed to guarantee the crossover between the wet and intermediate. Moving this design target is is not ideal because then you can create a gap and, in any case, also making a tyre that is more able to disperse water.

“But if you disperse all that, the water is flying and the visibility become worse and worse. So we are not fixing the issue, we are probably making the issue worse.

“I don’t know what we can do in terms of tyres. The fact that in 2017 we’ve introduced a wider tires are also increasing this water that is flying. The old tyre, the old wet was able to disperse 60 litres per second at 300kph, now we are going up to 85 and obviously it’s more water that is flying. Unless we don’t find a way to block the water and avoid this spray and limiting visibility, I really don’t know what we can do, I don’t have a solution for that.”

Aston Martin CEO Otmar Szafnauer says his role in charge of the Formula 1 team will be unaffected by the arrival of Martin Whitmarsh this month. However he admitted some details are yet to be worked out around the arrival of the former McLaren team principal.

“My role won’t change,” Szafnauer explained. “Martin will be Group CEO, ‘group’ means that we’re going to start some applied technologies-type businesses called Aston Martin Performance Technologies, utilising the [intellectual property] and the developments of Formula 1 and applying them to other industries.

“He was there at McLaren when they started doing that. So he’s got that experience and he can lead us to shortcuts in doing that. He’s also had seven years now of boat racing experience, including starting a new company that is taking technologies from boat racing and moving that technology into cargo ships.”

Whitmarsh’s role “will also include the F1 team”, said Szafnauer, “so the F1 team will report through Martin.” Asked whether Whitmarsh will leave him in entirely charge of the F1 operation Szafnauer said “that stuff hasn’t been planned yet, so we’ll see how it goes.”

One out, one to go! Been a bit lost this past week because I was getting my first post-season surgery. Finally took out the titanium intramedular nail that was in my right tibia since last year. Everything went well, thanks for all your wishes 🙌 pic.twitter.com/khkf2FAdCH

"I think it’s possible, but the limited time window from the scheduling standpoint is really the challenge. You start getting too far after the (F1) race, and it gets real hot in Miami in the summertime."

Amnesty International UK CEO, Sacha Deshmukh: "It’s no secret that rich countries in the Middle East see top-level sport as a means to rebrand and sportswash their images, and a grand prix in Qatar would be more of the same."

"For everyone that's a dream position to be in. It was just never really fully on the cards for me. I'll never know fully exactly why, but I wish them all the best and I'm going to spend the next bit of my time stopping them from winning the championship!"

Ferrari: "I don't like the fact that Michael (Schumacher) is being talked about today as if he had passed away."

"Did I get any marks just because I am a Formula 1 driver? No. It's hard to tell what other people have in their heads. But several times I had problems due to omissions, bad grades in some subjects. And I understood that this was a chance to fly out."

"We struggled a bit as a team in general Spa, but we kept on working together and we managed to get some points out of a difficult situation. That’s something that we can take with us."

"Motorsport UK is pleased to announce seven of the world’s top single-seater teams to be racing in the F4 British Championship certified by FIA in 2022. Entries from Argenti Motorsport, Carlin, Chris Dittmann Racing, Fortec, Hitech Grand Prix, JHR and Virtuosi Racing are among the first to be confirmed on next year’s grid."

"At the closing date for entries, the number of participants in the 2021 FIA Karting European Championship – Superkart had not reached the minimum required for the title to be awarded."

"W Series will make bold statements in pink both online and on-track – highlighting a different breast cancer charity during each week of October, sharing special content featuring W Series’ drivers and staff, and giving the liveries of our racing cars a pink update for the final round of the season at the Circuit of the Americas, Austin, Texas, USA on 23 and 24 October."

Should Formula 1 have stiffer deterrents to prevent interference in the championship?

This is all assuming that these races will be without incidents, yet I’m rather doubtful about exactly that.

Could be Verstappen, Hamilton, Bottas (again), Perez or even a satellite driver making a wrong decision at the wrong moment, or having a ‘tactical’ go at the opponents car(s).

I would like to see the FIA introduce progressive penalties. Punting a car of in the first race of the season unless blatantly on purpose, should possibly not be penalised as heavily as when done in the last race of the season, and also with the amount of influence on the championship standings in mind, causing a collision with a backmarker might be punished less heavily than with the championship leader.

Oh, FIA, before you think it’s an idea, introduce it at the beginning of a season please, and not halfway through.
Coventry Climax