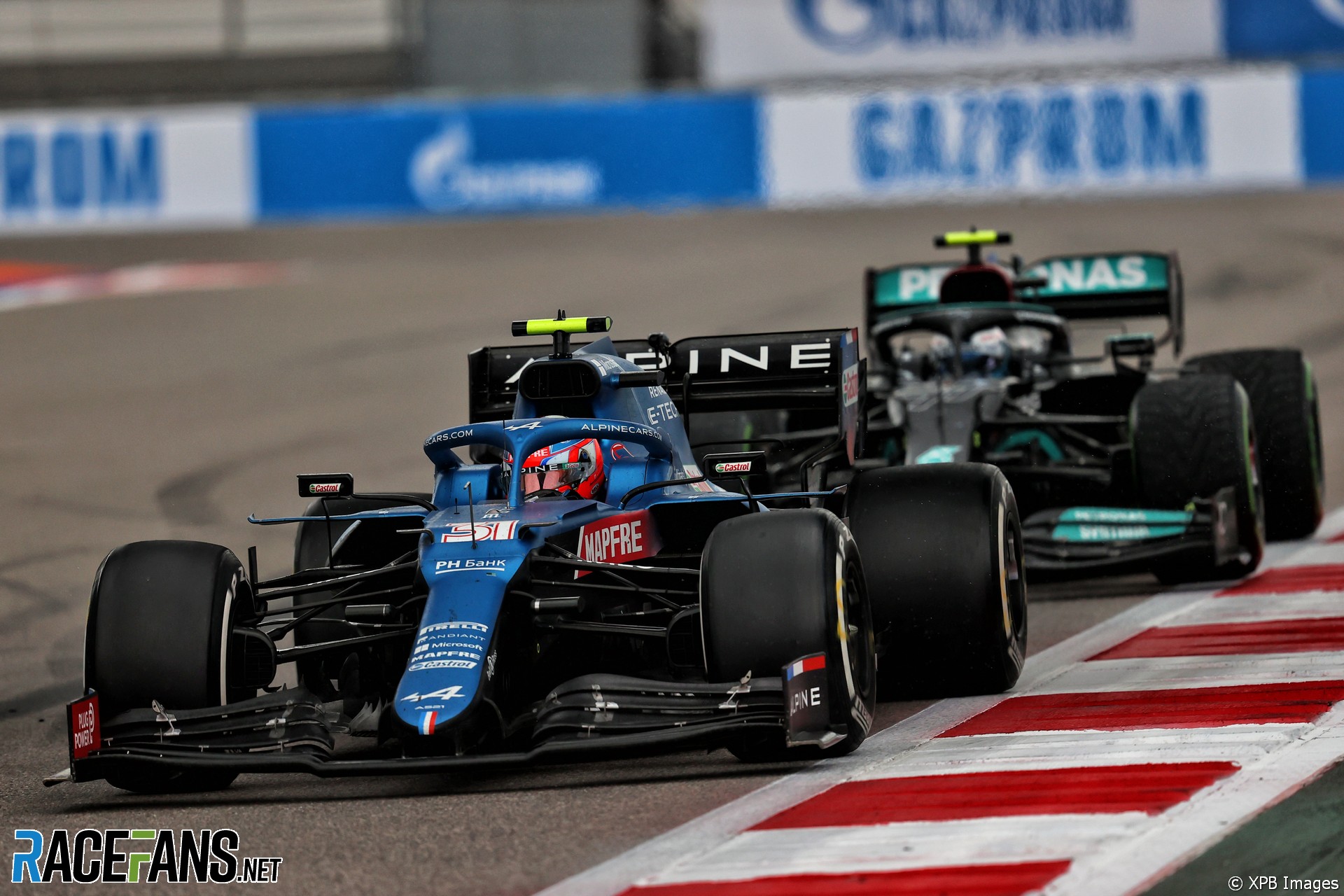 In the round-up: Esteban Ocon revealed he pursued a different set-up direction to team mate Fernando Alonso at the Russian Grand Prix.

Having qualified behind Alonso and run outside of the points for much of last week’s race, Ocon revealed he had taken a different approach with his set up at the Russian Grand Prix.

“The cars were very similar in terms of set-up in the last three or four races,” said the Hungarian Grand Prix winner. “Pretty much identical.

“It’s been quite a lot of deviation in this race and we don’t have the same comments any more from this race on.”

Ocon said he suspected these changes were why he had a less successful weekend than his team mate, who took sixth in the race. “We have a couple of ideas on what it could be, just looking at fixing it, obviously, for the next race.

Second year on support bill for W Series under consideration

Formula 1 CEO Stefano Domenicali says the sport is considering whether W Series will remain on its support bill for a second year in 2022.

“It’s still part of the discussion,” he said in Sochi. “We are preparing the full calendar because as you know, the F1 weekend is getting, thanks God I would say, very intense in terms of action for all the people that are attending to the races. It’s part of the discussion about having to have still ‘formula W’ with us.”

"When he was in a Lotus next to world champion Kimi Raikkonen, Romain was beating Kimi and what did he get, six, seven, eight podiums, and almost won some races. I think the one thing that is incorrect is I think some people think IndyCar’s easier because they go, ‘Well, Romain was 18th and now he’s running at the front’. His car was 18th in Formula 1."

Bruno Michel's Guest Column: If he continues this form, Pourchaire could join the title race (Formula 2)

"Pourchaire has adapted to F2 with ease. He is currently fifth in the Championship, just 22 points behind Zhou in second. If the Frenchman brings this form to the final two rounds of the season, he could join the title race."

Could partially enclosing the wheels be a solution to Formula 1’s wet weather visibility problem?

It’s not practical to have narrower tyres only for the wet, as the aero will be heavily and randomly compromised. And narrower tyres in all weather conditions reduces mechanical grip, increasing sensitivity to aero loss when following other cars.

F1 really must consider enforcing the fitment of aero pods behind the rear tyres, like IndyCar and Formula E used to run about five years ago. I think they got rid of them because they kept being knocked off. What they should have done was simply make them stronger! I think in both series, overtaking became more difficult after the pods were outlawed.

Rear pods have many advantages:
1. Particularly when combined with flick ups in front of the rear tyres, they can massively reduce turbulence, allowing cars to follow much closer without losing downforce.
2. In the event of another car running into the back of another, sufficiently strong rear pods can help prevent the impacting car from flying into the air, as it will contact stationary carbon fibre instead of sticky rubber travelling upwards at 200mph. Monza showed how dangerous this can be at only 30mph. At 200mph, spectators are at significant risk, as fencing is not that high in F1.
3. They will reduce spray kicked up when it’s raining. This enables safer racing in more extreme conditions, which is entertaining, challenging for the drivers, and keeps TV schedulers and race promoters happy.
4. They will reduce the amount of debris flicked up by the rear tyres. We nearly lost Senna in 1987 Silverstone practice when this happened, and drivers sometimes complain of stones hitting their knuckles.

Obviously these have always been outweighed by the disadvantages:
1. They go against the DNA of F1, which has remained completely unchanged for over a century.
2. The cars will no longer be open wheel single seaters, just like IndyCar and Formula E stopped being them five years ago.
3. It’ll be slightly harder to see the wheels go round and round.

The four advantages help address the sport’s most significant remaining safety risks, and make it a much more entertaining sport. This is the answer to Pirelli’s problem and several others.
Alesici