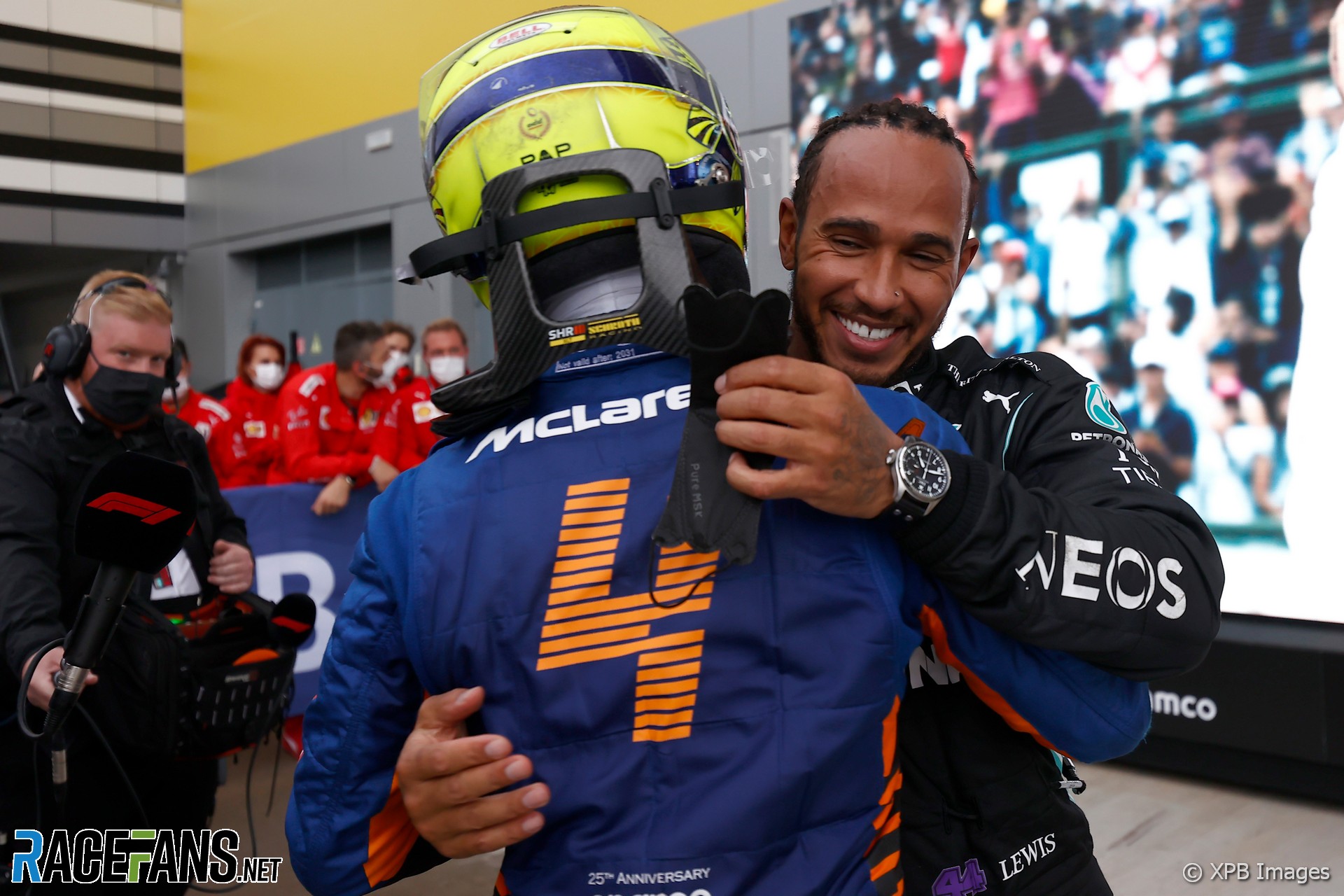 In the round-up: Lando Norris says he was especially grateful for Lewis Hamilton’s sympathetic words after he missed out on victory in the Russian Grand Prix.

Hamilton praised Norris after the McLaren driver narrowly lose victory at the last round of the championship in Sochi. Norris told ITV’s This Morning he was grateful for the sympathy from a driver he “looked up to” early in his career

“Coming from Lewis, because he was the guy I watched growing up – and he’s Lewis, a seven-time world champion – to hear what he had to say because he’s been through many scenarios, probably even worse in some cases but I guess in my way it feels worse because it’s that first win that you just want to really get…

“Many drivers said I did a good job and my time will come which I obviously head a lot of. But when it comes from someone that you looked up to or you know has been through it then it definitely means a bit more.”

Triple-headers acceptable if we have stable calendar – Steiner

Haas team principal Guenther Steiner is prepared to accept more triple-header rounds on the 2022 F1 calendar providing the sport can stick to its schedule for the first time since 2019. The last two championships have been disrupted due to the pandemic.

“My first wish is that the pandemic goes away, not only for Formula 1 but the world,” said Steiner. That people are not dying or getting sick from Covid anymore and that we can all return to a normal life.

Formula E reported a cumulative audience of 316 million viewers for its 2021 season, a 32% rise compared to the previous championship, which was severely curtailed due to the pandemic. It credited the increase to changes in its broadcasting arrangements in markets including the UK, USA, Germany, Italy, France, Brazil and Indonesia. Its races on the British free-to-air channels BBC2 and Channel 4 yielded its largest audiences to date in the country.

Mission 44, the foundation established by Lewis Hamilton to promoting young people from under-represented backgrounds, has begun a two-year partnership with Teach First to recruit 150 black teachers in science, technology, engineering and mathematics.

“Our work with Teach First is another step towards addressing barriers preventing young black students’ engagement with STEM, as identified in The Hamilton Commission report,” said Hamilton.

“We know representation and role models are important across all aspects of society, but especially when it comes to supporting young people’s development. By establishing this partnership, which focuses on identifying the best way to attract black talent to STEM teaching roles, we hope to create a framework the wider education industry can implement. It’s our hope other organisations recruiting teachers will support and join us on our mission to see more diversity in the classroom.”

Flying hasn’t always been nice to my left hand but today I had a painless flight. And that feels good 🙏🏻 pic.twitter.com/49yYbHXiKF

Toto Wolff: "It's a possibility. When, and how, is not yet decided."

"Singtel has picked up Formula 1 motor racing rights in Singapore for the remainder of the 2021 season and the full 2022 season. The rights across 26 territories had previously been held by pan-regional Fox Sports Asia which shut down with effect from October 1st following a decision by owner Disney to cut its linear TV operations and to focus more instead on direct-to-consumer streaming businesses Disney Plus And Disney Plus Hotstar."

"“The very first helmet that me and my dad made at home had a Simpson’s cartoon character on the back saying ‘kiss my a**.’ That was quite funny, but eventually, we had to change it. It was a bit too silly."

"The main feature of these directives will be the implementation of a limit on the number of single-seaters on the grid and per team. Consequently, the total number of vehicles participating on the grid per event will not exceed twenty-eight entries, setting the limit of seats per team at four."

Red Bull's efforts to prompt the FIA to look into a technique Mercedes used to cool its engine have not been successful.

The creeping realisation sprint races are here to stay has disappointed many but surprised few:

All those comments I replied to at the start of the year “why don’t we give it a go” etc. Those of us with half a brain knew it was already decided, just like DRS was an experiment that could be reversed, which it never will be.

The biggest surprise for me was that this has happened with Domenicali in charge, didn’t think he was the type to weasel something in by patronising us all. Oh well.
@John-h