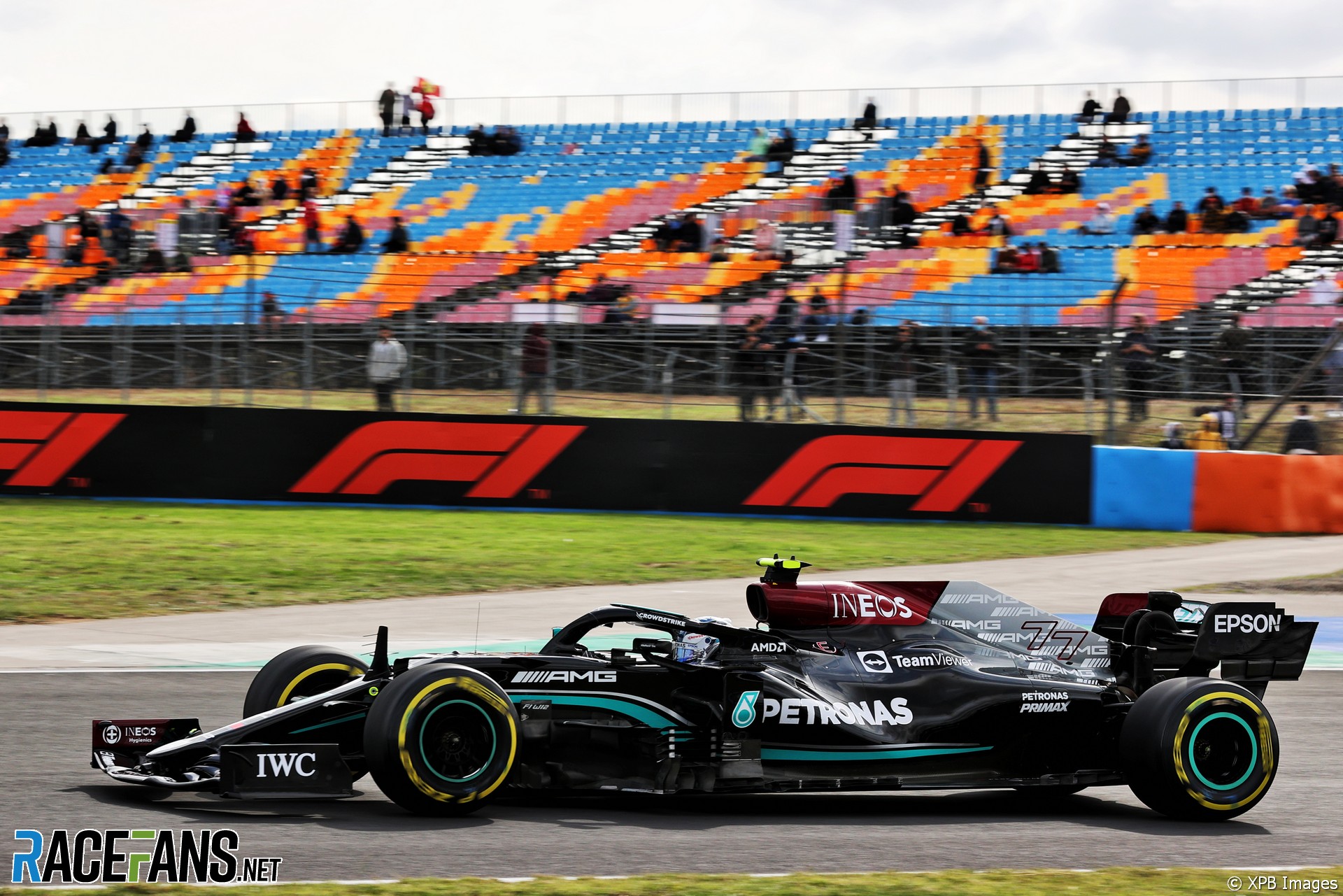 After a dramatic increase in grip compared to last year, and with conditions changing throughout the weekend, teams will need to adapt their strategies on the fly at Istanbul Park.

A somewhat shaken-up grid order – due to penalties and a damp qualifying session – means there are several interesting scenarios to play out in Sunday’s race.

The first involved the driver who should have started on pole position. Despite being fastest in Q3, Lewis Hamilton’s grid penalty for taking a fourth internal combustion engine means that he will start 11th. That puts Valtteri Bottas on pole and Max Verstappen alongside him.

Once again, Verstappen won’t have his fellow Red Bull driver as close at hand as he’d like. Sergio Perez will start sixth, though he is at least well-placed to resist Hamilton’s efforts to charge up the order.

Bottas will clearly want to hold off Verstappen for the win but Mercedes say he won’t be asked to back the pack up. “Valtteri’s going to race his race tomorrow,” said team principal Toto Wolff. “This is about the race win and Valtteri’s win and the team’s win. And we’re not going to do any bunching up.”

However, the Mercedes team boss also acknowledged that there was a risk of Hamilton struggling to move through the pack – and of the lead drivers disappearing up the road. “Yesterday we simulated some of these situations, and it’s very difficult to follow in traffic,” Wolff said.

“It’s a phenomenon that we’ve already seen all year but it could be something that we need to fight tomorrow. So there will be not many options left than to try with strategy and obviously hope that the front train is not disappearing in the distance.”

Hamilton himself acknowledged that “getting past people is not going to be easy,” especially if a DRS train builds up, as happened at Sochi and several other venues this year.

One element that all the teams have as an unknown is tyre wear. Pirelli say they believe a one-stop strategy, switching from medium to hard compound tyres or visa versa, would be possible – but that a two-stop might be faster.

The pit lane time loss at Istanbul is only 20 seconds, which will make an extra pit stop a more tempting option than at other venues. With teams unlikely to use the fragile soft in the race (Yuki Tsunoda, who will start on softs, is a notable exception), strategies will involve juggling the two harder compounds.

“I don’t see anyone using [the soft] apart from right at the very end if someone’s after the fastest lap, maybe,” said Williams’ head of vehicle performance Dave Robson. “Then how many sets of tyres do you need to use of the [hard and medium] to get through?”

Nursing the tyres is tricky at Istanbul as turn eight deals out ferocious punishment to the front-right, and backing off there can bring rivals within range on the straights that follow.

“We’ll wait and see,” said Robson. “I think it will depend on how much time you’re prepared to give up in some of the corners to keep that probably the front right tyre, in particular, alive and avoid running out of rubber completely.”

It’s not hard to imagine one driver who, faced with many places to gain and starting on the same tyres as those ahead of him, will be willing to risk an early switch to a two-stop strategy: Hamilton. Whether Red Bull deploy Perez tactically early on to cover that off will be worth watching for, particularly as the benefit of the ‘undercut’ – being first onto new tyres – is likely to be large.

Robson said he believed the race would be “tough” in strategy terms. “It’s going to be one of those races where there’s some fairly live decisions to be made.” Williams themselves have proven they can make the right calls, recently – but not every team has, when offered a sudden decision.

Tsunoda, starting on his softs, will probably be pushed to a two-stop from the outset. That might provide some early advantage to the rookie, if he can make up places at the beginning of the race. His likely early pit stop could prompt others to pit in reaction, and potentially swing more drivers towards pitting twice. This carries with it a further potential risk, as we’ve seen a few sloppy pit stops since the FIA’s technical directive ahead of the Belgian Grand Prix, particularly on the Red Bull side.

Tsunoda will start ninth on the preferable side of the grid. directly him lies Hamilton, who will have to decide how much he wants to gamble against the relatively untested rookie.

Verstappen, who starts on the off-line side of the grid, was not optimistic about getting a good launch, no doubt remembering the trouble he encountered in the grip-less conditions last year. “I don’t think that’s a great place to start on the inside because there’s no grip on the inside line, so we’ll see how that goes,” he said, pessimistically.

The Red Bull driver further downplayed his chances against Mercedes saying bluntly “no” as to whether he could equal them on race pace. “But we will of course just try to follow and see what we can do and see what happens in the race in general,” said Verstappen.

A final factor to throw question marks over teams’ calls is that there’s a chance of rain again on Sunday morning, which should clear up long before the race. Robson said that water on the track on Saturday morning had given it “a bit of a reset” and that, although the race looks set to be dry, the track would once again been green and potentially a bit greasy, as at the start of Q1, when several drivers slipped up.

“Understanding exactly how the tyres are going to work and how the drivers need to approach turn eight, in particular, is going to be a little bit of a voyage of discovery,” said Robson.

Will Bottas take his first win of the season in Turkey? Will Verstappen be back in the lead of the championship come Sunday evening?

Share your views on the Turkish Grand Prix in the comments.

44 comments on “Can Hamilton fight to the front without Bottas bunching the pack up?”