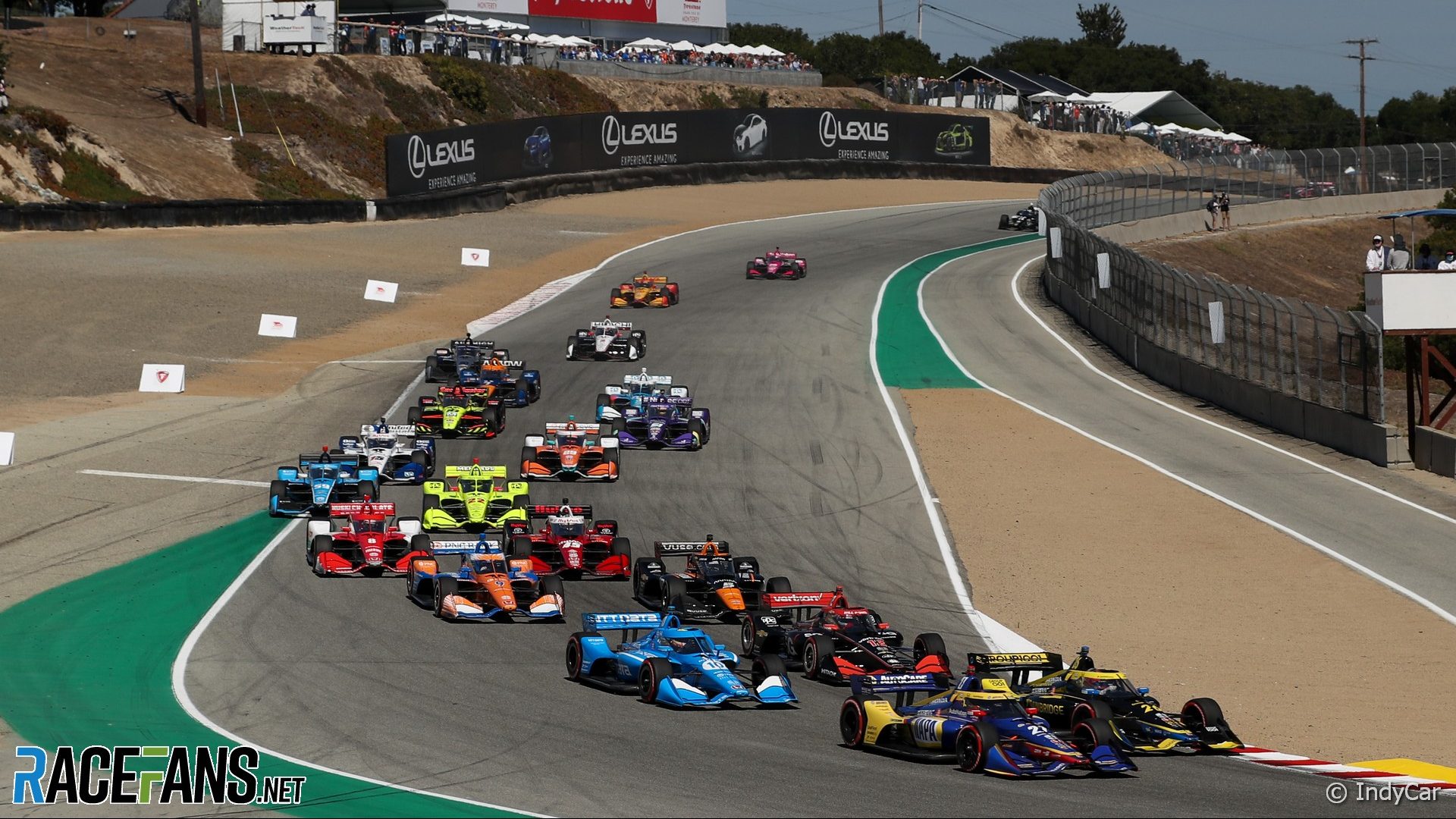 One of those – Álex Palou – steadily emerged from the pack as the season went on. By the time the drivers assembled in Long Beach for the season finale, Palou’s title seemed nailed-on, Pato O’Ward and Josef Newgarden needing lucky turns which never materialised to keep him from the crown.

The ascent of Palou prevented multiple champions Josef Newgarden and Scott Dixon adding to their piles of silverware. Meanwhile the championship also welcomed ex-Formula 1 driver Romain Grosjean and saw one of his predecessors, Marcus Ericsson, deliver his first victories.

Which among them and their rivals had the best campaigns in 2021? Here’s our verdict:

Harvey was unlucky not to reach the podium more than once this season – race two at Texas, the Indianapolis GP in May, and Road America are the most obvious examples. But on many weekends, he and the number 60 Meyer Shank Racing team soundly outperformed most of the drivers at Andretti Autosport, from which MSR receives technical support.

He finished 2021 with four top-10 finishes in the last five races, bringing him to 13th in the final standings. He had two fourth-place finishes (St. Petersburg and Portland) and made the Fast Six phase of qualifying four times.

He leaves MSR for Rahal Letterman Lanigan after five seasons (two of them full-time) with both he and the team in a stronger position than when they both began their IndyCar journeys in 2017. Next year, MSR will field two full-time entries for reigning and four-time Indy 500 winner Hélio Castroneves, and Simon Pagenaud, newly acquired from Penske this off-season. Their ability to attract two prolific veteran drivers is a testament to the progress that MSR – and their departing, cornerstone driver – have made along the way.

The 2021 season represented a pronounced decline for Power, who finished ninth in the championship, his lowest placement since joining Penske as a full-time driver in 2010. But even if he is in decline, Power was still a productive driver this season.

After narrowly escaping the humiliation of being bumped from the Indianapolis 500 field, Power surged back into form after the mid-season break. He won the second race at Indianapolis this August then took another pole position at Gateway the following week. He finished the year with four podiums, came within half a second of denying Palou the victory in the opening round at Barber and, of course, lost a nailed-on victory at Detroit due to an overheating problem during a red flag period.

It’s likely that the two-year contract extension Power signed in April will be his last full-time IndyCar contract, one that will see him flying the flag for Team Penske until the end of 2023.

It was another quietly productive if unspectacular season for second-generation driver Rahal in 2021. He still hasn’t won a race since sweeping the 2017 Detroit Grand Prix, and he only finished on the podium once this year, finishing third at the second race in Texas.

His qualifying form continued to be bang-on average, only reaching the final phase of qualifying twice all season. But Rahal consistently fought his way into the top half of the field whenever he could: He finished the year with seven top-fives, 11 top-tens and only two retirements – both caused by accidents that weren’t his fault.

This consistency was one of Rahal’s best traits when he was fighting for championships from 2015 to 2017, and if he can maintain that consistency while being able to qualify near the front at a higher rate, it shouldn’t be long before Rahal finds his way back to the top step of the podium. Additional motivation may come in the form of two new full-time team mates at RLL next year: Harvey, and another driver to be named later.

Ericsson took the initiative and began to rewrite the narrative of his racing career in 2021. While he was more than a bit lucky to end up leading and win the first race at Detroit, and again at Nashville, he did not falter once he found himself at the front of the field.

There was more evidence to suggest Ericsson’s breakthrough season wasn’t a fluke. He almost came from behind to win at Mid-Ohio, he scored 12 top-ten finishes, matching his total over his first two seasons. After being within striking distance of the top of the championship table, Ericsson was unlucky to drop to sixth in the final standings following his only retirement at Long Beach.

Ericsson is now looking more and more like the worthy protegé of Indy 500 winner Kenny Bräck as he gains experience. He is not yet officially confirmed at Chip Ganassi Racing for 2022, but it would be a startling development if he ended up elsewhere by the time the 2022 season begins in February.

While on the subject of F1 veterans that have found new life in IndyCar, Romain Grosjean’s embrace of American racing and his concurrent return to competitive form were one of the feel-good stories of this season. Staking his claim as IndyCar’s “people’s champion” of 2021, Grosjean picked up three podiums – two runner-up finishes at the Indianapolis road course, and a hard-fought third at Laguna Seca.

He won his first pole at the Indianapolis GP in May. Despite running just 13 out of 16 races, Grosjean finished just 33 points behind Scott McLaughlin for the IndyCar Rookie of the Year Award. And he looked confident in his first oval race at Gateway.

There were flare-ups of rookie growing pains and bad luck, but on the whole, Grosjean’s performances at Dale Coyne Racing in 2021 gave Andretti Autosport enough assurance to make him their high-profile free agent signing of the off-season. Next year, Grosjean has a legitimate chance to compete for a championship, as he’ll run the full 17-race schedule – including the Indianapolis 500.

Remarkably, despite winning six IndyCar series titles, Dixon has still never successfully defended any of them, a trend which continued in 2021. He also missed his chance to claim a second Indianapolis 500 victory after qualifying on pole position.

He won just once this year – a dominant victory in race one at Texas – compared to four times in 2021. And yet, because he is Dixon, a disappointing season by his standards still meant leading more laps than any other driver. It meant that he won a race for the 16th year in a row, finished in the top four in the championship table for the 15th time in those 16 years, scored five podiums and 12 top-tens, had a car that was fast enough to win the Indy 500, and took the chequered flag in every race but one – when he was collected in a crash at Gateway.

Because he’s Scott Dixon, it wouldn’t be a massive shock if he were to strike back against his new champion team mate Palou and win his record-equalling seventh national title in 2022.

The 2021 season played out a lot like 2020 for Penske driver Josef Newgarden, finishing the year strong to snatch second place in the series championship after fits of poor fortune in the first half of the year. The year was best remembered for the stretch of misfortune that saw victories at Detroit race two and Road America slip away in the closing laps, before finally getting to the top step with victories at Mid-Ohio and Gateway.

Newgarden was once again the star performer at Penske this season. He won four pole positions – the most any driver managed – collected six podiums and 13 top-ten finishes, and led the third most laps. His only retirement came when he crashed on the first lap of the first race at Barber.

If not for that, or the gear selection glitch at Road America, Newgarden may have been able to win his third championship in five years since joining Penske. That third crown will be among the main goals for Newgarden as he begins his tenth season, that much is certain. But he would also like to check off the one box that’s missing from his CV: and win the Indianapolis 500.

McLaren Racing CEO Zak Brown compared his star driver “Pato” O’Ward to a young Juan Pablo Montoya after O’Ward tore through the field late in the second race at Detroit to take his second win of the season. His ruthless, aggressive style was on display there – and in the second race at Texas, where he took his first career win with a late overtake for the lead.

He was unlucky to drop to third in the final championship standings after a DNF in Long Beach, after leading the points after two races and seeming set to finish runner-up in the table. O’Ward has now finished in the top four in each of his two seasons at McLaren SP. And the quantum leap forward that O’Ward and his McLaren SP crew took in 2021 seems all the more remarkable, when considering that his team mate, Felix Rosenqvist, struggled to find his form for most of the season.

If O’Ward can address his areas of opportunity with tyre management – and at 22 years old, he still has plenty of time to solve that puzzle – multiple IndyCar titles should follow in the years to come.

Without question Herta was the strongest front-runner in IndyCar this season. He demonstrated as such with dominant pole-to-win victories at St. Petersburg and Laguna Seca. But he also showed that he’s not just a strong front-runner, by charging from 14th to win the finale at Long Beach, giving him his third win of 2021, tied for the most wins of any driver this season.

Only Dixon led more laps this year than Herta, and only Newgarden and O’Ward had as many pole positions. Just like O’Ward at McLaren SP, Herta’s successes are highlighted in stark contrast to the lacklustre form of his three team mates at Andretti Autosport. Here is one of IndyCar’s ‘big three’ organisations, and the 21-year-old wunderkind Herta is carrying them on his shoulders virtually every weekend.

Herta’s championship hopes evaporated over the course of four costly retirements. Of those, only the unforced accident at Nashville – where he dominated most of the weekend – could be totally blamed on driver error. A middling 16th place finish at the Indy 500 didn’t help much either, of course. But he’s so close to being the complete package already, needing just a little better execution over the season to take the next step into being an elite driver and perennial championship contender.

The year began with a first win at Barber. He also won at Road America after inheriting the lead with two laps left, and then in a must-win situation after consecutive DNFs, came back from an early end-of-line penalty to win at Portland.

Palou’s positive demeanour never wavered, even after the DNFs, even after multiple grid penalties left him with a harder job on some weekends to fight back into contention, or any other time when it seemed like the title might slip from his grasp. He drove like a worthy champion all season long.

The only thing that would have made Palou’s breakout 2021 campaign even sweeter, is if he had been able to get past Hélio Castroneves in the last laps to win the Indianapolis 500 in his sophomore season. Or, perhaps, even a wet weather race for him to demonstrate his superb rain driving prowess that he showcased in GP3 and Super Formula.

Nonetheless he will face a stern test to defend his title in 2022, given the number of young and experienced drivers that also had a chance this season, or those that are projected to take a step forward in the near future. But even after just one year with an elite team, Álex Palou has demonstrated that he is up to the task, and should be for many more years to come.