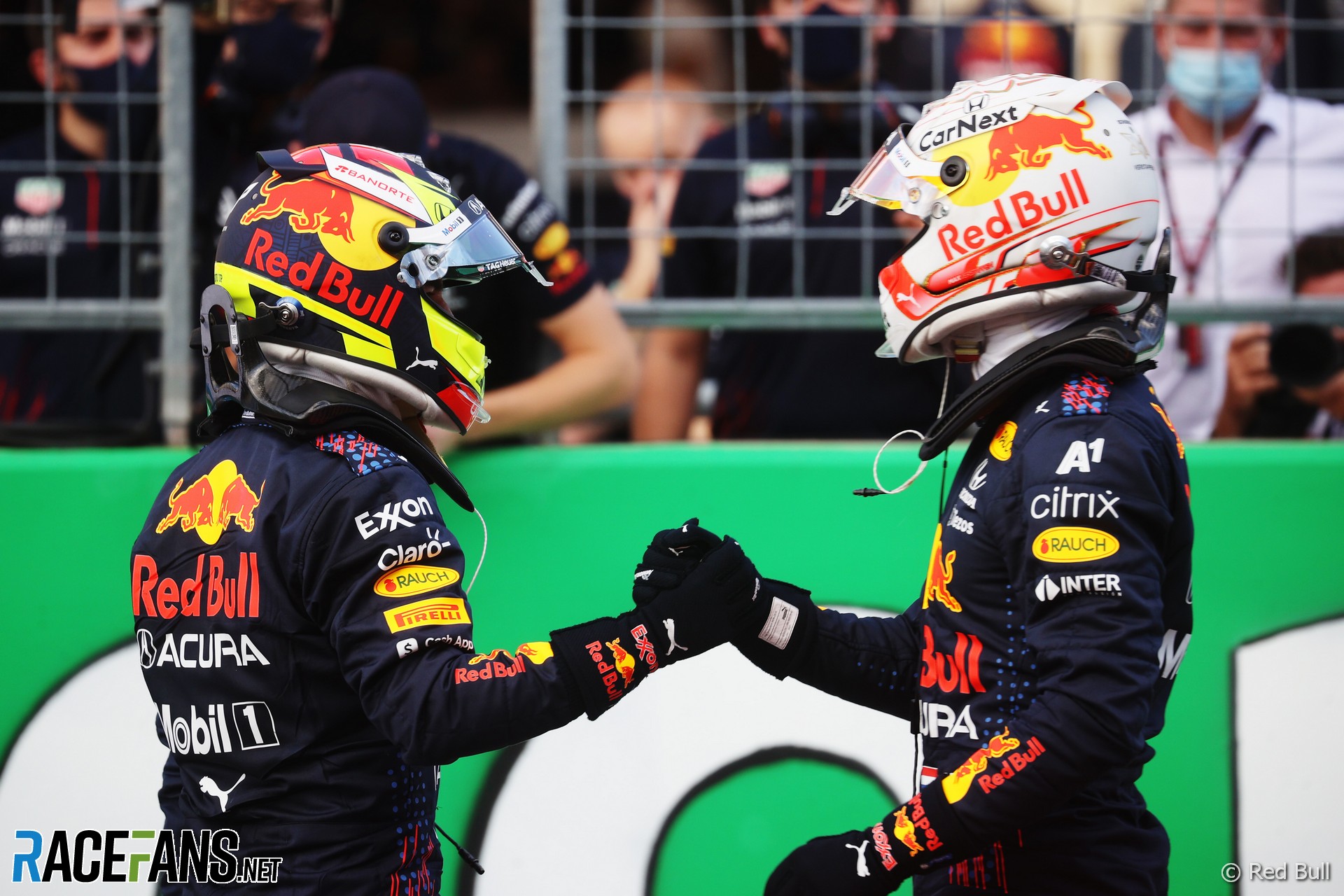 Sergio Perez will arrive at his home race this weekend with a genuine chance of being the first Mexican driver to win their country’s grand prix.

But team mate Max Verstappen’s championship chances come first for their Red Bull team, and that could force them to make a difficult call on Sunday.

A “brutal” call for Red Bull?

Verstappen heads into this weekend’s race with a 12 point lead over Lewis Hamilton in the championship. With 133 points still up for grabs, the title fight remains wide open.

Neither team will want to miss an opportunity to boost their leading drivers’ scores. Yet Red Bull have shown there is a limit to how far they are prepared to go.

In the closing stages at Silverstone they pitted Perez from 10th, giving up a point and potentially more, in order for him to set the fastest lap of the race and therefore deprive Hamilton of a bonus point. Red Bull could have done the same at the last race in Austin, which would have meant dropping Perez from third to fourth behind Charles Leclerc, but decided this was too high a price to pay.

“It would have been brutal to pit Checo and take him off the podium,” said Red Bull team principal Christian Horner. “Leclerc obviously was too close behind. I think the collective position for the team is it’s better for Checo to take the points. So that’s what we did.”

So how would the team handle a scenario where Perez is leading in the final laps at the Autodromo Hermanos Rodriguez on Sunday with Verstappen behind him? It’s hard to imagine Red Bull would turn down a seven-point swing in Verstappen’s favour in the drivers’ championship at no cost to their constructors’ tally.

That conversation has surely already taken place within Red Bull. But that doesn’t mean the team won’t be hoping the situation doesn’t arise. Perez enjoys the kind of huge, vocal support at this race that his team mate had at Zandvoort a few months ago, and a surrendered home win would not be popular.

But Red Bull can feel optimistic it won’t come to that. Verstappen has dominated his team mate this season. In his five appearances at home so far Perez has only been the first of his team’s drivers home once. There’s a good chance Perez won’t have to do as Felipe Massa did at Interlagos 14 years ago, and give up a home win to help his team mate win the championship.

Mexico City has not been an especially strong venue for Mercedes, who tend not to perform as well at the unusually high altitude track. All teams feel the consequences of the 25% reduction in air pressure which cuts downforce, decreases engine performance and inhibits cooling. But Mercedes seem to be especially vulnerable to its effects.

True, Mercedes won the last race at this track in 2019, last year’s event being cancelled due to the pandemic. But Verstappen would have taken pole position had it not been for a yellow flag infringement, and he clearly had the pace to win the race for the third year in a row. This looks like a venue where Red Bull can entertain serious hopes of scoring their first one-two of the season.

For the championship contenders, the imperative need to avoid a retirement couldn’t be clearer at this stage in proceedings.

Consider Hamilton’s position: If he fails to finish and Verstappen bags a maximum score, the Red Bull driver can assure himself of the title by taking second place in all the remaining races (including Brazil’s sprint qualifying round, which pays extra). That would be a significant milestone for Verstappen in a season where he’s finished no lower than second in every race besides those where he’s suffered some kind of misfortune.

It goes both ways, of course: A retirement for Verstappen, or a repeat of his poor result from his last appearance at this track, could see Hamilton head to Brazil back in the lead of the championship.

Since introducing a new power unit in Russia, Ferrari have trimmed McLaren’s points lead, and are well placed to overhaul them this weekend. The two teams are separated by just three-and-a-half points in the fight for ‘best of the rest’ honours behind Mercedes and Red Bull.

The particular challenges of Mexico’s circuit don’t play solely to the strengths of either car. Long straights and high top speeds should suit the McLaren. However the corners are mostly very slow and the grip levels are poor, which suits the Ferrari as Monaco and Baku showed.

It looks like being an contest between the two teams again, with potentially another cameo appearance from Pierre Gasly’s AlphaTauri to further enliven proceedings.

Fernando Alonso increasingly seems to be on a one-man mission to demand race control and the stewards enforce letter-of-the-law penalties for breaches of the sporting regulations, particularly relating to track limits.

His frustration at seeing Kimi Raikkonen sweep past him on the outside of turn one at the last race was not hard to understand. Alonso also claimed – again – that rival drivers had used the run-off area at the same corner to gain positions at the start.

There are many points on the Autodromo Hermanos Rodriguez where drivers can run wide without penalty, but over the years F1 has imposed track limits restrictions to prevent them gaining an advantage. These are at turns one, two, three, eight and 11. If any scope for gain remains, expect the sharp-eyed Alonso to be the first to spot it.

Six years on from F1’s first race at the remodelled Autodromo Hermanos Rodriguez, the drastic changes made to the circuit for the series’ return contrast sharply with the more sympathetic alterations made for the same reason at Zandvoort, which welcomed the sport back this year.

Many of the Dutch track’s corners were kept intact and its challenging mix of grass and gravel run-off retained. Mexico’s circuit was treated completely differently: almost every corner was made slower and asphalt run-offs widely installed.

While corners like the fearsome Peraltada were always likely to face the chop, couldn’t more of the rhythm and flow of the Mexican track have been retained? Even given the limited room for run-off (also a challenge at Zandvoort) it feels unnecessarily tight and slow in places, notably at turns two, three, five and six.

The reduced grip due to the altitude does not help, of course. Teams run Monaco-style maximum downforce configurations in Mexico, but the lower air pressure means they generate less downforce than their slim Monza wings.

Are you going to the Mexico City Grand Prix?

If you’re heading to Mexico for this weekend’s race, we want to hear from you:

Who do you think will be the team to beat in the Mexico City Grand Prix? Have your say below.

27 comments on “Would Perez give up home victory for Verstappen? Mexico City GP talking points”