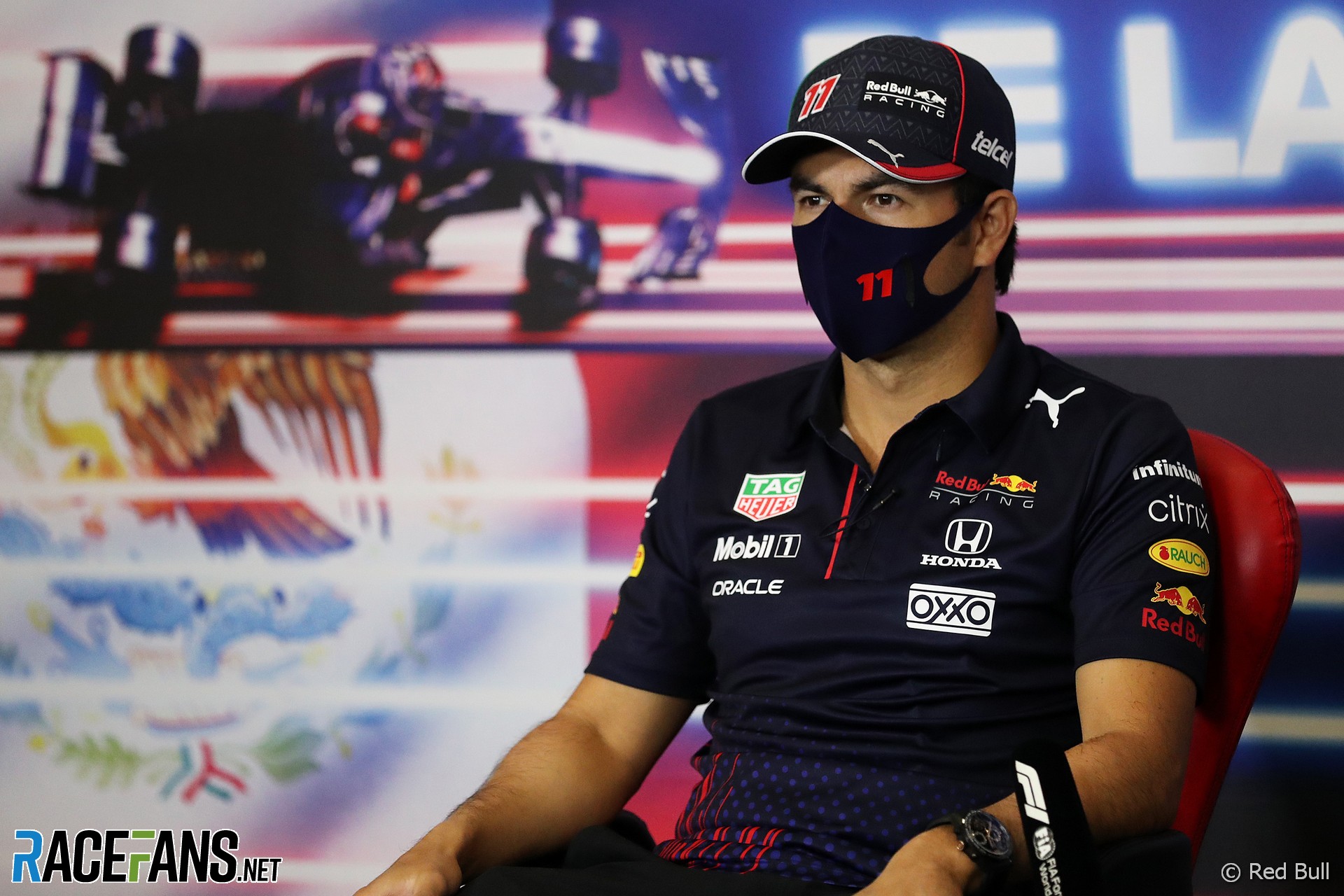 Sergio Perez refused to be drawn on whether he would give up a chance to win his home race in order to help his team mate’s championship chances this weekend.

The Red Bull driver, who won the Azerbaijan Grand Prix earlier this year, has the chance to be the first Mexican to win their home Formula 1 race.

However with team mate Max Verstappen leading the championship Perez, who is mathematically out of contention, could be asked by his team to give up victory if he is leading his team mate in the closing stages of Sunday’s race.

Speaking in Sunday’s press conference at Autodromo Hermanos Rodriguez, Perez declined to state whether Red Bull would allow him to win the race ahead of Verstappen.

“I think it would be a great problem to have from my side. But it always depends in the situation because most of the decisions are normally taking during the race, during the heat of the event. So I think that depending on the circumstances, we’ll see. But I’m pretty sure that the whole team, Red Bull, everyone wants me to win this weekend.”

Perez has enjoyed significant home support at the race in the past and a large crowd is expected this weekend. He said Red Bull are as keen as his fans to see him win this weekend.

“I think everyone is so enthusiastic,” said Perez. “Everyone at my team, the crowd. It’s a very special venue for us. It’s a very intense fight. And we’ll see through the race.

“But I’m pretty sure that everyone in the team, if there’s a race they want me to win it’s this one. So I’m sure I have full support from everyone in my team.”

Perez said he doesn’t “see much point in discussing” whether Red Bull will address the possibility of team orders being imposed before the race.

“Probably we’ll see where we are on Saturday and if it’s worthwhile having that conversation,” he said. “But there’s no guarantee that we’re going to be in that position. I think it will be a great problem to have as a team but right now we haven’t discussed anything.”

Daniel Ricciardo, who joined Perez for the first of today’s press conferences, said he wouldn’t be prepared to give up a home win for his team mate.

“Right now, my answer is no, I would not,” said the McLaren driver. “If it was the last race of the season and that position swap literally meant the world title or not, then maybe that’s a more complex decision-making process.

“But a home win, that’s the thing that you dream of as a kid. And if obviously you’ve earned it on track then I feel like it should be yours for the taking.”

A large crowd turned out to see Perez perform a demonstration run at the Paseo de la Reforma in Mexico City yesterday. He said he was “so pleased” to be able to race at home again after last year’s race was cancelled due to the pandemic.

“After a year that we didn’t have a race in my home country I’m very happy to be back. The reception has been incredible, the enthusiasm from the people, really nice.

“Yesterday we were at the Reforma, one of the most iconic streets in Mexico City, a lot of fans there. I’m just so happy to see that people are really enthusiastic about the weekend.

“Everything is sold out. The promoter just told me that he is trying to find a way to put more grandstands but there is no more space. A lot of friends are calling to get them a ticket but I don’t have anything. It’s very cool. It’s a great weekend.”