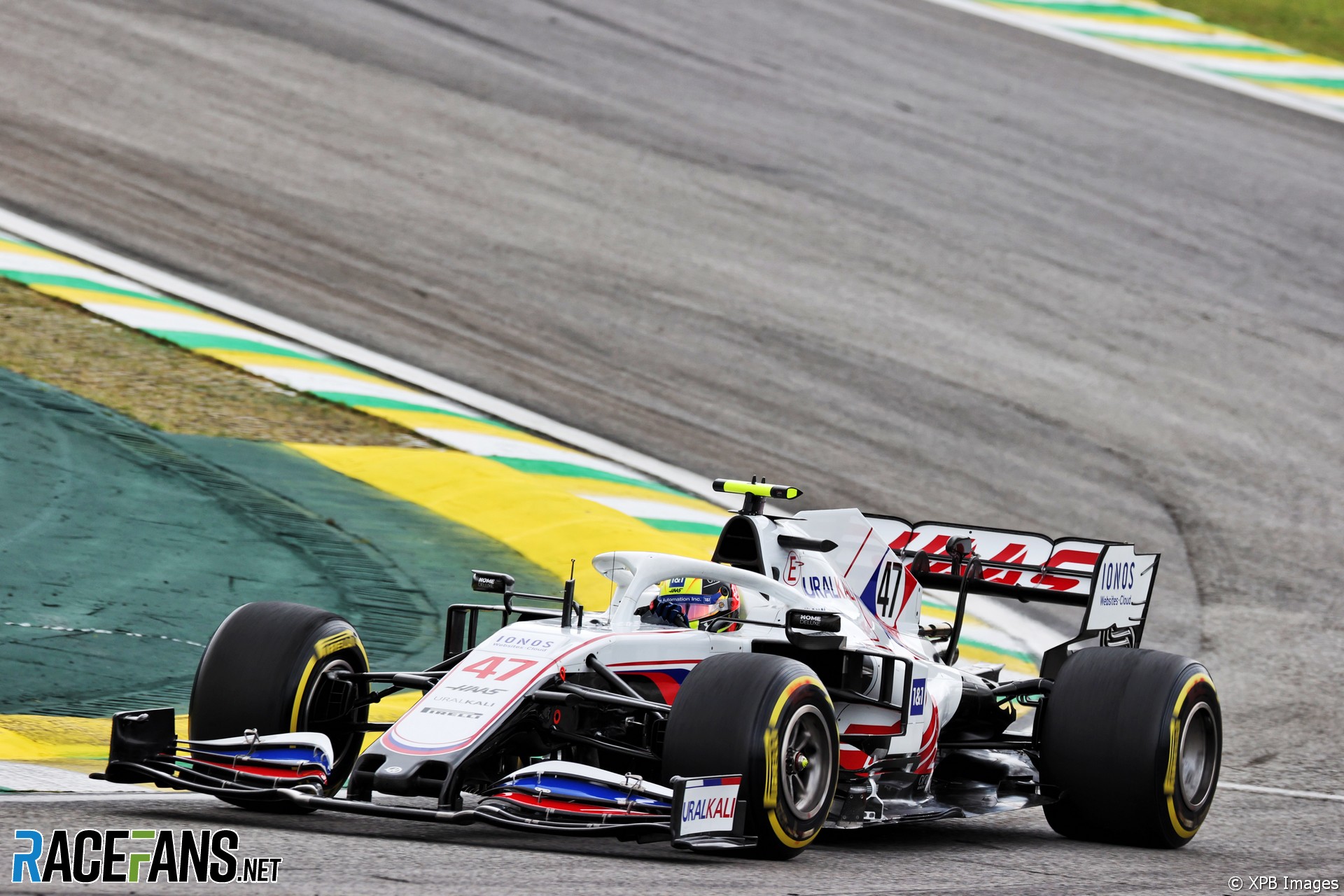 In the round-up: Mick Schumacher said Haas’s hopes of a return to Q2 were dashed in qualifying at Interlagos.

Schumacher: “hopefully next year we’ll be much better prepared”

Mick Schumacher missed out on a place Q2 by seven tenths of a second. The Haas driver’s best lap time in Q1 was deleted due to a track limits infringement, and though it wouldn’t have got him into the next stage of qualifying for the third time this year, it would have brought him within five thousandths of a second of George Russell’s Williams.

The lap “felt good”, said Schumacher, but “unfortunately we didn’t manage to get out of Q1. I think the hopes were high that we [would]. But we’ll live and we’ll learn from those weekends and hopefully next year we’ll be much better prepared.”

Schumacher said that he felt it was “a case of everybody being so compressed, everybody’s so tight together. “Unfortunately, maybe the car just has that little bit of a deficit, and it seems like I couldn’t really do the difference this time.

“But you know, we live and we learn. It’s something to be frustrated about because we still managed to get something out of the car, which felt great. And so hopefully for the race we will be a bit closer.”

Giovinazzi “only had one set” of soft tyres left for Q2

Antonio Giovinazzi set the sixth-fastest time in Q1 but was unable to progress out of Q2. He said “it was a good lap in Q1 but in Q2 we had a lock up in turn one, on my new sets of tyres and then the lap was over.

“But still tomorrow, we have the sprint quali so we will try to gain some positions.”

Giovinazzi said he’d used too many sets earlier in the session session. “We used three sets in Q1 so had nothing left for Q2 so, unfortunately it’s like this. We tried everything in Q1 and so we knew we only had one set.”

Antonelli continues in F4 with Prema

Mercedes junior driver Andrea Kimi Antonelli will drive in Italian Formula 4 full-time in 2022 with Prema, having entered three rounds of the championship with them this year.

Prema’s team principal Angelo Rosin called Antonelli’s potential “remarkable” and said they “cannot wait to see what he will be able to achieve from now on.

“Preparations will be paramount, so we are fully focused on supporting Kimi as he further hones and refines his impressive skills.”

Antonelli was the fastest rookie in four of the races he competed in during his Italian F4 excursions in 2021 and stood on the outright podium three times.

McLaren Racing has appointed its first director of sustainability, alongside becoming a signatory to the United Nations’ Sport for Climate Action Commitment.

Kim Wilson, formerly of EDF Energy, takes up the role at McLaren and will be working on sustainability issues across McLaren’s racing portfolio, which includes IndyCar and Extreme E entries as well as its Formula 1 team. Its UN commitment holds the team to measuring, reducing and reporting the team’s greenhouse gas emissions and to aim to be net carbon zero by 2040, although McLaren itself has already announced an intention to achieve net zero ten years prior to that.

Feel for those poor guys and girls in F1 teams working through the night due to the late arrival of the freight. Middle race in a brutal triple header (Mexico, Brazil & Qatar). Plus, the added headache of a sprint race. Physical and mental health at risk.

Images circulating on social media claiming to show changes to the shape of Spa's Eau Rouge and Raidillon corners for 2022 are not authentic, according to a circuit representative.

Did you know that a driver's visor can be as much of a personal choice as their helmet design? Well, now you do. Tom Clark, @OconEsteban’s performance coach takes us through the ins and outs of driver visors.#BrazilGP pic.twitter.com/d4SFil1Nye

There were some special guests at Fiorano this afternoon 👀

It was a pleasure to have Jean Todt, Mattia Binotto and Benedetto Vigna at the track to meet the #GirlsOnTrack drivers and @WeugMaya this afternoon 🏎#FDA @fia @fiawim pic.twitter.com/5vDE86TQ6E

Raced a world champion in his own car. At a track I don’t know. In the wet. Just waiting for the reserve driver contract to roll in now….. 😅. #formulae pic.twitter.com/5JbM6fhFdf

Alfa-Sauber 2022 with Zhou next to Bottas (Blick - German)

"The die for the new Formula 1 season has been cast: The Chinese Guanyu Zhou (22) will drive alongside team leader Valtteri Bottas (32) for Alfa-Sauber in 2022."

"Starting from the 2022 season, the Italian squad, with its Head Offices in Milan and its Technical Headquarters in Ossona, will add a Formula Regional European Championship by Alpine program to its operation. The new effort will go alongside the long-standing commitments to the FIA Formula 2 Championship and FIA Formula 3 Championship."

I don’t know if it’s because of the weekend format putting qualifying on Friday with a day’s gap before the main race or because of knowing this isn’t what sets the grid for the main race on Sunday but that session was just lacking something and I don’t know if it was just me but even Croft and Brundle sounded less into it than they normally would be for a qualifying session.

Regardless of my feelings about the actual Saturday race I think the biggest downside for me of these sprint weekends has been how it’s altered the feeling and relevance of the other sessions in a way which I feel has been negative. I saw another commenter raise how the flow of the weekend has been altered and I have to say that I think I agree with that and I don’t think that has been a positive change.
@GT-Racer