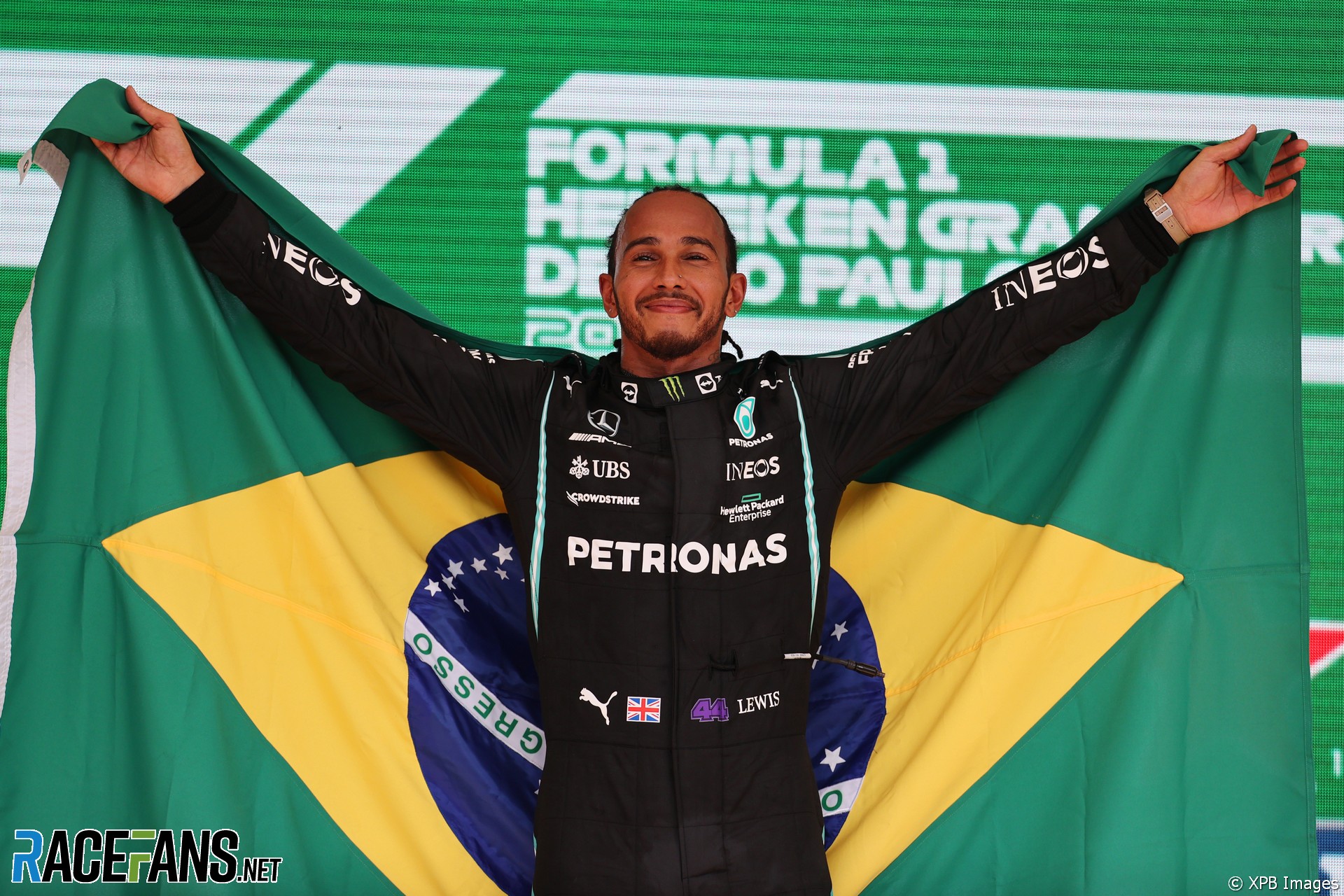 Lewis Hamilton overcame his exclusion from qualifying and five-place grid penalty for the Sao Paulo Grand Prix to claim his sixth victory of 2021 and keep himself in the championship hunt.

After finishing fifth in sprint qualifying, Hamilton lined up from 10th for Sunday’s race as he had a penalty for putting in a new engine for this weekend.

It only took him a lap to get up to sixth, and he then went down the inside of Carlos Sainz Jnr at turn one on lap three to move into fifth. Sainz’s Ferrari team mate Charles Leclerc was the next car he picked off.

Hamilton’s Mercedes team mate Valtteri Bottas soon let him through too. He was now into third behind the Red Bulls of Max Verstappen and Sergio Perez, but there was already a big gap to overcome.

Hamilton’s job was made easier when a lunge by Yuki Tsunoda into Lance Stroll at turn one resulted in his front wing behind left behind on the track and the Safety Car being summoned while the wing was picked up. That reduced the gap of 3.5 seconds between Perez and Hamilton, but the Mercedes driver couldn’t attack on the restart.

A second chance came with a Virtual Safety Car period as Haas’s Mick Schumacher lost his front wing. Perez got the jump as the VSC ended, but the combination of Hamilton’s superior straight-line speed and the strength of the slipstream meant that on lap 18 he was able to lunge around the outside of him at the opening corner.

Perez remained close enough to use the DRS and get back ahead at turn four, but Hamilton repeated his move on the next lap and stayed ahead. The gaps then grew between leader Verstappen, Hamilton, Perez and Bottas until the first pit stop cycle began.

Hamilton was first of the lead group to switch from the medium compound to the hards on lap 26, with Verstappen and Perez doing so in the next two laps and then Bottas waiting longest as he aimed for the overcut. However he was called in on lap 30 as another VSC period began due to Stroll’s car shedding bodywork, and it meant Bottas could lose less time by pitting. He took the opportunity, and came out in third ahead of Perez.

The Mercedes was a faster car on the hard compound, and Hamilton closed the gap to Verstappen. Red Bull pitted their driver before he lost the lead to an overtake, and he lost a bit of time as Williams’ Nicholas Latifi emerged in front of him in the pit lane.

Mercedes responded by pitting Bottas, a move which he questioned the strategic value of as he exited behind Leclerc in fifth. Verstappen set a new fastest lap on his fresh tyres, and was going over a second per lap faster than Hamilton, and Perez pitted to make use of the same pace advantage.

Hamilton wanted to stay out as long as possible and then switch back to the medium compound, but Mercedes’ evaluation of the set he used in the first stint of the race suggested they would wear too quickly and summoned him on lap 43, three laps after Verstappen, for a second set of hard tyres.

The top two positions swapped, and the pair went into the final stint 2.6s apart. Perez took fastest lap off his team mate after passing Leclerc to get back into fourth, before Hamilton broke into the 1’11 territory and the gap to the lead shrunk to six tenths of a second.

On lap 48 the top two converged, and Hamilton used DRS to get onto the rear of Verstappen on the straight to turn four. He squeezed into a gap on the right of Verstappen, but as they entered the corner all of the asphalt was used up the championship leader and Hamilton had to open his steering to avoid a collision. Both ran way off the track, and as they rejoined Hamilton lost time as his squirmed with dirty tyres.

The stewards didn’t deem the incident worth investigating, but it put a pause on the lead fight for another 10 laps before Hamilton tried the outside of turn four again. This time he cleared Verstappen, despite the Red Bull weaving in defence, and from thereon the race victory was headed to Mercedes.

Verstappen dropped 10 seconds in the remaining 13 laps, and finished just under four seconds clear of Bottas, while Red Bull pitted Perez for a third time with two laps to go in an attempt to reclaim fastest lap.

Leclerc and Sainz stayed on the medium tyres when they pitted for the first time, and Leclerc overcut the rest of the front-runners to finish fifth. Sainz came sixth, while Pierre Gasly made an ambitious move on Alpine’s Esteban Ocon after his second pit stop to claim seventh.

Ocon led home his team mate Fernando Alonso in eighth, and McLaren’s Lando Norris picked up the final point in 10th despite dropping to the back and pitting on lap one with a puncture after colliding with Sainz at the start. On the other side of the McLaren garage it was even more stressful, as power unit problems hampered Daniel Ricciardo and eventually led to him retiring.